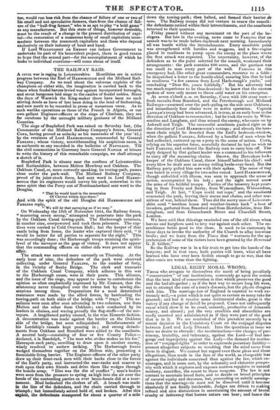 A cavu, war is raging in Leicestershire. Hostilities are in active progress between the Earl of HARBOROUGH and the Midland Rail- way Company. As we read about the valorous exploits of the champions on either side, the imagination is carried back to the times when feudal barons levied war against incorporated boroughs, and stout burgesses laid siege to the castles of feudal nobles. Since the days of Warwick the King-maker there have been no such stirring deeds as have of late been doing in the land of foxhunting, and now merit to be recorded in prose or numerous verse. As to such warlike operations as those of the French in Algeria, or our awn gallant Engineer-officers at the siege of Chatham, they are far outshone by the untaught military geniuses of the Midland Counties.

The siege of Stapleford Park was raised on Saturday last, (the Commander of the Midland Railway Company's forces, General COPE, having proved as unlucky as his namesake of the year '45,) by the retainers of Lord HARBOROUGH, commanded by General FABLING; whose victory, notwithstanding his suspicious name, is as authentic as any recorded in the bulletins of NAPOLEON. Till the civil commotions in Guernsey leave General NAPIER at leisure to write the history of this remarkable campaign, we shall attempt a sketch of it.

Stapleford Park is situate near the Confines of Leicestershire and Rutlandshire, between Melton Mowbray and Oakham. The Oakham Canal, or, more correctly speaking, its towing-path, passes close under the park-wall. The Midland Railway Company, proud of its joint-stock force, had sent word to Lord HARBO.• Ronan that its engineers would survey his park, somewhat in the same spirit that the Percy out of Northumberland sent word to the Douglas, "That he would hunt in the mountains Of Cheviot within days three."

-And with the spirit of the old Douglas did HARBOROUGH and FABLING reply, "We will let that surveying an if we may."

On Wednesday the 13th of November 1844, the Railway forces, a mustering seven strong," attempted to penetrate into the park by the Oakham Canal towing-path. The Harborough retainers, in number nine, overpowered and took them prisoners. The cap- tives were carried to Cold Overton Hall ; but the keeper of that castle being from home, the leader who captured them said, "it would be better for all parties to separate for the night." This was accordingly done; the Harborough troops retaining the spirit- level of the surveyor as the gage of victory. It does not appear that the commanding officers on either side were present at this affair.

. The attack was renewed more earnestly on Thursday. At the early hour of nine, the defenders of the park were observed c.ollecting, under General FABLING, to the number of forty, in the vicinity of Saxby Bridge. The clerk and treasurer of the Oakham Canal Company, which adheres in this war to the Harborough cause, were at their posts. This alliance, and the issue of the siege, may appear to some to corroborate the opinion so often emphatically expressed by Mr. COBDEN, that the aristocracy never triumphed over the towns but by sowing dis- aensions among them. Preparations for a most determined resistance were made by the allied forces, by barricading the towing:path on both sides of the bridge with " trays." The as- sailants were soon after seen advancing in two columns, one from Melton and the other from Oakham ; each conducted by its leaders in chaises and waving proudly the flag-staffs—of the sur- veyors. A lengthened parley ensued, in the true Homeric fashion. A demonstration was made against the barrier on the Oakham side of the bridge, but soon relinquished. Reinforcements of his Lordship's vassals kept pouring in ; and strong detach- ments from Oakham and Stamford were added to the assailants. A neutral body—consisting of four or five County Police— declared, a la Randolph, "The man who strikes makes us his foe." Hereupon each party, unwilling to draw upon it another enemy, wisely resolved to eschew striking. The Harborough forces wedged themselves together on the Melton side, presenting a formidable living barrier. The Engineer-officers of the other party drew up their front-rank men with their backs close to the forces of the Earl's party, and instructed the rear-ranks and reserve to rush upon their own friends and drive them like wedges through the hostile array. "Dire was the din of conflict "; men's bodies were seen from the pressure to spring as high into the air over the heads of the contending parties as ever lance-heads did at a tour- nament. Mud bedaubed the clothes of all. A breach was made in the line of the defenders, and the chain carried through in triumph; but immediately seized hold of, and broken. After this earitklet, the defendants scampered for about a quarter of a mile down the towing-path; then halted, and formed their barrier de nova. The Railway troops did not venture to renew the assault; the defendants retired within their iotrenchments, and the assailants returned to their quarters. 5 Friday passed without any movement on the part of the be- siegers. But late in the evening, news came to FABLING that an assault was to be made before daybreak next morning. Immediately all was bustle within the intrencliments. Every assailable point was strengthened with hurdles and waggons, and a fire-engine placed in readiness to pump upon the enemy at the place where the first attack was expected. The uncertainty, however, of the defenders as to the point selected for the assault, weakened their arrangements : the park contains 800 acres, and the garrison was too small to man every part of the wall. FABLING in this emergency had, like other great commanders, resource to a fable : he despatched a letter to the hostile chief, assuring him that he had in readiness "a few cannon from Lord Harborough's yacht," and concluding "Dear Sir, yours faithfully." But his adversary had too much experience to be thus deceived : he knew that the cannon spoken of were only meant to throw cold water on his enterprise.

At seven o'clock a. In. on Saturday, Core with 100 stout men— fresh recruits from Stamford, and the Peterborough and Midland Railways—swarmed over the park-paling on the side next Oakham ; and immediately four chains were in active operation. Captain LATHAM'S troop had been advanced, it is true, at an early hour in the direction of Oakham to reconnoitre; but he took the route by Whis- sendine and Langham, and thus missed the enemy, who came on by Ashwell and Teigh. The successful assailants pushed right on in the direction of Lord HARBOROUGH'S cottage; and already the fore- most chain might be descried from the Earl's bedroom-window, when the gallant FABLING, followed by a handful of men whom he had collected, cantered up on a pony to the scene of action. COPE, relying on his superior force, scornfully declared he had no wish to hurt FABLING, and ordered the Railway men to carry him off. The reply deigned by that gallant leader was a command to his followers to carry off the measuring-chains. Baows, the Herculean lock- keeper of the Oakham Canal, threw himself before his chief; and every blow he dealt sent an enemy rolling heels-over-head. But the Railway party galled him sore with their spikes. The noise of fray was heard in every village for two miles round. Lord Heanoaonua, though enfeebled with illness, was seen to approach the scene of action, accompanied by his lady ; and the sight nerved anew the arms of his faithful troops. Parties of the tenantry kept pour- ing in from Freeby and Saxby, from Wymondham, Whissendiue, and Teigh. At last, " Cope could not cope," and the assailants evacuated the park, leaving their staves and chains, and other mu- nitions of war, behind them. Thus did the merry men of Leicester- shire send " bootless home and weather-beaten back" a host of, invaders, gathered from Stamford and from Hertfordshire, from Bit.. mingham, and from Gracechurch Street and Churchill Street, London.

We have said that this siege reminded one of the old times when barons and burghers used to levy war against each other. The re- semblance holds good to the close. It used to be customary in those days to invoke the authority of the Church to allay intestine broils; and we learn from the Times that " warrants for the ap- prehension of some of the rioters have been granted by the Reverend G. E. Gillett."

So the Railway war is in a fair train to get into the hands of the lawyers ; and in that case, both parties will learn, what all have learned who have ever been foolish enough to go to war, that the after-costs are worse than the fighting.