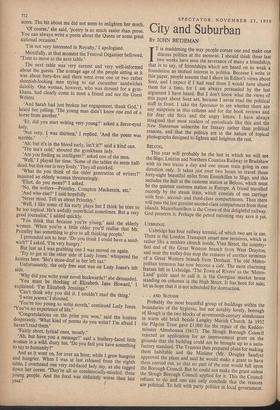 BY JOHN BETJEMAN IT is maddening the way people corner one and make one discuss politics at the moment. I should think these last two weeks have seen the severance of many a friendship, that is to say, of friendships which are based on so weak a foundation as mutual interest in politics. Because I write in this paper, people assume that I share its Editor's views about Suez, and 1 expect if I had read them I would have shared them for a time, for I am always persuaded by the last argument I have heard. But I don't know what the views of this paper about Suez are, because I never read the political stuff in front.. I take the Spectator to see whether there are any misprints in this column and for the book reviews and for dear old Strix and the angry letters. I have always imagined that most readers of periodicals like this and the New Statesman subscribe for literary rather than political reasons, and that the politics are in the nature of topical photographs designed to lighten and heighten the rest.

BELCOO, This year will probably be the last in which we will see the Sligo, Leitrim and Northern Counties Railway in Bradshaw with its two trains a day and one steam train going in one direction only. It takes just over two hours to travel those forty-eight beautiful miles from Enniskillen to Sligo, and this includes the halt at the customs station at Belcoo, which must be the quietest customs station in Europe. A friend travelled recently by the steam train, which consists of one carriage with first-, second- and third-class compartments. Thus there will pass the last genuine second-class compartment from these islands. Manorhamilton is the Crewe of this delightful railway. God preserve it. Perhaps the petrol rationing may save it yet.

Uxbridge has four railway termini, of which two are in use. There is the London Transport smart new terminus, which is rather like a modern church inside, Vine Street, the country- fied end of the Great Western branch from West Drayton, and near the trolley-bus stop the remains of another terminus of a Great Western branch from Denham. The old Metro- politan terminus has now become a café. The most charming feature left in Uxbridge, 'The Town of Rivers' as the 'Metro- Land' guide used to call it, is the Georgian market house standing on columns in the High Street. It has been for sale; let us hope that it is not scheduled for destruction.

Probably the most beautiful group of buildings within the boundaries of the hygienic, but not notably lovely, borough of Slough is the two blocks of seventeenth-century almshouses in warm old brick beside Langley Marish Church. In 1952 the Pilgrim Trust gave £1,000 for the repair of the Kedder- minster Almshouses (1617). The Slough Borough Council rejected an application for an improvement grant on the grounds that the building could not be brought up to a satis- factory standard. The Trustees then prepared plans for making them habitable and the Minister (Mr. Douglas Sandys) approved the plans and said he would make a grant to have them carried out. so that no part of the cost would fall upon the Borough Council. But he could not make the grant unless the Slough Borough Council applied for it. This the Council refuses to do and one can only conclude that the reasons are political. To hell with party politics in local government.