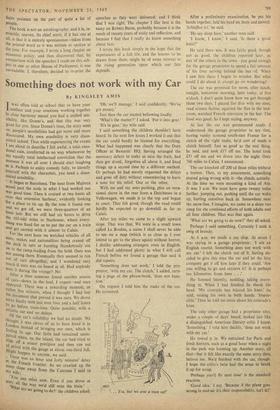 Something does not work with my Car

lWAS often told at school that to have your intellect and your emotions working together in close harmony meant you had a unified sen- sibility, like Donne's, and that this was very good for you. Since Donne's time, the story went On, people's sensibilities had got more and more dissociated. My own sensibility is very disso- ciated indeed. Thus while experiencing the events I am about to describe I felt awful, a total emo- tional ruin, comforted in no way whatsoever by thy equally total intellectual conviction that the Moment it was all over I should start laughing at it. Perhaps to enjoy comedy fully, to identify Yourself with the characters, you need a disso- ciated sensibility. It began at Barcelona. The boat from Majorca nosed past the mole in what I had worked out Was good time. Then it cruised at two knots all over that extensive harbour, evidently looking for a place to tie up. By the time it found one and we got off, we were three-quarters of an hour late. But we still had six hours to drive the 165-odd miles to Narbonne, where every- thing was fixed for us to put the car on a train and get carried with it almost to Calais. For the next hour we watched vehicles of all sizes, makes and nationalities being craned off the deck in nets or bursting thunderously out on to the ramp leading from the hold. Ours was not among them. Eventually they seemed to run out of cars altogether, and I wondered very much if ours was on board at all. Had anybody seen it during the voyage? No.

After a time someone found another source of cars—down in the keel, I expect—and ours appeared. There was a rewarding moment, or rather five minutes, when I thought I had lost the document that proved it was ours. We drove away finally with just over four and a half hours to go before train-time. Quite possible, with a reliable car and no delays.

Of the car's reliability we had no doubt. We thought it was clever of us to have hired it in London instead of bringing our own, which is feeling its ts age. Our faith had remained unim- paired a ired when, on the island, the car had tried to de off a

minor precipice and then run out Might with the gauge at about one-third full. Might happen to anyone, we said.

there was an hour and forty minutes' delay steep the French frontier. As we crawled up the e 13 slope away from the Customs I said to my wife: 1(on can relax now. Even if you drove at sixty all the way we'd still miss the train.' What are we going to do?' the children asked.

Just then the car started bellowing loudly. `What's the matter?' I asked. 'Put it into gear.' `It's in gear,' my wife said.

I said something the children shouldn't have heard. In the next few hours I worked it out that the car could hardly be blamed for everything. What had happened was clearly that the Duty Officer at Bastards' HQ, having arranged the necessary delays to make us miss the train, had then got drunk, forgotten all about it, and fixed things up a second time by a different method. Or perhaps he had merely organised the delays and gone off duty without remembering to leave a note for his relief. One or the other.

With me and my sons pushing, plus an occa- sional shove in the rear from a Dutchman in a Volkswagen, we made it to the top and began to coast. That felt good, though the road could hardly be expected to go downhill as far as Calais.

After ten miles we came to a slight upward slope. That was that. We were in a small town called Le Boulou, a name I shall never be able to see on a map (which is as close as I ever intend to get to the place again) without horror. I dislike addressing strangers even in English, but I had addressed plenty in what I will call French before we found a garage that said it did repairs.

'Something does not work,' I told the pro- prietor, 'with my car. The clutch,' I added, turn- ing a page of the phrase-book, 'does not func- tion.'

On request I told him the make of the car. He screamed.

. Yes, but we sent a man up!' After a preliminary examination, he put his hands together, laid his head on them and snored. 'Schlagen id,' he said.

He said there was. It was fairly good, though not as good, the children reported later, as any of the others in the town—just good enough for the garage proprietor to spend a fair amount of his time serving behind the bar of. When I saw him there I began to wonder. But what could I do about it, except go on wondering?

The car was promised for noon, after lunch, tonight, tomorrow morning, later today, at five o'clock. I don't quite know how we got through those two days. I played liar dice with my sons, read science fiction, squirted the flies in the bed- room, watched French television in the bar. The food was good. So I kept saying, anyway.

At last the car was pronounced ready. I understood the garage proprietor to say that, having vainly scoured south-east France for a clutch of the right make, he'd sort of made a clutch himself. Just as good as the real thing, he said, and took £17 off me. The hotel took £31 off me and we drove into the night. Only 760 miles to Calais, I announced.

The car knocked off 200 of those miles without a tremor. Then, to my amazement, something started going wrong with it—the clutch, actually.

At the time we were mounting a kind of Alp. It was 3 a.m. We must have gone twenty miles farther, jumping out, pushing until the car woke up, hurling ourselves back in. Somewhere near the snow-line, I imagine, we came to a slope too steep for the combined efforts of both adults and all four children. That was that again.

`What are we going to do now?' they all asked. Perhaps I said something. Certainly I took a swig of brandy.

At 6 a.m. we made a car slop. At seven I was saying to a garage proprietor: 'I am an English tourist. Something does not work with my car.' I left the clutch out of it, having de- cided to give this man the car and let the hire company get it off him later if they could. 'Are you willing to go and retrieve it? It is perhaps ten kilometres from here . .

He listened intently, nodding, taking every- thing in. When I had finished he shook his head. 'My comrade has injured his knee,' he said, seizing his own in both hands. 'Impos- sible.' Then he told me more about his comrade's knee.

The only other garage had a proprietor who, under a couple of days' beard, looked just like a distinguished American literary critic I know. `Something,' I told him thickly, 'does not work with my car.'

He towed it in. We entrained for Paris and fresh horrors, such as a good hour when a night in the park was looming up. Another story, all that—but it felt like exactly the same story then, believe me. We'd finished with the car, though. I hope the critic's twin had the sense to break it up for scrap.

`Perhaps you'll fly next time' is the standard reaction.

`Good idea,' I say. 'Because if the plane goes wrong in mid-air it's their responsibility, isn't it?'