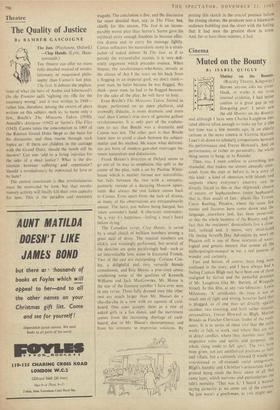 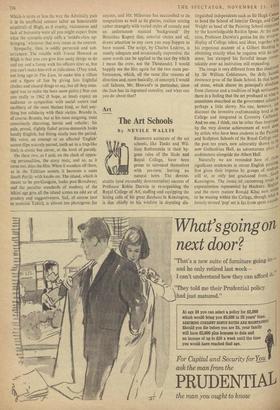 Muted on the Bounty

By ISABEL QUIGLY Mutiny on the Bounty. (Royalty Theatre, Kingsway.)

BEFORE anyone asks me point-

blank, or works it out from • internal evidence, I had better confess to a great gap in mY

e17▪ 7-71; film-going past: I never saw the old Mutiny on the Bounty, and although I have seen Charles Laughton imi- tated almost often enough to make up for it (the last time was a few months ago, in an elderly cartoon at the news cinema in Victoria Station), I can't sit down to scholarly comparisons between his performance and Trevor Howard's. And on performance, or rather on personality, the whole thing seems to hang; or to flounder.

Then, too, I must confess to something less shameful, that makes me almost absurdly inter- ested, from the start or before it, in a story of this kind: a kind of obsession with islands and outposts where everyone's ancestry can be directly traced to this or that shipWreck, chance of nature, or haphazardness (more haphazard, that is, than usual) of fate: places like Tristan, Cocos Keeling, Pitcairn, where the • same few names and features have come down and the language, elsewhere lost, has been preserved; so that the whole business of the Bounty and the fact that the mutineers' descendants live a close- knit, isolated and. it seems, very strait-laced life (being Seventh Day Adventists by now) 09 Pitcairn still is one of those mixtures of socio- logical and genetic interest that arouse all the anthropOlogist-nianque in me, a real passion of wonder and curiosity.

Fact and fiction, of course, have long been confused in the story, and I have always had a feeling Captain Bligh may have been one of those maligned by fiction and the powerful presence of Mr. Laughton (like Mr. Barrett, of Wirnpole Street). In this film, at any rate (director: Lewis Milestone; 'A' certificate), the issue is not s° much one of right and wrong, however hard that is plugged, as of one man set directly against another, two towering, and both rather miscast, personalities, Trevor Howard as Bligh, Marlon Brando as Fletcher Christian. leader of the muti- neers. It is in terms of these two that the story works or fails to work, and where they are not in direct conflict, where they stumble over their respective roles and spirits and purposes. the whole thing tendS to fall apart. The ta, ,) have been given, not just antithetical positions as hero and villain, but a curiously stressed (I would say overstressed or off-stressed) social antagonism. Bligh's humble and Christian's.aristocratic back- ground being ,made the basic cause of all that came later, which narrows and particularises the tale's morality. 'That was it,' I heard a woman saying earnestly as we came out of the cinema: 'he just wasn't a gentleman, as you might saY. Which is more or less the way the Admiralty puts it in its unofficial censure (after an honourable acquittal) of Bligh, as if cruelty, viciousness and lack of humanity were all you might expect from what the synopsis coyly calls a 'middle-class up- bringing.' whatever that may mean in the context.

Sympathy, then, is oddly perverted and sub- terranean. The trouble with frevor Howard as Bligh is that you can give him nasty things to do and say and a funny walk his officers titter at, but you can't make him evil or ridiculous. (They tried, not long ago in The Lion, to make him a villain and a figure of fun by giving him frightful clothes and absurd things to say, but all they man- aged was to make the hero seem paltry.) Nor can you really in 1962 (I hope, at least) expect an audience to sympathise with social sneers and snobbery of the most blatant kind, or feel any- thing but solidarity with their victim. Brando is, of course, Brando, but at his most outgoing. most consciously charming, heroic and volatile: his pale, proud, slightly faded prima-donnaish looks hardly English, but fitting nicely into the period. His voice, an attempt at an affected 'English' accent (lips scarcely parted, teeth set in a trap-like line), is comic but clever, at the level of parody.

On these two. as I said, on the clash of oppos- ing personalities, the story rests; and so, as it turns out, does the film. When it wanders off them, as in the Tahitian scenes, it becomes a mere South Pacific with knobs on. The island, which is meant to be pre-Gauguin, looks post-Broadway; and the peculiar standards of modesty of the bikini age give all the island scenes an odd air of prudery and suggestiveness. Sail, of course (not to mention Tahiti), is almost too photogenic for anyone, and Mr. Milestone has succumbed to its temptations as well as its glories, realism mixing rather strangely with varied styles of comedy and an unfortunate musical 'background' (by Bronislau Kaper) that, celestial choirs and all, draws attention to any corn you may happen to have missed. The script, by Charles Lederer, is mostly adequate and occasionally impressive; the same words can be applied to the cast (by which 1 mean the crew, not the Thousands). I would happily see the film again for the two main per- formances, which, all the same (for reasons of direction and, more basically, of concept),'I would call failures, Mr. Howard's in particular; since the face has its ingrained morality, and what can you do about that?