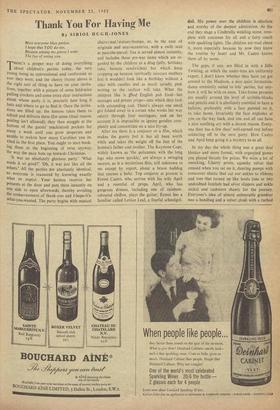 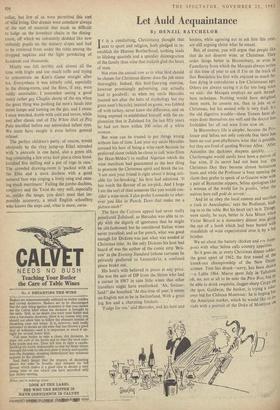 Thank You For Having Me

Most everyone likes parties. I hope that YOU do too.

Because among my guests I want The fun of seeing you.

PT HERE'S a proper way of doing everything

about children's parties today, the very Young being as conventional and conformist as ever they were, and the cheery rhyme above is the right sort of thing to have on your invita- tions, together with a picture of some field-mice Pulling crackers and some extra clear instructions about whose party it is, precisely how long it lasts and where to go to find it. Once the invita- tions are filled up, the hostess takes them to school and delivers them (for some ritual reason, posting isn't allowed); they then snuggle at the bottom of the guests' mackintosh pockets for many a week until you grow desperate and unable to reckon how many Carolines you in- vited in the first place. You ought to start book- ing them at the beginning of term anyway, the way the pace hots up towards Christmas. `It was an absolutely glorious party.' What made it so good?"0h, it was just like all the others.' All the parties are absolutely identical, so everyone is reassured by knowing exactly what to expect. Your hostess receives her presents at the door and puts them instantly on one side to open afterwards, thereby avoiding the embarrassment of thank-you and 1-hope-it's- what-you-wanted. The party begins with musical chairs/mat/statues/bumps, or, in the ease of originals and near-eccentrics, with a swift stab at pass-the-parcel. Tea is served almost instantly, and includes those pre-war items which are re- garded by the children as a drag (jelly, birthday cake, banana sandwiches) but which keep cropping up because spiritually insecure mothers feel it wouldn't look like a birthday without a cake with candles and as much spindly pink writing as the surface will take. What the children like is nod English pub food—hot sausages and potato crisps—into which they tuck with astounding zeal. There's always one small girl folded away in a corner who works her way calmly through four meringues, and on her account it is impossible to ignore goodies com- pletely and concentrate on a nice fry-up.

After tea there is a conjuror or a film, which makes the guests feel it has all been worth while and takes the weight off the feet of the hostess's father and mother. The Keystone Cops, widely known as 'the policemen with the long legs who move quickly,' are always a swinging success, as is a mysterious film, still unknown to me except by report, about a brave bulldog that rescues a baby. Top conjuror at present is Ernest Castro, who arrives with his wife April and a roomful of props. April, who has gorgeous dresses, including one of rainbow- coloured chiffon, plays the guitar; Ernest has a familiar called Lettice Leaf, a fearful schoolgirl- doll. His power over the children is absolute and worthy of the deepest admiration. At the end they stage a Cinderella wedding scene, com- plete with costumes for all and a fairy coach with sparkling lights. The children are mad about it, more especially because by now they know the routine by heart and Mr. Castro knows them all by name.

The gaps, if any, are filled in with a little Twisting, at which the under-tens are uniformly expert. I don't know whether they have yet got around to the Madison, a nice quiet formation- dance eminently suited to tots' parties, but any- how it will be with us soon. Take-home presents are usually around the level of scribble-blocks and pencils and it is absolutely essential to have a balloon, preferably with a face painted on it, to take home. Invariably the face explodes at you on the way back, and one and all can have a nice soothing cry with a decent reason. Every- one then has a few days' well-earned rest before soldiering off to the next party. How Castro and April keep going is a mystery to us all.

In my day the whole thing was a great deal bleaker and more formal, with organised games you played fiercely for prizes. We wore a lot of smocking, Liberty prints, squashy velvet that creased when you sat on it, dancing pumps with cross-over elastic that cut our ankles to ribbons and toes that turned up like boats (one or two undoubted Jezebels had silver slippers and ankle socks) and cashmere shawls for the journey. Everyone's idea of almost unbearable grandeur was a handbag and a velvet cloak with a ruched collar, but few of us were permitted this sort of wild living. Our dresses were somehow always of the sort of material that made us difficult to lodge on the horsehair chairs in the dining. room, off which we constantly skidded like new unhandy pupils on the nursery slopes and had to be retrieved from under the table among the dropped napkins and the light powdering of hundreds and thousands.

Mostly one felt terribly sick almost all the time with fright and too much trifle and trying to concentrate on Kim's Game straight after tea. Everywhere it was bitterly cold, especially in the dining-room, and the films, if any, were oddly unsuitable. I remember seeing a good many rather gay Chaplin shorts of the era when the great thing was pushing fat men's heads into street lamps and turning on the gas, and I swear I once watched, dumb with cold and terror, while reel after classic reel of The White Hell of Pitz Pala unrolled before our astonished infant eyes. We must have caught it even before general release.

The perfect children's party, of course, would obviously be the ritzy jump-up Ethel attended with 'a parasole in one hand, also a green silk bag containing a few stray hair pins a clean hand- kerchief five shilling and a pot of rage in case.' The crowded drawing-room is 'packed with all the Elite and a stout duchess with a good natured face was singing a lively song and caus- ing much merriment.' Failing the jumbo duchess, conjurors and the Twist do very well, especially as, unlike the tango, you don't need that im- possible accessory, a small English schoolboy who knows the steps and, what is more, cares.