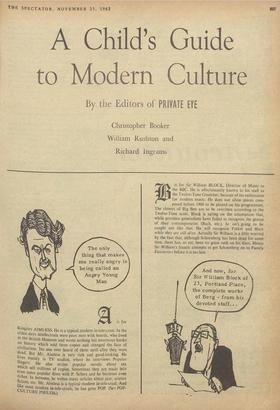 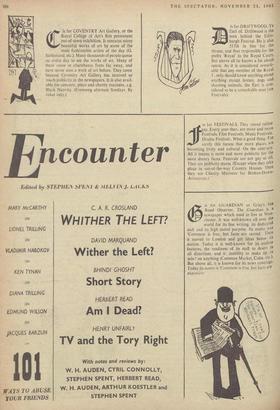 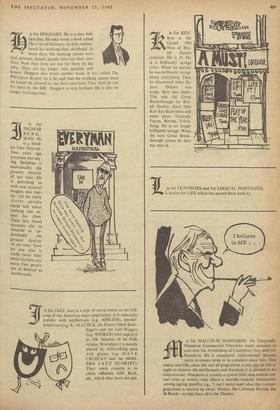 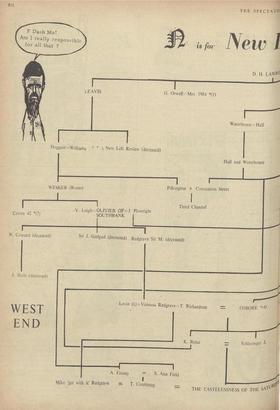 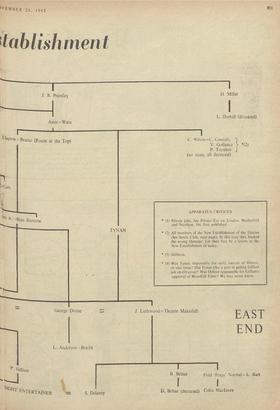 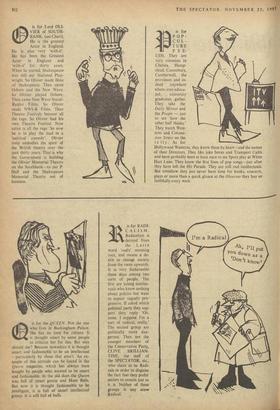 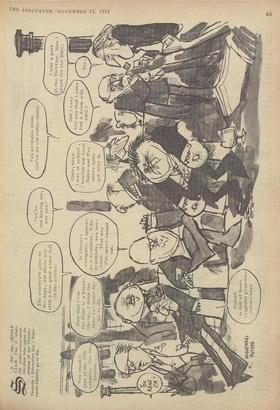 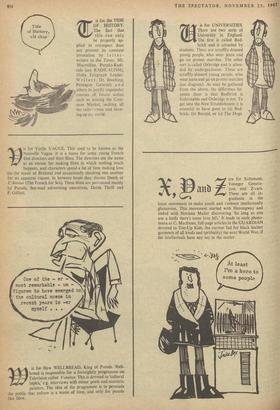 A Child's Guide to Modern Culture

By the Editors of PRIVATE EYE

Kingsley AIMLESS. He is a typical modern in-tele-ctual. In the 0..den days intellectuals were poor men with beards, who lived in the British Museum and wrote nothing but enormous books on history which sold three copies and changed the face of Civilisation. No one ever heard of them until after they were dead. But Mr. Aimless is very rich and good-looking. He lives mainly in TV studios, where he interviews Popular Singers. He also writes popular novels about sex which sell millions of copies. Sometimes they are made into even more popular films with P. Sellers and he becomes even richer. In between, he writes many articles about jazz, science fiction, etc. Mr. Aimless is a typical modern in-tele-ctual. And like most modern in-tele-ctuals, he has gone POP. (See POP- CULTURE PSEUDS.)

is for Sir William BLOCK, Director of Music to the BBC. He is affectionately known to his staff as the Twelve-Tone Gauleiter, because of his enthusiasm for modern music. He does not allow pieces corn- posed before 1900 to be played on his programmes. The chimes of Big Ben are to be rewritten according to the Twelve-Tone scale. Block is acting on the assumption that, while previous generations have failed to recognise the genius of their contemporaries (Bach, etc.), he isn't going to be caught out like that. He will recognise Finkel and Blatz while they are still alive. Actually Sir William is a little worried by the fact that, although Schoenberg has been dead for some time, there has, as yet, been no great rush on his discs. Hence Sir William's frantic attempts to get Schoenberg on to Family Favourites before it is too late, is for COVENTRY Art Gallery, or the Royal College of Art's first permanent out-of-town exhibition. It contains many beautiful works of art by some of the most fashionable artists of the day (G.

Sutherland, etc.). Many thousands of people queue UP every day to see the works of art. Many of them come in charabancs from far away, and have never seen a work of art before. They come because Coventry Art Gallery has received so much publicity in the newspapers. It is also avail- able for concerts, plays and charity matinees, e.g. Black Nativity. (Evensong alternate Sundays. By ticket only.) is for DRIFTWOOD, Ye Earl of. Driftwood is the man behind the Edin- burgh Festival. He is also 517th in line for the throne, and thus responsible for the prefix 'Royal' in the Royal Court. But above all he knows a lot about opera. As it is considered remark- able that any member of the Royal

.mily should know anything about anything except horses, dogs and shooting animals, the Earl is con- sidered to be a remarkable man (see Festivals).

1 is for FESTIVALS. They sound rather gay. Every year ther.: are more and more Festivals. Film Festivals. Music Festivals. Drama Festivals. What a good thing. For surely this means that more places are becoming lively and cultural. On the contrary. All it means is more and more publicity for the same dreary faces. Festivals are not gay at all. They arc publicity stunts. (Except when they take place in. out-of-the-way Country Houses. Then they are Charity Matinees for Broken-Down- Aristocrats.) is for GUARDIAN of Gray's Inn Road Observer. The Guardian is a newspaper which used to live in Man- chester. It was well-known all over the world for its fine writing. its dedicated stall and its, high moral purpose. Its motto was 'Comment is free, but facts are sacred.- Then it moved to London and got ideas below its station. Today it is well-known for its endless features, the readiness of its staff to desert In all directions, and it: inability to make up Its min-1 on anything (Common Market, Cuba. etc.). But above all, it is known for its news coverage. Today its motto is 'Comment is free. but facts are expensive

is for HOGGART. He is a very bril- liant don. He once wrote a book called The Uses of Illiteracy. In it he remem- bered his working-class childhood. In those days, the working classes were real, genuine, honest people who ran their own lives. Now their lives are run for them by the telly. They are no longer real, genuine and honest. Hoggart also wrote another book. It was called The Ptlkington Report. In it he said that the working classes must no longer be allowed to run their own lives. They must be run for them by the BBC. Hoggart is very brilliant. He is also no longer working-class.

31 is for INGMAR BE R G- M AN. He is a Swed- ish Film Director. Two years ago everyone was say- ing 'Bergman is undoubtedly the greatest director of our time. He is providing us w. ith new mystical insights into real- ity.' All the really clever people could talk about nothing else ex- cept his films. Then they found someone else to describe as 'un- doubtedly the greatest director of our time.' Now no one who is really clever talks about his films any more. Few people are as disloyal as intellectuals.

is for JAZZ. Jazz is a type of music based on the folk song of the American negro population. It is especially popular with intellectuals (e.g. AIMLESS), pseudo- Americans (e.g. K. ALLCOCK, the Elastic-Sided Boot- legger) and the Left-Wingers (e.g. WESKER) who regard it as OK because of its Folk origins. Nowadays it is mostly played by dull-looking men with glasses (e.g. DA V E CRUECUT and the MOD- ERN J A Z Z QUARTET). Their main concern is to claim affinities with Bach, etc., which they have not got.

iga is for KEN.

is for LEAVISITES and for LOGICAL POSITIVISTS. L is also for LIFE which has passed them both by.

Whenever Commercial Television wants someone to interview the Archbishop of Canterbury they send for Mandarin. He is considered 'controversial' because many reviewers write in to complain about him. This makes him OK, since this sort of programme is only put on late at night to impress the intellectuals and therefore it is allowed to be controversial. Mandarin is actually a cynical little man without any real views or beliefs, who affects a 'worldly wisdom' fashionable among ageing pundits, e.g., 'I can't understand what this younger generation is worked up about. Wesker, the Common Market, the H-Bomb—we had them all in the Thirties.' is for Lord OLI- VIER of SOUTH- BANK. (see Chart). He is the greatest Actor in England. He is also very `with-it'. He has been the Greatest Actor in England and `with-it' for thirty years. When he started, Shakespeare was still our National Play- wright. So Olivier made films of Shakespeare. Then came Osbore and the New Wave. So Olivier played Osbore. Then came New Wave Social- Realist Films. So Olivier made NWS-R Films. Then Theatre Festivals became all the rage. So Olivier had his own Theatre Festival. Now satire is all the rage. So now he is to play the lead in a 'satirical comedy'. Olivier truly embodies the spirit of the British theatre over the past thirty years. That is why the Government is building the Olivier Memorial Theatre on the Southbank—to put P. Hall and the Shakespeare Memorial Theatre out of business. is for P P - C U L - TURF P S E- UDS. They are very common in Chelsea, Hamp- stead, Canonbury, Camberwell, the provinces and in- deed anywhere where over-educa-

is for the QUEEN. Not the one who lives in Buckingham Palace. She has no time for culture. It is thought smart by some people to criticise her for this. But why should she? Because nowadays it is thought smart and fashionable to be an intellectual —particularly by those that aren't. An ex- ample of this attitude can be found in the Queen magazine, which has always been bought by people who wanted to be smart and fashionable. In the old days the Queen was full of smart gossip and Hunt Balls. But now it is thought fashionable to be intelligent, it is full of smart intellectual gossip. It is still full of balls. jais for RADI- CALISM. Radicalism is derived from the Latin word 'radix' meaning root, and means a de- sire to change society from the roots upwards. It is very fashionable these days among two sorts of people. The first are young intellec- tuals who know nothing about politics but want to appear vaguely pro- gressive. If asked which political party they sup- port they reply 'Oh, none. I suppose I'm a sort of radical, really.' The second group are politically more dan- gerous. They are the younger members of the Conservative Party, CLIVE BRILLIAN- TINE, the staff of the SPECTATOR, etc., who claim to be Radi- cals in order to disguise the fact that they prefer society to remain just as it is. Neither of these groups is any sebRe Radical. is for the TIDE

The fact that this can only

is for Vieille VAGUE. This used to be known as the Nouvelle Vague. It is a name for some young French film directors and their films. The directors use the name as an excuse for making films in which nothing much happens, and characters spend a lot of time making love (to the music of Brahms) and occasionally shooting one another for no apparent reason. In between bouts they discuss Death or L'Amour (The French for Sex). These films are patronised mainly by Pseuds, Sex-mad advertising executives, Derek Thrill and P. Gilliatt.

is for Hew WELLBREAD, King of Pseuds. Well- bread is responsible for a fortnightly programme on Television called Vomitor. This is devoted to 'cultural topics,' e.g. interviews with minor, poets and eccentric painters. The idea of the programme is to persuade the public that culture is a waste of time, and only for pseuds like Hew.

are for Xcitement, Younger Genera- tion and Z-cars. These are all in- gredients in the latest movement to make youth and violence intellectually glamorous. This movement started with Hemingway and ended with Norman Mailer discovering `So long as you use a knife there's some love left.' It leads to such pheno- mena as C. Machines, full-page articles in the GUARDIAN devoted to Ton-Up Kids, the current fad for black leather garments of all kinds and (probably) the next World War, if the intellectuals have any say in the matter.