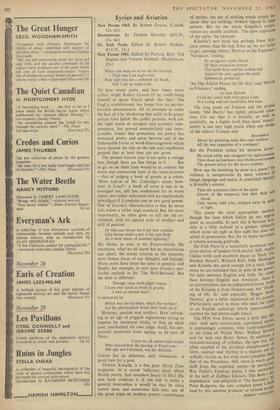 When you were an acorn on the tree-top, Then was I an eagle-cock; Now that you are a withered old block, Still I am an eagle-cock.

To how many poets, and how many more critics, might Robert Graves (if he could bring himself to quote Yeats) speak like that? The EngLit establishment has found him an uncom- fortable phenomenon. All its attempts to make the best of it by blanketing him softly in its gooey polyps have failed. His public persona, with just the right touch of arrogant and eccentric inde- pendence, has proved unassimilable and unen- cystable. Under that protection, his poetry has remained poetry and never become any of the fashionable forms of word disarrangement which have claimed the title on the sole and insufficient ground that at least they are not prose.

The present Graves year is not quite a vintage one, though there are fine things in it. . . . But to go on on these lines would be to commit the worst and commonest fault of the verse-reviewer —that of judging a book of poems as a whole. `More typical of Mr. Coleridge's talent, how- ever, is Lewti': a book of verse is not to be averaged out, still less condemned for its worst lapses, but rather welcomed with joy (particularly nowadays) if it contains one or two good poems. One of Graves's characteristics is that he never falls below a rather high standard. But, far more importantly, he often gives us still the old ex- citement, with his special style of intellect and skill of passion: Or who can blame me if my hair crackles Like thorns under a pot, if my eyes flash As it were sheets of summer lightning?

His theme, as ever, is the Ewigweihliche. He maintains, what we all know but no theoretician can admit, the sexual relation as the intensest, most honest focus of our thoughts and feelings. Many poets have done the same in general; and Hardy, for example, is very near Graves's par- ticular outlook in his 'The Well-Beloved.' But the tone is different: Though, since troth-plight began,

I have ever stood as bride to groom,

I wed no mortal man!

Which was the Goddess, which the woman? Let the philosophers break their teeth on it! Humour, passion and intellect. How refresh- ing in an age of priggish sophomores trying to impress by unnatural tricks, to find an adult poet, unashamed, his own judge. Adult, but per- petually preserved from ageing; as he says of Oisin: Curse me all squint-eyed monks

Who misconstrue the passing of Finn's son: Old age, not Fairyland, was his delusion.

Graves has no delusions, only obsessions: a good state for a poet.

Thomas Kinsella is a fine poet. (Even Time magazine, in a recent ludicrous piece about British poetry, had somehow heard of this.) His new book confirms it. If one had to make a general reservation it would be that he often teeters near, and sometimes falls into, one of the great traps of modern poetry—contrivance

SPECTATOR. NOVEMBER 23, 1962 of epithet, the use of striking words simply be cause they are striking, without regard to their aptness. But on the whole Kinsella's contri. vances are usually justified: 'The slow implosion of my pulse,' for example.

Kinsella's new book has perhaps fewer first- class poems than his last. Even so, we are lucky to get, amongst others, 'Portrait of the Engineer'; `Navigator,' ending,

So navigators under threat Of their extinction overset The harsh horn and the hollow bell Against the reef, against the swell Ephemeral, perpetual;

`An Old Atheist Pauses by the Sea'; and 'Mirror

in February,' ending, In slow distaste I fold my towel with what grace I can,

Not young and not renewable, but man. The long poem on Truman and the atomic bomb, 'Old Harry,' has rightly attracted atten- tion. (To say that it is morally, as well 11 poetically, on a higher level than most 'atomic' poetry is not very high praise when one thinks of the others.) Truman sees About his gleaming table like steel children

All the war organisms of a continent!

But the President makes his decision alone: He raved softly and struggled for righteousness, Then chose in loneliness near the blurred curtains The greater terror for the lesser number. How can the bombing be done in a poem? Its, violence is inexpressible by mere violence of image, language and metre. A controlled rhetoric is Kinsella's answer :

Then the notorious cities of the plain

Groves of the temporal, lost their flesh and blood, Tiles, leaves, wild cries, stripped away by gales of light.

This seems the most appropriate method,

though the lines which follow do not appear quite as successful. In part this is because Kin- sella is a little inclined to a gnomic obliquity which looks all right at first sight but does Or admit of penetration. But, for its many successes' a volume arousing gratitude. Six Irish Poets is a beautifully produced non" cross-section of modern Irish poetry. Still, Austin Clarke (with such excellent pieces as 'Early Un- finished Sketch'), Richard Kell, John MontaflO and Kinsella are good enough for a start. Once more we are reminded that, in spite of the power- ful links between English and Irish, far closer than between English and American, there is no provincialism, but an independent focus. Some of the Kinsella is from Downstream, but 'Think: ing of Mr. D,' and especially `Baggot Street Deserta,' give a fuller impression of his power!: (Particularly useful to those who read the latter in an English anthology which unaccountably omitted the last twenty-eight lines.) The PEN New Poems seems a little thin this year. And mere contrivance, reprobated WI is depressingly common, with word-badminton in the styles of Walter Pater, Wallace Steven; and (so help me) Henry James. In addition' misunderstanding of syllabics, the new fad, has often resulted in the practical abandonment of form, cadence and rhythm c)thm in a manner not s0 wilfully vicious as, but even more complete thadib that of the Poundians. Still, there is much P,. stuff from the expected names—in particif13`, Roy Fuller's Faustian pieces. I was astonished at the skill of Zulfikar Ghose's 'The Bod Y.5 1. Et: dependence,' and delighted at The Secretary,, nvre Peter Redgrove, the only complete poem ha 5 read by this talented producer of twisted SCraPT