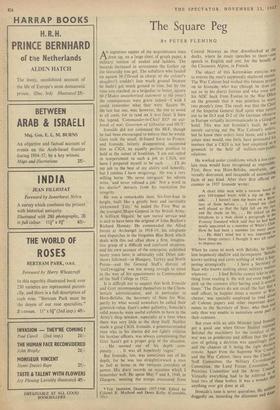 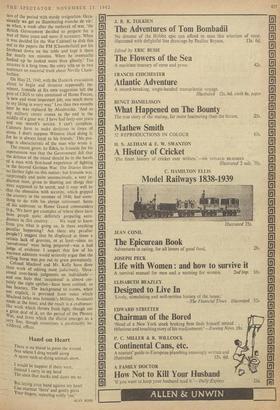 The Square Peg BY PETER FLEMING iv ingenious sapper of my

acquaintance once drew up, on a large sheet of graph paper, a military version of snakes and ladders. The

hazards increased in seriousness the farther up the hierarchy you got. The subaltern who landed

on square 10 (Drunk in charge of the colonel's daughter') couldn't lose much ground because he hadn't got much ground to lose; but by the time you reached, as a brigadier or better, square 60 ('Makes unauthorised statement to the press') the consequences were grave indeed—I wish I could remember what they were. Square 99, the last but one, was, however, the one to avoid at all costs, for to land on it was fatal; it bore the legend, 'Commander-in-Chief BEF on out- break of war: Governor of Gibraltar and OUT.'

Ironside did not command the BEF, though he had been encouraged to believe that he would. Gort took the small, ill-found force to France, and Ironside, bitterly disappointed, succeeded him as CIGS, an equally perilous position to hold at the outset of hostilities. 'I am not suited in temperament to such a job as CIGS, nor have I prepared myself to be such. . . I'll do my job to the best of my ability and honestly, but I confess I have misgivings.' He was a very willing horse. `He never intrigued.' his editors write, 'and never refused a job.' Not a word in his diaries* detracts from his reputation for integrity.

He was a remarkable man. Six-foot-four in height, built like a grizzly bear and inevitably nicknamed 'Tiny,' he ended the First War as the youngest Major-General in the British Army. A brilliant linguist, he saw varied service and is said to have been the original of John Buchan's Richard Hannay. He commanded the Allied forces at Archangel in 1918-19; his telegrams and dispatches in the forgotten Blue Book which deals with this sad affair show a firm, imagina- tive grasp of a difficult and confused situation, and his own account of the enterprise, published many years later, is admirably told. Other side- shows followed—in Hungary, Turkey and North Persia—and the General Staff's distrust of `scallywagging' was not strong enough to stand in the way of his appointment as Commandant of the Staff College in 1922.

It is difficult not to suspect that both Ironside and Gort recommended themselves to the Cham- berlain administration, and in particular to Hore-Belisha, the Secretary of State for War, partly by what would nowadays be called their gimmick-value. God's sober gallantry, Ironside's solid panache were useful exhibits to have in the Army's shop window, especially at a time when there was very little in the shop itself. Neither made a good CIGS. Ironside, a generous-minded man who in his diaries did not lightly criticise his brother officers, was always complaining that Gort 'hasn't got a proper grip of the situation. . . . He seemed out of his depth com- pletely. . . . It was all hopelessly vague.'

But Ironside, too, was sometimes out of his depth, for he was too straightforward a man to feel at home -in the tortuous corridors of power. His diary records an occasion which I remember well. He spent May 7 and 8, 1940, in Glasgow, meeting the troops evacuated from

* THE IaoNsine DIARIES 1937-1940. Edited by Colonel R. Macleod and Denis Kelly. (Constable, 35s.) Central Norway as they disembarked at the docks, where he made speeches to them-011e, speech in English and one, for the benefit of the Chasseurs Alpins, in French.

The object of this Kerenskian exercise Was to restore the men's supposedly shattered morale; The War Cabinet had wished this fatuous project on to Ironside, who was (though he does not say so in his diary) furious and who even sent his ADC back from Euston to the War Office on the grounds that it was pointless to waste, two people's time. The result was that the Chief of the Imperial General Staff spent what turned out to be D-3 and D-2 of the German offensive in Europe virtually incommunicado in a Glasgow hotel. This was not Ironside's fault, be Was merely carrying out the War Cabinet's orders; but he knew their orders were inane, and a more astute man would, one feels, have persuaded his masters that a CIGS is not best employed as a gimmick in the field of welfare-cum-Public relations.

He worked under conditions which a less res°'

lute man would have recognised as impossible. First, there was Hore-Belisha, unreliable, uni- versally distrusted, and incapable of assimilating facts of any kind. After their first official ell' counter in 1937 Ironside wrote: A short little man with a curious breed of grey felt-topped boots with a zip up the in" side. . . . I haven't seen zip boots on a Secre" tary of State before. . . . I found my chair well placed so that the light fell on my face and the shade on his. . . . He talked on the telephone to a man about a paragraph in the Evening Standard which said that he had been newly appointed as a member of White's Club' How he had been a member for many Years' . . . He didn't mind but it was important to have things correct. I thought it was all rather to impress me. When he came to work with Belisha, he found him hopelessly shallow and incompetent. 'Bells° knows nothing and cares nothing of what is liafr pening strategically. . . . 1 have a Secretary of State who knows nothing about military matters whatever. . . . I find Belisha cannot take in any ,; thing from reading it. He will not even begin `I pick tip the contents after having read it sever-a_ times.' The Diaries do not recall the fact that 3 staff officer, in happier times a master at WI"; chester, was specially employed to read atoll" all Cabinet papers and other important doe tic d ments to the Secretary of State, who thus a° only thus was enable to assimilate some part their contents. But even with an able Minister (and Ironsic_4 le got a good one when Oliver Stanley replaTe Belisha) the machinery for the conduct of tilo, war was so ponderous and diffuse that the Pit w cess of getting a decision was appallingly s°„ and the chances of it being the right decisi°',

i_ remote. Apart from the Supreme War oun cli

of and the War Cabinet, there were the Chiefs._„ Staff Committee, the Military Co-ordinatif."0 Committee, the Land Forces Committee, Priorities Committee and the Army COUP Virtually everything had to be referred to least two of these bodies. It was a wonder l" anything ever got done at all. Ironside's tone is never querulous. He so(-diets doggedly on, recording the dilemmas and discs" ters of the period with sturdy resignation. Occa- sionally we get an illuminating tranche de vie:

British when, a week after the outbreak of war, the British Government decided to prepare for a war of three years and more if necessary. When It was decided [in the War Cabinet] to dish this out to the papers the PM [Chamberlain] put his

forehead down on the table and kept it there for nearly ten minutes. When he eventually looked up he looked more than ghastly.' Ten minutes is a long time; the entry tells us in two sentences an essential truth about Neville Cham- berlain.

about to begin and invasion supposedly im- minent, Ironside at his own suggestion left the post of CIGS to take command of Home Forces, 'a new and most important job, one much more to my liking in every way.' Less than two months later he was replaced by Alanbrooke. 'And so my military career comes to the end in the middle of a great war. 1 have had forty-one years and one month's service. 1 can't complain. Cabinets have to make decisions in times of stress. 1 don't suppose Winston liked doing it, for he is always loyal to his friends.' This pas- sage is characteristic of the man who wrote it.

The reason given, by Eden, to lronside for his

supersession was that the Government felt that the defence of the island should be in the hands o. f a man with first-hand experience of fighting in the Second German War. the Diaries throw no further light on this matter; but Ironside was, surprisingly and quite unconsciously, a very in- discreet man, given to blurting out things that were supposed to be secret, and it may well be that the obsession with security, which gripped the country in the summer of 1940, had some- thing to do with his abrupt retirement. Some of his addresses to Home Guard commanders (e.g., 'We have got examples of where there have been people quite definitely preparing aero- dromes in this country. . . . We want to know from you what is going on. Is there anything peculiar happening? Are there any peculiar People?') suggest that he displayed at times a *certain lack of gravitas, or at least—since no

aerodromes' were being prepared—was a bad judge of evidence. I suspect that few of his warmest admirers would seriously argue that the willing horse was put out to grass prematurely. Colonel Macleod and Mr. Kelly have done their work of editing most judiciously. 'Occa- sional over-harsh judgments on individuals'— and one feels that 'occasional' is almost cer- tainly the right epithet—have been omitted; so has hearsay. The background to events, when not explicit, is provided from notes which Macleod (who was Ironside's Military Assistant) made at the time; and the result is a craftsman- like work which throws fresh light, though not a great deal of it, on the period of the Phoney War, and from which the diarist emerges as a very fine, though sometimes a pardonably be- wildered, officer.