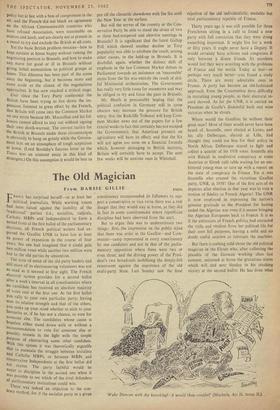 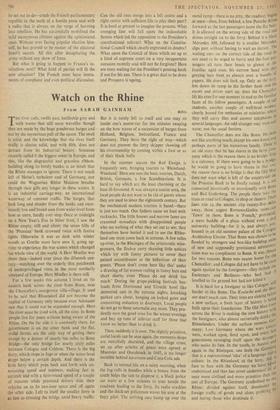 From DARSIE GILLIE PARIS FRANCE has surprised herself—or at least her political journalists. While warning voices had been raised against the inability of the `traditional' parties (i.e., socialists, radicals, Catholic MRPs and Independents) to form a united front at the first ballot of the parliamentary elections, all French political writers had ex- pected the Gaullist UNR to have lost at least its power of expansion in the course of four years. No one had imagined that it could gain two million votes while another two million were lost to the old parties by abstention. .The state of mind of the old party leaders and still more of its electioneering volunteers was not so mad as it seemed at first sight. The French electoral system provides for a second ballot after a week's interval in all constituencies where no candidate has received an absolute majority of votes cast at the first one. At the first ballot you rally to your own particular party; having seen its relative strength and that of the others, You make up your mind whether to stick to your favourite or, if he has not a chance, to vote for someone else. The candidates whose cause is hopeless either stand down with or without a recommendation to vote for someone else or Possibly remain in the fight with the simple Purpose of obstructing some other candidate. With this system it was theoretically arguable that to maintain the struggle between socialists and Catholic MRPs, or between MRPs and conservative Independents at the first ballot did not matter. The party faithful would be easier to discipline in the second one when it was possible to see which of the rival defenders of parliamentary institutions could win.

1 here was indeed an objection to the con- trary method, for if the socialist party in a given constituency recommended its followers to sup- port a conservative or vice versa there was a real danger that they would stay at home, as they did in fact in some constituencies where republican discipline had been observed from the start.

But to argue thus was to underestimate two things: first, the impression on the public mind that there was order in the Gaullist—and Com- munist—camp represented in every constituency by one candidate and not in that of the parlia- mentary opposition where there were two or even three; and the driving power of the Presi- dent's two broadcasts mobilising the deeply-felt resentment against the impotence of the old multi-party State. Last Sunday saw the final rejection of the old individualistic, unstable but vital parliamentary republic of France.

Thirty years ago it was still possible for three Frenchmen sitting in a café to found a new party with full conviction that they were doing something important. It might live for a week or fifty years. it might never have a Deputy. It would certainly have schisms and congresses if only between a dozen friends. Its members would feel they were wrestling with the problems of France and the world. Today at best—or perhaps very much better—you found a study circle. There are many admirable ones in France. A party has become an old-fashioned approach. Even the Communists have difficulty in recruiting young people, as their electoral re- cord showed. As for the UNR, it is carried on President de Gaulle's disdainful back and wins victories when he shouts.

Where would the Gaullists be without their great man? Most of them would never have been heard of. Soustelle, once elected at Lyons, and his ally Delbecque, elected at Lille, had thought they could use him for their policy in North Africa. Delbecque stayed to fight and collect a quarter of his 1958 votes. Soustelle sits with Bidault in meditative conspiracy at some Austrian or Greek café table waiting for an em- bittered young man to turn up with a report on the state of conspiracy in France. Yet it was Soustelle who created the victorious Gaullist party, UNR, in 1958! One of the first acts of its deputies after election in that year was to vote a motion of fidelity to French Algeria! The UNR is now employed in expressing the nation's genuine gratitude to the President for having ended the Algerian war even if it means bringing the Algerian Europeans back to France. It is as if the extremists of French politics had extracted the virile and virulent from her political life for their own fell purposes, leaving a mild and no doubt useful mixture .to lubricate the machine.

But there is nothing mild about the old political magician in the Elysee who, after collecting the plaudits of the German working class last summer, unloosed at home the gratuitous storm which will end next Sunday in his crushing victory at the second ballot. He has done what 'Wake Duncan with thy knocking!-1 would thou couldst!' (Macbeth, Act It. Scene II.)

he set out to do—crush the French parliamentary republic in the teeth of a hostile press and with a radio that is always on the verge of bursting into rebellion. He has successfully mobilised the mild anonymous citizens against the opinionated ones. Without ever facing popular election him- self, he has proved to be master of the electoral heart's secrets. All this after decapitating the army without any show of force.

But what is going to happen to France's in- stitutions next? What kind of parties will fit the new situation? The French must have instru- ments of complaint and even political discussion.

Can the old ones merge into a left centre and a right centre with sufficient life to play their part? It is hard at present to imagine the process. What avenging fate will fall upon the indissoluble Senate which led the opposition to the President's constitutional reform? What on the Constitu- tional Council which clearly expressed its doubts? What upon the Council of State which set up as a kind of supreme court on a very inopportune occasion recently and will not be forgiven? Here are trees waiting for the President's pruning hook if not for his axe. There is a great deal to be done and Prospero is ageing.