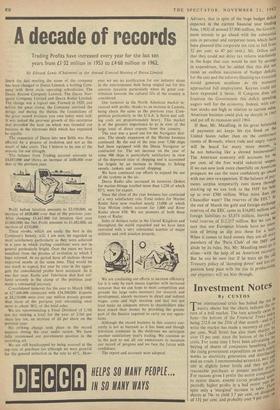 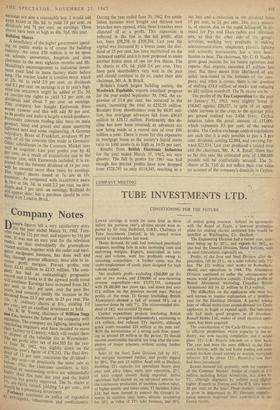 THE international crisis has halted the rise equity shares but the charts indicate the in turn of a bull market. The turn actually canleA:g June—the bottom of the Financial Tittles being 252.8 on the 25th of that month—and 3515 write the market has made a recovery of over per cent. Wall Street has also risen sharply by over 13 per cent. since the bottom of the Cub,ahe crisis. For some time I have been advocating the buying of shares of companies benefiting ftfiic the rising government expenditure on such Pu`: works as electricity generation and distribull°,1 and on roads. I recommended RE YROLLE, BICC 3111 GEC at slightly lower levels and they are .st,s, reasonable purchases at present market PrIcrit5 For reasons given I prefer the motor comP°tIee-,t. to motor shares. JOSEPH LUCAS produced °lad" e. pettedly higher profits in a bad motor Ye3,1..thoo spite only a 'marginal' increase in sales. ,ends

earnings are also a reasonable buy. I would add EVER READY at 38s. 6d. to yield 2.9 per cent. on dividends and 71 per cent. on earnings. These shares have been as high as 48s. 7+d. this year. Building Shares

A beneficiary of the higher government spend- ing on public works is of course the building industry. An extra £70 million is to be spent On schools, universities, hospitals and slum clearance in the next eighteen months and Mr. Maudling's encouragement to industrial invest- ment must lead to more factory starts before long. The market leader is LONDON BRICK which at 23s. 9d. to yield 2.9 per cent. on dividends and 8.1 per cent. on earnings is at its year's high. REDLAND HOLDINGS might be added at 21s. 3d. ex one-for-one rights to yield 3.2 per cent: on dividends and about 7 per cent. on earnings. This company has bought Eastwoods from RUGBY CEMENT and this will add 50 per cent. to its profits and make it largely a brick-producer. Previously concrete roofing tiles were its main product. Sand and gravel and stone quarrying followed next and some engineering. A German subsidiary, Braas of Frankfurt, produces 90 per cent. of all the concrete tiles made in Germany. Other subsidiaries in the Common Market may well be acquired. Last year profits rose by 42 Per cent. as a result of acquisitions and in the current year, with Eastwoods included, it is ex- pected that the forecast dividend of 14 per cent. will be covered more than twice by earnings. The :rights' shares issued at 7s. are at I5s. Premium. As compared with ELLISTOWN BRICK 4-TILE at 18s. 3d. to yield 2.2 per cent. on divi- dends and 7 per cent. on earnings, Redland do

appear dear; but a purchase should be com- bined with London Brick.