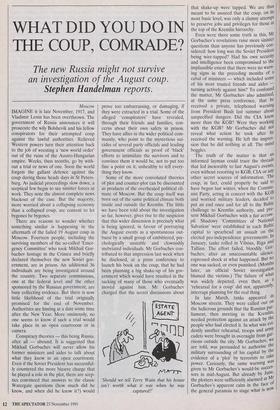 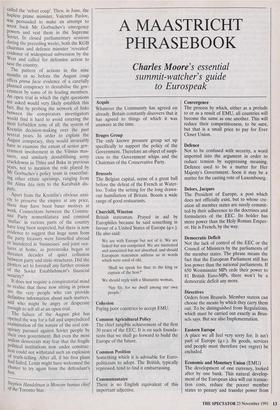 WHAT DID YOU DO IN THE COUP, COMRADE?

The new Russia might not survive an investigation of the August coup.

Moscow IMAGINE it is late November, 1917, and Vladimir Lenin has been overthrown. The government of Russia announces it will prosecute the wily Bolshevik and his fellow conspirators for their attempted coup against the lawful authorities. Relieved Western powers turn their attention back to the job of wresting a 'new world order' out of the ruins of the Austro-Hungarian empire. Weeks, then months, go by with- out a trial or news of one. Soon the world forgets the gallant defence against the coup during those heady days in St Peters- burg. As judicial proceedings slow down, a sceptical few begin to see sinister forces at work. They note the almost complete news blackout of the case. But the majority, more worried about a collapsing economy than a collapsed coup, are content to let bygones be bygones.

There are reasons to wonder whether something similar is happening in the aftermath of the failed 19 August coup in Moscow. Fourteen people, including the surviving members of the so-called 'Emer- gency Committee' who took Mikhail Gor- bachev hostage in the Crimea and briefly declared themselves the new Soviet gov- ernment, are in prison. An additional 36 individuals are being investigated around the country. Two separate commissions, one at the federal level and the other sponsored by the Russian government, are busy collecting evidence. But there is now little likelihood of the trial originally promised for the end of November. Authorities are hinting at a date some time after the New Year. More ominously, no one seems to know if such a trial would take place in an open courtroom or in Camera.

Conspiracy theories — this being Russia, after all — abound. It is suggested that Mikhail Gorbachev will never allow his former ministers and aides to talk about what they know in an open courtroom. Even if the Soviet President has successful- ly countered the more bizarre charge that he played a role in the plot, there are scep- tics convinced that answers to the classic Watergate questions (how much did he know, and when did he know it?) would prove too embarrassing, or damaging, if they were extracted in a trial. Some of the alleged 'conspirators' have revealed, through their friends and families, con- cerns about their own safety in prison. They have allies in the wider political com- munity, who point to the mysterious sui- cides of several party officials and leading government officials as proof of 'black' efforts to intimidate the survivors and to convince them it would be, not to put too fine a point on it, unhealthy to tell every- thing they know.

Some of the more convoluted theories of plot and counter-plot can be discounted as products of the overheated political cli- mate of Moscow. But the coup itself was born out of the same political climate both inside and outside the Kremlin. The little we have been told about the investigation so far, however, gives rise to the suspicion that this wider dimension is precisely what is being ignored, in favour of portraying the August events as a spontaneous out- burst by a small group of embittered, psy- chologically unstable and clownishly inebriated individuals. Mr Gorbachev con- tributed to that impression last week when he disclosed, at a press conference to launch his book on the coup, that he had been planning a big shake-up of his gov- ernment which would have resulted in the sacking of many of those who eventually moved against him. Mr Gorbachev charged that the secret discussions about 'Should we tell Terry Waite that his house isn't worth what it was when he was captured?' that shake-up were "tapped. We are thus meant to be assured that the coup, on its most basic level, was only a clumsy attempt to preserve jobs and privileges for those at the top of the Kremlin hierarchy.

Even were there some truth in this, Mr Gorbachev's revelations raise more sinister questions than anyone has previously con- sidered: how long was the Soviet President being wire-tapped'? Had his own security and intelligence been compromised to the implausible extent that there were no warn- ing signs in the preceding months of a cabal of ministers — which included some of his most trusted friends and aides — turning actively against him? To confound the matter, Mr Gorbachev also admitted, at the same press conference, that he received a private, telephoned warning from President Bush last summer about unspecified dangers. Did the CIA know more than the KGB? Were they working with the KGB? Mr Gorbachev did not reveal what action he took after he received the warning. He left the impres- sion that he did nothing at all. The mind boggles.

The truth of the matter is that an informed layman could trace the threads that led inexorably to last August's events, even without resorting to KGB, CIA or anY other secret sources of information. The coup, in fact, could properly be said to have begun last winter, when the Commu- nist Party, acting in concert with the KGB and worried military leaders, decided to put an end once and for all to the Baltic challenge to Kremlin authority, and pre- sent Mikhail Gorbachev with a fait accom- pli. Shadowy 'Committees of National Salvation' were established in each Baltic capital to spearhead an assault on the elected pro-independence governments. hi January, tanks rolled in Vilnius, Riga and Tallinn. The effort failed, bloodily. Gor- bachev, after an unaccountable silence, expressed shock at what happened. But 110 one was sacked, or even punished. (Months later, an official Soviet investigation blamed the victims.) The failure of what was widely depicted, even then, as a 'rehearsal for a coup' did not, apparently, .interrupt planning for the real thing. In late March, tanks appeared in Moscow streets. They were called out on the ludicrous grounds that the Russian Par- liament, then meeting in the Kremlin, needed protection against an attack by th.e people who had elected it. In what was evi- dently another rehearsal, troops and arillY cadets were brought in overnight from gar- risons outside the city. Mr Gorbachev, we are told, was persuaded to authorise the military surrounding of his capital by the evidence of a 'plot' by terrorists to take power. Curiously, the same warning was given to Mr Gorbachev's would-be succes- sors in mid-August. But already by June' the plotters were sufficiently alarmed at Mr. Gorbachev's apparent calm in the face ot the general paranoia to stage what is no

called the 'velvet coup'. Then, in June, the hapless prime minister, Valentin Pavlov, was persuaded to make an attempt to wrest back Mr Gorbachev's emergency Powers and vest them in the Supreme Soviet. In closed parliamentary sessions during the preceding weeks, both the KGB chairman and defence minister 'revealed' evidence of widespread subversion by the West and called for defensive action to save the country. The pattern of actions in the nine months or so before the August coup Offers prima facie evidence of a carefully planned conspiracy to destabilise the gov- ernment by some of its leading members. An open trial in which the right questions are asked would very likely establish this fact. But by probing the network of links between the conspirators investigators would find it hard to avoid entering the most forbidden zone of all: the system of Kremlin decision-making over the past several years. In order to explain the August conspiracy, they would invariably have to examine the extent of senior gov- ernment involvement in the Vilnius mas- sacre, and similarly destablilising army crackdowns in Tblisi and Baku in previous years, not to mention the role played by Mr Gorbachev's policy team in exacerbat- ing other ethnic uprisings, ranging from the Alma Ata riots to the Karabakh dis- pute.

Apart from the Kremlin's obvious anxi- ety to preserve the empire at any price, there may have been baser motives at work. Connections between the Commu- nist Party nomenklatura and criminal mafias' in various parts of the country have long been suspected, but there is now evidence to suggest that huge sums from the party treasury were funnelled abroad or laundered in 'businesses' and joint ven- tures at home, as perestroika began to threaten decades of quiet collusion between party and state structures. Did the Plotters act to forestall any further erosion Of the Soviet Establishment's financial security?

It does not require a conspiratorial mind to realise that those now sitting in prison are the very people who can provide definitive information about such matters, and who might be angry or desperate enough to tell all at an open trial.

The failure of the August plot has opened the way for a full and unprejudiced examination of the nature of the real con- sPiraq pursued against Soviet people by their own government. But even the most ardent democrats may fear that the fragile Political institutions now under construc- tion could not withstand such an explosion of truth-telling. After all, if his first plans had failed, Lenin might have welcomed the Chance to try again from the defendant's box.

Stephen Handebnan is Moscow bureau chief of the Toronto Star.