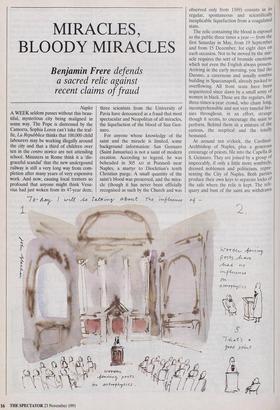 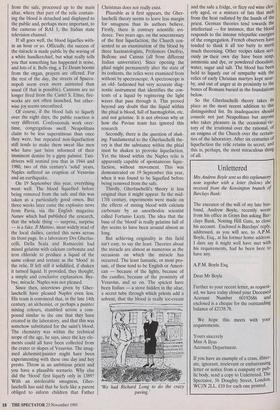 a sacred relic against recent claims of fraud

Naples A WEEK seldom passes without this beau- tiful, mysterious city being maligned in some way. The Pope is distressed by the Camorra, Sophia Loren can't take the traf- fic, La Repubblica thinks that 100,000 child labourers may be working illegally around the city and that a third of children over ten in the centra stork° are not attending school. Ministers in Rome think it a 'dis- graceful scandal' that the new undergound railway is still a very long way from com- pletion after many years of very expensive work. And now, causing local tremors so profound that anyone might think Vesu- vius had just woken from its 47-year doze,

three scientists from the University of Pavia have denounced as a fraud that most spectacular and Neapolitan of all miracles, the liquefaction of the blood of San Gen- naro.

For anyone whose knowledge of the saint and the miracle is limited, some background information: San Gennaro (Saint Januarius) is not a saint of modern creation. According to legend, he was beheaded in 305 AD at Pozzuoli near Naples, a martyr to Diocletian's tenth Christian purge. A small quantity of the saint's blood was preserved, and the mira- cle (though it has never been officially recognised as such by the Church and was observed only from 1389) consists in its regular, spontaneous and scientifically inexplicable liquefaction from a coagulated state.

The relic containing the blood is exposed to the public three times a year — from the first Saturday in May, from 19 September and from 15 December, for eight days on each occasion. Not to be moved by the mir- acle requires the sort of bromide emotions which not even the English always possess. Arriving in the early morning, you find the Duomo, a cavernous and usually sombre building in Spaccanapoli, already packed to overflowing. All front seats have been sequestered since dawn by a small army of women in black. These are the regulars, the three-times-a-year crowd, who chant long, incomprehensible and not very tuneful lita- nies throughout, in an effort, strange though it seems, to encourage the saint to perform. Behind them sit a mixture of the curious, the sceptical and the totally bemused.

At around ten o'clock, the Cardinal Archbishop of Naples, plus a generous entourage of priests, file into the Capella di S. Gennaro. They are joined by a group of impeccably, if only a little more sombrely, dressed noblemen and politicians, repre- senting the City of Naples. Both parties produce their own keys to separate locks of the safe where the relic is kept. The reli- quary and bust of the saint are withdrawn

from the safe, processed up to the main altar, where that part of the relic contain- ing the blood is detached and displayed to the public and, perhaps more important, to the cameras of RAI 1, the Italian state television channel.

If all goes well, the blood liquefies with- in an hour or so. Officially, the success of the miracle is made public by the waving of a white handkerchief, but what really tells you that something has happened is noise, and lots of it. Bells ring, a Te Deum booms from the organ, prayers are offered. For the rest of the day, the streets of Spacca- nopoli seem even more animated than usual (if that is possible). Cannons are no longer fired from the Castel S. Elmo, fire- works are not often launched, but other- wise joy seems unconfined.

Of course, if the blood fails to liquefy over the eight days, the public reaction is very different. Confessionals work over- time, congregations swell. Neapolitans claim to be less superstitious than once they were, but repeated non-liquefaction still tends to make them sweat like men who have just been informed of their imminent demise by a gipsy palmist. Taxi- drivers will remind you that in 1944 and 1980, two of this century's 'solid' years, Naples suffered an eruption of Vesuvius and an earthquake.

On 19 September this year, everything went well. The blood liquefied before being removed from the safe and this was taken as a particularly good omen. But three weeks later came the explosive news from Pavia, via the English magazine Nature which had published the research, that the whole thing — surprise, surprise — is a fake. 11 Mattino, most widely read of the local dailies, carried this news across its front page. In a laboratory Drs Gherlas- celli, Della Scala and Ramaccini had mixed gelatine with calcium carbonate and iron chloride to produce a liquid of the same colour and texture as the 'blood' in the relic. If left still it solidified, if shaken it turned liquid. It provided, they thought, a simple and conclusive explanation. Bye- bye, miracle. Naples was not pleased.

Since then, interviews given by Gher- laschelli have pleased Naples even less. His team is convinced that, in the late 14th century, an alchemist, or perhaps a painter mixing colours, stumbled across a com- pound similar to the one that they have created in the laboratory, and that this was somehow substituted for the saint's blood. The chemistry was within the technical scope of the age, he says, since the key ele- ments could all have been collected from the crater or slopes of Vesuvius. The imag- ined alchemist/painter might have been experimenting with these one day and hey presto. Throw in an ambitious priest and you have a plausible scenario. Why else did the 'blood' first liquefy only in 1389? With an intolerable smugness, Gher- laschelli has said that he feels like a parent obliged to inform children that Father Christmas does not really exist.

Plausible as it first appears, the Gher- laschelli theory seems to leave less margin for smugness than its authors believe. Firstly, there is contrary scientific evi- dence. Two years ago, on the sexcentenary of the first liquefaction, the Church con- sented to an examination of the blood by three haematologists, Professors Onofrio, Bollone and Cannas (all from different Italian universities). Since opening the phial might permanently alter the state of its contents, the relics were examined from without by spectroscope. A spectroscope is an old- fashioned but very accurate diag- nostic instrument that identifies the con- tents of a liquid by registering the light waves that pass through it. This proved beyond any doubt that the liquid within the phial is blood, full of haemaglobin, etc. and not gelatine. It is not obvious why or how the Pavian team has ignored this research.

Secondly, there is the question of shak- ing. Fundamental to the Gherlaschelli the- ory is that the substance within the phial must be shaken to provoke liquefaction. Yet the blood within the Naples relic is apparently capable of spontaneous lique- faction, without movement This was demonstrated on 19 September this year, when it was found to be liquefied before being removed from the safe.

Thirdly, Gherlaschelli's 'theory is less original than it might appear. In the mid- 17th century, experiments were made on the effects of mixing blood with calcium carbonate by an unorthodox scientist called Fortunio Liceti. The idea that the base of the 'blood' is really gelatine full of dye seems to have been around almost as long.

But achieving originality in this field isn't easy, to say the least. Theories about the miracle are almost as numerous as the occasions on which the miracle has occurred. The least fantastic, or most pro- saic, of these tend to be English or Ameri- can — because of the lights, because of the candles, because of the proximity of Vesuvius, and so on. The spiciest have been Italian — a stove hidden in the altar, a secret tube through which priests add a solvent, that the blood is really ice-cream 'We had Richard Long to do the crazy paving.'

and the safe a fridge, or fizzy red wine clev- erly aged, or a mixture of fats that melt from the heat radiated by the hands of the priest. German theories tend towards the intellectual — for instance, that the blood responds to the intense telepathic energies of the congregation. French observers have tended to think it all too batty to merit much theorising. Other recipes taken seri- ously in, their own day have been soap, ammonia and dye, or powdered chocolate, water, sugar and salt. The blood has been held to liquefy out of sympathy with the relics of early Christian martyrs kept near- by, and out of anger at its proximity to the bones of Romans buried in the foundations below.

So the Gherlaschelli theory takes its place as the most recent addition to this distinguished list. Its inadequacies should console not just Neapolitans but anyone who takes pleasure in the occasional vic- tory of the irrational over the rational, of an enigma of the Church over the certain- ties of the laboratory. After six centuries of liquefaction the relic retains its secret, and this is, perhaps, the most miraculous thing of all.