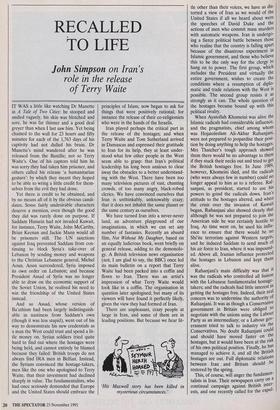 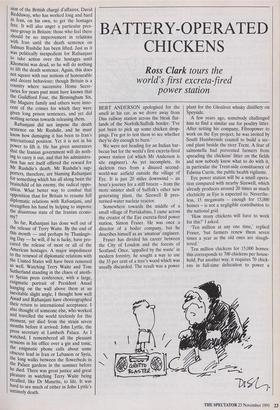 role in the release of Terry Waite

IT WAS a little like watching Dr Manette in A Tale of Two Cities: he stooped and smiled vaguely, his skin was blotched and sore, he was far thinner and a good deal greyer than when I last saw him. Yet being chained to the wall for 23 hours and fifty minutes for each of the 1,763 days of his captivity had not dulled his brain. Dr Manette's mind wandered after he was released from the Bastille; not so Terry Waite's. One of his captors told him he was sorry they had taken him prisoner, and others called his release 'a humanitarian gesture': by which they meant they hoped to be able to wring a little credit for them- selves from the evil they had done.

Yet there is credit to be obtained, and by no means all of it by the obvious candi- dates. Some fairly undesirable characters deserve a mention, even though the good they did was rarely done on purpose. If Saddam Hussein had not invaded Kuwait, for instance, Terry Waite, John McCarthy, Brian Keenan and Jackie Mann would all be prisoners still. The UN sanctions against Iraq prevented Saddam from con- tinuing to block Syria's take-over of Lebanon by sending money and weapons to the Christian Lebanese general, Michel Aoun. Aoun surrendered, Syria imposed its own order on Lebanon; and because President Assad of Syria was no longer able to draw on the economic support of the Soviet Union, he realised his need to win the friendship of the United States instead.

And so Assad, whose version of Ba'athism had been largely indistinguish- able in nastiness from Saddam's own (though it was less stupid), went out of his way to demonstrate his new credentials as a man the West could trust and spend a lit- tle money on. Syrian soldiers tried quite hard to find out where the hostages were being held, and cannot entirely be blamed because they failed: British troops do not always find IRA men in Belfast. Instead, the Syrians convinced the hostage-takers, men like the one who apologised to Terry Waite, that their investment had declined sharply in value. The fundamentalists, who had once seriously demanded that Europe and the United States should embrace the principles of Islam, now began to ask for things that were positively rational; for instance the release of their co-religionists who were in the hands of the Israelis.

Iran played perhaps the critical part in the release of the hostages; and when Terry Waite and Tom Sutherland arrived in Damascus and expressed their gratitude to Iran for its help, they at least under- stood what few other people in the West seem able to grasp: that Iran's political leadership his long been anxious to clear away the obstacles to a better understand- ing with the West. There have been too many television pictures of vast, chanting crowds, of too many angry, black-robed clerics. We have convinced ourselves that Iran is unthinkably, unknowably crazy; that it does not inhabit the same planet or the same century as ourselves.

We have turned Iran into a never-never land, an adventure playground of our imaginations, in which we can set any number of fantasies. Recently an absurd film, Not Without My Daughter, based on an equally ludicrous book, went briefly on general release, adding to the demonolo- gy. A British television news organisation (not, I am glad to say, the BBC) once led its main bulletin on a report that Terry Waite had been packed into a coffin and flown to Iran. There was an artist's impression of what Terry Waite would look like in a coffin. The organisation in question later apologised; but many of its viewers will have found it perfectly likely, given the view they had formed of Iran.

There are unpleasant, crazy people at large in Iran, and some of them are in leading positions. But because we hear lit-

'His Maxwell story has been killed in mysterious circumstances.' tie other than their voices, we have as dis- torted a view of Iran as we would of the United States if all we heard about were the speeches of David Duke and the actions of men who commit mass murders with automatic weapons. Iran is undergo- ing a fierce political battle between those who realise that the country is falling apart because of the disastrous experiment in Islamic government, and those who believe this to be the only way for the clergy to hang on to power. The first group, which includes the President and virtually the entire government, wishes to create the conditions where a resumption of diplo- matic and trade relations with the West is possible. The second group resists it as strongly as it can. The whole question of the hostages became bound up with this political rivalry.

When Ayatollah Khomeini was alive the Islamic radicals had considerable influence, and the pragmatists, chief among whom was Hojatoleslam Ali-Akbar Rafsanjani, were not prepared to jeopardise their posi- tion by doing anything to help the hostages. Mrs Thatcher's tough approach showed them there would be no advantage to them if they stuck their necks out and tried to get the British hostages free. In June 1989, however, Khomeini died, and the radicals (who were always few in number) could no longer appeal to him as to a referee. Raf- sanjani, as president, started to use his powers to grind the radicals down. Iran's attitude to the hostages altered, and when the crisis over the invasion of Kuwait began, Rafsanjani also showed clearly that although he was not prepared to join the American side he was certainly hostile to Iraq. As time went on, he used his influ- ence to ensure that there would be no Shi'ite terrorism against Western targets, and he induced Saddam to send much of his air force to Iran, where it was impound- ed. Above all, Iranian influence protected the hostages in Lebanon and kept thern alive.

Rafsanjani's main difficulty was that it was the radicals who controlled all liaison with the Lebanese fundamentalist hostage takers; and the radicals had little interest in getting the hostages free. Indeed, their real concern was to undermine the authority 01 Rafsanjani. It was as though a Conservative government in Britain were obliged to negotiate with the unions using the Labour Party as an intermediary; or a Labour gov- ernment tried to talk to industry via the Conservatives. No doubt Rafsanjani could and should have moved faster on the hostages, but it would have been at the risk of his own political position. Finally, he has managed to achieve it, and all the British hostages are out. Full diplomatic relations between Iran and Britain should be restored by the spring. This, of course, will anger the fundamen- talists in Iran. Their newspapers carry on a continual campaign against British Inter- ests, and one recently called for the expul-

sion of the British chargé d'affaireS, David Reddaway, who has worked long and hard in Iran, on his own, to get the hostages free. It will also anger a particular pres- sure-group in Britain: those who feel there should be no improvement in relations With Iran until the death sentence on Salman Rushdie has been lifted. Just as it was politically inexpedient for Rafsanjani to take action over the hostages until .Khomeini was dead, so he will do nothing to lift the death sentence. Again, this does not square with our notions of honourable and decent behaviour; though Britain is a country where successive Home Secre- taries for years past must have known that the Guildford Four, the Birmingham Six, the Maguire family and others were inno- cent of the crimes for which they were given long prison sentences, and yet did nothing serious towards releasing them.

Rafsanjani did not impose the death sentence on Mr Rushdie, and he must know how damaging it has been to Iran's international position. Yet it is not in his Power to lift it. He has given assurances that the Iranian government will do noth- mg to carry it out, and that his administra- tion has not itself offered the reward for Mr Rushdie's death. Mr Rushdie's sup- Porters, therefore, are blaming Rafsanjani for something which has all along been the brainchild of his enemy, the radical oppo- sition. What better way to combat that oPposition than for Britain to resume full diplomatic relations with Rafsanjani, and strengthen his hand by helping to improve the disastrous state of the Iranian econo- my?

So far, Rafsanjani has done well out of the release of Terry Waite. By the end of this month — and perhaps by Thanksgiv- ing Day — he will, if he is lucky, have pro- cured the release of most or all of the American hostages. A major impediment to the renewal of diplomatic relations with the United States will have been removed as well. Watching Terry Waite and Tom Sutherland standing in the chaos of anoth- er .Syrian press conference, with a large, enigmatic portrait of President Assad hanging on the wall above them at an inevitable slight angle, I thought how well Assad and Rafsanjani have choreographed their return to international acceptance. I also thought of someone else, who worked and travelled the world tirelessly for this moment, yet died from the strain seven months before it arrived: John Lyttle, the press secretary at Lambeth Palace. As I watched, I remembered all the pleasant sessions in his office over a gin and tonic, the enigmatic phone calls about some Obscure lead in Iran or Lebanon or Syria, the long walks between the flowerbeds in the Palace gardens in the summer before he died. There was great justice and great Pleasure in watching Terry Waite being recalled, like Dr Manette, to life. It was hard to see much of either in John Lyttle's Untimely death.