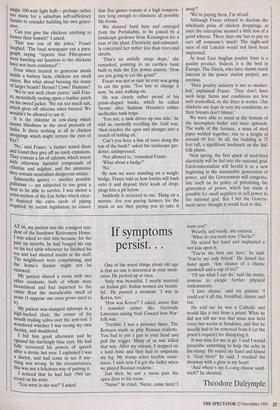 AT 66, my patient was the youngest resi- dent of the Sundown Retirement Home. I was asked to visit him because, for the past six months, he had banged his cup on his bed table whenever he finished his tea and had shouted insults at the staff. The neighbours were complaining, and the home's licence might not be renewed.

My patient shared a room with two Other residents, both of whom were Incontinent and had imparted to the entire floor the ineradicable smell of 9rine (I suppose one soon grows used to My patient was slumped sideways in a high-backed chair, the corner of his Mouth trailing saliva over the arm-rest. I wondered whether I was seeing my own destiny, and shuddered.

I bid him good afternoon and he Opened his startlingly blue eyes. He had fully recovered his powers of speech after a stroke last year. I explained I was a doctor, and had come to see if any- thing was wrong. In the circumstances, this was not a felicitous way of putting it. I noticed that he had Italy 1944 tat- tooed on his wrist.

You were in the war?' I asked. One of the worst things about old age is that no one is interested in your mem- ories. He perked up at once.

'Italy was beautiful. I nearly married an Italian girl. Italian women are beauti- ful.' He paused a moment. 'I was in Korea, too.'

'How was Korea?' I asked, aware that I sounded rather like Gertrude Lawrence asking Noel Coward how Nor- folk was: 'Terrible. I was a prisoner there. The Koreans made us play Russian roulette. You had to put a gun to your head and pull the trigger. Many of us was killed that way. After my release, I stepped on a land mine and they had to amputate my leg. My stump aches terrible some- times. I wish now I'd got the bullet when we played Russian roulette.'

Just then, he saw a nurse pass the open door to his room.

'Nurse!' he cried. 'Nurse, come here! I want you!' Wearily, and warily, she entered.

'What do you want now, Charlie?'

He seized her hand and implanted a wet kiss upon it.

'You're the best one here,' he said. 'You're my only friend.' He kissed her hand again. 'Any chance of a cheese sandwich and a cup of tea?'

'I'll see what I can do,' said the nurse, anxious to escape further physical endearments.

'I love cheese,' said my patient. 'I could eat it all day, breakfast, dinner and tea.'

He told me he was a Catholic and would like a visit from a priest. What he did not tell me was that mass was held every two weeks at Sundown, and that he usually had to be removed from it (at the priest's request) for disrupting it.

It was time for me to go. I said I would prescribe something to help the ache in his stump. He seized my hand and kissed it. 'God bless!' he said. I reached the doorway with a glow in my heart.