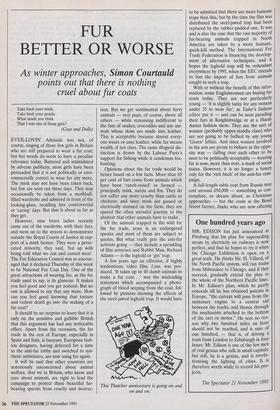 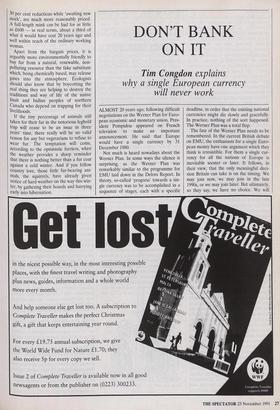 points out that there is nothing cruel about fur coats

(Guys and Dolls) EVER-LOVIN' Adelaide was not, of course, singing of those few girls in Britain who are still prepared to wear a fur coat; but her words do seem to have a peculiar relevance today. Battered and intimidated by adverse publicity, most girls have been persuaded that it is not politically or envi- ronmentally correct to wear fur any more. The mink may not have been taken back, but few are seen out these days. They may occasionally be taken from a mothball- filled wardrobe and admired in front of the looking-glass, recalling less controversial or 'caring' days. But that is about as far as they get.

However, nine brave ladies recently came out of the wardrobe, with their furs, and went on to the streets to demonstrate outside the Royal Courts of Justice in sup- port of a mink farmer. They were a perse- cuted minority, they said, 'fed up with being told what we can and cannot wear'. The Fur Education Council was so encour- aged that it declared Thursday of this week to be National Fur Coat Day. One of the. great attractions of wearing fur, as the fur trade used to say, is its glamour. It makes you feel good and you get noticed. But no one is allowed to say that any more. How can you feel good knowing that torture and violent death go into the making of a fur coat?

It should be no surprise to learn that it is only on the sensitive and gullible British that this argument has had any noticeable effect. Apart from the recession, the fur trade in the rest of Europe, especially in Spain and Italy, is buoyant. European fash- ion designers, having deferred for a time to the anti-fur lobby and switched to syn- thetic substitutes, are now using fur again.

It will be said that other countries are notoriously unconcerned about animal welfare, that we in Britain, who know and care about animals, are right to lead the campaign to protect these beautiful fur- bearing species from cruelty and destruc- tion. But we get sentimental about furry animals — seal pups, of course, above all others — while remaining indifferent to the fate of snakes, crocodiles and any ani- mals whose skins are made into leather. This is acceptable because almost every- one wears or uses leather, while fur means wealth, if not class. The same illogical dis- tinction is drawn by the Labour Party's support for fishing while it condemns fox- hunting.

Opinions about the fur trade would be better based on a few facts. More than 85 per cent of furs come from animals which have been 'ranch-raised' or farmed — principally mink, nutria and fox. They do not suffer any more cruelty than cattle or chickens; and since mink are gassed or electrically stunned on the farm, they are spared the often stressful journey to the abattoir that other animals have to make.

Of the animals trapped in the wild for the fur trade, none is an endangered species and most of them are subject to quotas. But what really gets the anti-fur activists going — they include a sprinkling of film actresses and Rabbit Man, Richard Adams — is the leghold or 'gin' trap.

A few years ago an effective, if highly tendentious, video film, Lynx, was pro- duced. 'It takes up to 40 dumb animals to make a fur coat. . .' was the misleading statement which accompanied a photo- graph of blood seeping from the coat, fol- lowed by pictures showing the effects of the steel-jawed leghold trap. It would have 'This Thatcher anniversary is going on and on and on.' to be admitted that there are more humane traps than this, but by the time the film was distributed the steel-jawed trap had been replaced by the rubber-padded one. It was and is also the case that the vast majority of fur-bearing animals trapped in North America are taken by a more humane, quick-kill method. The International Fur Trade Federation is financing the develop- ment of alternative techniques, and it hopes the leghold trap will be redundant everywhere by 1995, when the EEC intends to ban the import of furs from animals caught in such a trap. With or without the benefit of this infor- mation, some Englishwomen are buying fur coats today. They are not particularly young — 'it is slightly tacky for any woman under 35 to wear fur', as Tatler's fashion editor put it — and can be seen parading their furs in Knightsbridge or at a Hardy Amies fashion show. They are the sort of women (probably upper-middle class) who are not going to be bullied by any young 'Green' lefties. And since women involved in the arts are prone to behave in the oppo- site way — falling over each other to be seen to be politically acceptable — wearing fur is now, more than ever, a mark of social status. However, it is no longer a luxury only for the 'rich bitch' of the anti-fur cam- paign.

A full-length sable coat from Russia may cost around £50,000 — something to con- template, or dream about, as Christmas approaches — but the coats at the Bond Street furrier, Jindo, who are now offering

30 per cent reductions while 'awaiting new stock', are much more reasonably priced. A full-length mink can be had for as little as £600 — in real terms, about a third of what it would have cost 20 years ago and well within reach of the ordinary working woman.

Apart from the bargain prices, it is arguably more environmentally friendly to buy fur from a natural, renewable, non- polluting resource than the fake substitute Which, being chemically based, may release gases into the atmosphere. Ecologists Should also know that by boycotting the real thing they are helping to destroy the traditions and way of life of the native Inuit and Indian peoples of northern Canada who depend on trapping for their livelihoods.

If the tiny percentage of animals still taken for their fur in the notorious leghold trap will cease to be an issue in three years' time, there really will be no valid reason for any but vegetarians to refuse to wear fur. The temptation will come. according to the optimistic furriers, when the weather provides a sharp reminder that there is nothing better than a fur coat against a cold winter. And if you follow Country lore, those little fur-bearing ani- mals, the squirrels, have already given notice of hard weather on the way this win- ter, by gathering their hoards and hurrying early into hibernation.