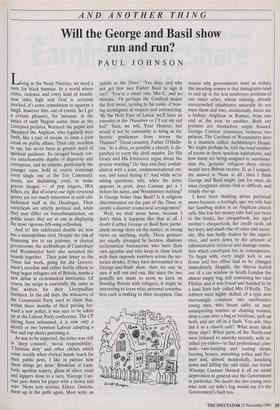 Will the George and Basil show run and run?

Living in the Nasty Nineties, we need a taste for black humour. In a world where crime, violence and every kind of beastli- ness rides high and God is certainly mocked, it's some consolation to squeeze a laugh, however thin, out of events, So I get a certain pleasure, for instance, in the antics of such Stygian comic duos as the Liverpool prelates, Warnock the papist and Sheppard the Anglican, who regularly strut forth, like a pair of ravens, to issue a joint croak on public affairs. Their city, needless to say, has never been in greater need of Spiritual guidance. Its ravaged beauty cov- ers unfathomable depths of depravity and corruption, and its citizens, particularly the Younger ones, hold in coarse contempt every single one of the Ten Command- ments, not disdaining, even, to make graven images — of pop singers, IRA killers, etc. But of course our right reverend gentry are not much interested in such old- fashioned stuff as the Decalogue. Their encyclicals are strictly political and, while they may differ on transubstantiation, on public issues they are at one in displaying the most rigorous left-wing orthodoxy.

And lo! this celebrated double act now has a metropolitan rival. Despite the risk of flouncing, not to say jealousy, in clerical greenrooms, the archbishops of Canterbury and Westminster have also mounted the boards together. Their joint letter to the Times last week, going for the Govern- ment's overdue and rather feeble efforts to keep bogus refugees out of Britain, marks a new debut in ecclesiastical histrionics. Of course the script is essentially the same as that written for their Liverpudlian brethren. In the old days, the wiseacres of the Communist Party used to claim that, Within three months of their putting for- ward a new policy, it was sure to be taken up at the Labour Party conference. The CP having been subsumed, it is now only a month or two between Labour adopting a line and top clerics parroting it.

. As was to be expected, the letter was rich in 'deep concern', 'moral responsibility', Christian duty' and other clichés which come readily when clerical hands reach for their public pens. I like to picture how these things get done. Breakfast at Lam- beth: spotless napery, glints of silver, toast and kippers done to a turn, tGeorge Can- tuar puts down his paper with a frown and says: 'News very serious, Eileen. Govern- ment up in the polls again. Must write an

epistle to the Times.' Yes dear, and why not get that nice Father Basil to sign it too?' You're a smart one, Mrs C, and no mistake.' Or perhaps the Cardinal makes the first move, turning to his ranks of bow- ing monsignori at vespers and announcing: 'By the Holy Face of Lucca, we'll have an interdict in the Thunderer or I'll eat my red hat!"Sure, we will, Your Honour, but would it not be raisonable to bring in the heretic gentleman from across the Thames?' Good casuistry, Father O'Hallo- ran.' So a dove, or possibly a cherub, is dis- patched to carry the draft missive. Do His Grace and His Eminence argue about the precise wording? Do they end their confab- ulation with a joint, undenominational ori- son, and kneel during it? And while we're asking questions, why, when the letter appears in print, does Cantuar get a t before his name, and Westminster nothing? Is George holier than Basil? Is it religious discrimination on the part of the Times or simply a discreet ecumenical arrangement?

Well, we shall never know, because I don't think it happens like that at all. I doubt if either George or Basil have partic- ularly strong views on the matter, or strong views on anything, really. These gestures are usually arranged by faceless, shadowy ecclesiastical bureaucrats who have their own agendas and who keep in close touch with their opposite numbers across the sec- tarian divides. If they have determined on a George-and-Basil show, then we can be sure it will run and run. But since the two pontiffs are made to seem so keen on flooding Britain with refugees, it might be interesting to know what personal contribu- tion each is making to their reception. One

reason why governments want to reduce the invading armies is that immigrants tend to end up in the less salubrious portions of our inner cities, whose existing, already overcrowded inhabitants naturally do not want them and who, incidentally, never see a bishop, Anglican or Roman, from one end of the year to another. Both our prelates are themselves amply housed. George Cantuar commutes between two palaces. The Cardinal of Westminster lives in a mansion called Archbishop's House. We might perhaps be told the total number of rooms in these spacious habitations, and how many are being assigned to accommo- date the 'genuine' refugees these clerics would have Britain receive. If, as I suspect, the answer is 'None at all', then I think George and Basil might, just for once, do what clergymen always find so difficult, and simply shut up.

I have been thinking about prelatical mores because, a fortnight ago, my wife had her handbag stolen in an Anglican chUrch café. She lost her money (she had just been to the bank), her chequebook, her aged mother's chequebook, her credit cards, all her keys, and much else of value and neces- sity. She was badly shaken by the experi- ence, and worn down by the amount of administrative retrieval and damage-iimita- lion which enveloped her in consequence. To begin with, every single lock in our house and her office had to be changed immediately. Happily, the thieves hurled out of a car window in South London the almost empty bag, still containing her vital Filofax, and it was found and handed in by a kind Irish lady called Mrs O'Reilly. The robbers were highly skilled, of a type now increasingly common: two unobtrusive young men, who haunt cafés, sit near unsuspecting tourists or chatting women, drop a coat over a bag or briefcase, pick up both, and are off in a flash. You ask: they did it in a church café? What more likely these days? When parts of the North-east were reduced to anarchy recently, with so- called joy-riders—in fact professional crim- inals—ram-banging and looting shops, burning houses, assaulting police and fire- men and, almost incidentally, knocking down and killing the odd child, our friend tGeorge Cantuar blamed it all on social deprivation in general and the Government in particular. No doubt the two young men who stole my wife's bag would say it's the Government's fault too.