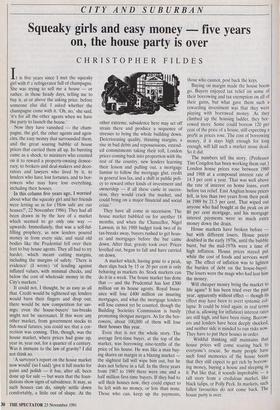 Squeaky girls and easy money five years on, the house party is over

It is five years since I met the squeaky girl with t! e refrigerator full of champagne. She was trying to sell me a house — or rather, in those heady days, telling me to buy it, at or above the asking price, before someone else did. I asked whether the champagne came with it. 'Oh, no,' she said, 'it's for all the other agents when we have the party to launch the house.'

Now they have vanished — the cham- pagne, the girl, the other agents and agen- cies, the easy money that surrounded them, and the great soaring bubble of house prices that carried them all up. Its bursting came as a shock, to ministers who counted on it to reward a property-owning democ- racy, to brokers and deal-makers and deco- rators and lawyers who lived by it, to lenders who have lost fortunes, and to bor- rowers who may have lost everything, including their houses. In this column five years ago, I worried about what the squeaky girl and her friends were letting us in for ('How safe are our houses?', 22 November 1986). They had all been drawn in by the lure of a market which seemed to go only one way — upwards. Immediately, that was a self-ful- filling prophecy, as new lenders poured money in from every side, and staid old bodies like the Prudential fell over their feet to buy house agents. They all had to try harder, which meant cutting margins, including the margins of safety. 'There is evidence' (I wrote) 'of lending against inflated values, with minimal checks, and below the cost of wholesale money in the City's markets.'

It could not, I thought, be as easy as all that. Credit would be tightened up; lenders would burn their fingers and drop out; there would be new competition for sav- ings; even the house-buyers' tax-breaks might not be sacrosanct. If this were any other market, from government stocks to fish-meal futures, you could see that a cor- rection was coming. This, though, was the house market, where prices had gone up, year in, year out, for a quarter of a century. Was it immune to the law of gravity? I did not think so. , 'A surveyor's report on the house market now would' (so I said) 'give it full marks for paint and polish — it has, after all, been done up for sale — but warn that the foun- dations show signs of subsidence. It may, as such houses can do, simply settle down comfortably, a little out of shape. At the

other extreme, subsidence here may set off strain there and produce a sequence of stresses to bring the whole building down. Deteriorating quality, thinning margins, a rise in had debts and repossessions, extend- ed commitments taking their toll, London prices coming back into proportion with the rest of the country, new lenders learning their lesson and pulling out, a mortgage famine to follow the mortgage glut, credit in general less lax, and a shift in public poli- cy to reward other kinds of investment and ownership — if all these curie in succes- .sion, they would crack the market, and could bring on a major financial and social crisis.'

They have all come in succession. The house market bubbled on for another 18 months, and when the Chancellor, Nigel Lawson, in his 1988 budget took two of its tax-breaks away, buyers rushed to get hous- es and mortgages before the bar came down. After that, gravity took over. Prices levelled out, began to fall and have carried on down.

A market which, having gone to a peak, then slips back by 15 or 20 per cent is only behaving as markets do. Stock markets can do it in a week. The house market has done that — and the Prudential has lost £300 million on its house agents. Royal Insur- ance will lose £400 million on insuring mortgages, and what the mortgage lenders will lose cannot yet be counted, though the Building Societies Commission is busily promoting shotgun mergers. As for the bor- rowers, about 100,000 of them will lose their houses this year.

Even that is not the whole story. The average first-time buyer, at the top of the market, was borrowing nine-tenths of the price of his house. He was like a man buy- ing shares on margin in a blazing market — the slightest fall will wipe him out, but he does not believe in a fall. In the three years from 1987 to 1989 there were one and a half million first-time buyers. If they had to sell their houses now, they could expect to be left with no money, or less than none. Those who can, keep up the payments, those who cannot, post back the keys.

Buying on margin made the house boom go. Buyers enjoyed tax relief on some of their borrowing and tax exemption on all of their gains, but what gave them such a rewarding investment was that they were playing with borrowed money. As they climbed up the housing ladder, they bor- rowed more. Some could borrow 120 per cent of the price of a house, still expecting a profit as prices rose. The cost of borrowing money, if it stays high enough for long enough, will kill such a market stone dead. So it did.

The numbers tell the story. (Professor Tim Congdon has been working them out.) London house prices rose between 1980 and 1988 at a compound interest rate of 14.3 per cent a year. That was well above the rate of interest on home loans, even before tax relief. East Anglian house prices fell, in less than two years from their peak in 1989 by 21.5 per cent. That wiped out anyone who had bought at the peak on an 80 per cent mortgage, and his mortgage interest payments were so much extra money down the drain.

House markets have broken before — but with different losers. House prices doubled in the early 1970s, until the bubble burst, but the mid-1970s were a time of high inflation. House prices stayed put while the cost of foods and services went up. The effect of inflation was to lighten the burden of debt on the house-buyer. The losers were the mugs who had lent him the money.

Will cheaper money bring the market to life again? It has been tried over the past year, apparently without effect — though its effect may have been to avert systemic col- lapse. It could be tried again; in real terms (that is, allowing for inflation) interest rates are still high, and have been rising. Borrow- ers and lenders have been deeply shocked, and neither side is minded to run risks now. They have to put their houses in order. Wishful thinking still maintains that house prices will come soaring back to everyone's rescue. So many people have such fond memories of the house boom that they still expect to get rich by borrow- ing money, buying a house and sleeping in it. Put like that, it sounds improbable — a tall story from a credulous market, like black tulips, or Polly Peck. In markets, such fallen favourites do not come back. The house party is over.