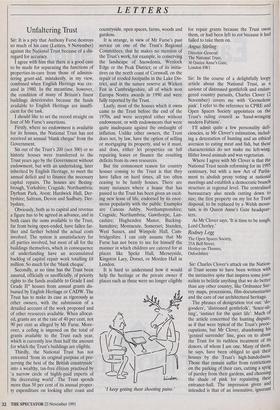 Sir: It is a pity that Anthony Furse destroys so much of his case (Letters, 9 November) against the National Trust because of a dis- regard for accuracy.

I agree with him that there is a good case to be made for separating the functions of properties-in-care from those of adminis- tering grant-aid, mistakenly, in my view, combined when English Heritage was cre- ated in 1980. In the m,eantime, however, the condition of many of Britain's finest buildings deteriorates because the funds available to English Heritage are insuffi- cient for the task.

I should like to set the record straight on four of Mr Furse's assertions.

Firstly, where no endowment is available for its houses, the National Trust has not received an annual 'blank cheque' from the Government.

Six out of the Trust's 200 (not 300) or so historic houses were transferred to the Trust years ago by the Government without endowment, but with an undertaking, later inherited by English Heritage, to meet the annual deficit and to finance the necessary capital repairs. The houses are Bening- brough, Yorkshire; Cragside, Northumbria; Dyrham Park, Avon; Hardwick Hall, Der- byshire; Saltram, Devon and Sudbury, Der- byshire.

Obviously, both as to capital and revenue a figure has to be agreed in advance, and in both cases the sums available to the Trust, far from being open-ended, have fallen far- ther and farther behind the actual costs involved. The system is unsatisfactory for all parties involved, but most of all for the buildings themselves, which in consequence of underfunding have an accumulated backlog of capital repair work totalling £8 million. So much for the 'blank cheque'.

Secondly, at no time has the Trust been assured, officially or unofficially, of priority rights to the funds available to Grade I and Grade II* houses from annual grants dis- bursed by English Heritage or CADW. The Trust has to make its case as rigorously as other owners, with the submission of a detailed account of the work proposed and of other resources available. When allocat- ed, grants are at the rate of 40 per cent, not 90 per cent as alleged by Mr Furse. More- over, a ceiling is imposed on the total of grants available to the Trust each year, which is currently less than half the amount for which the Trust's buildings are eligible.

Thirdly, the National Trust has not retreated 'from its original purpose of pre- serving the best of the British countryside' into a wealthy, tax-free elitism practised by 'a narrow circle of highly-paid experts of the decorating world'. The Trust spends more than 50 per cent of its annual proper- ty expenditure on looking after coast and countryside, open spaces, farms, woods and gardens.

It is strange, in view of Mr Furse's past service on one of the Trust's Regional Committees, that he makes no mention of the Trust's work, for example, in conserving the landscape of Snowdonia, Wenlock Edge or the Peak District; or of its initia- tives on the north coast of Cornwall, on the repair of eroded footpaths in the Lake Dis- trict, and in the nature reserve at Wicken Fen in Cambridgeshire, all of which won Europa Nostra awards in 1990 and were fully reported by the Trust.

Lastly, most of the houses which it owns came to the Trust before the end of the 1970s, and were accepted either without endowment, or with endowments that were quite inadequate against the onslaught of inflation. Unlike other owners, the Trust does not, by law, have the option of selling or mortgaging its property, and so it must, and does, either let properties on full repairing leases or finance the resulting deficits from its own resources.

But the commonest reason for country houses coming to the Trust is that they have fallen on hard times, all too often ceasing to be family houses. There are many instances where a house that has passed to the Trust has been given an excit- ing new lease of life, endorsed by its enor- mous popularity with the public. Examples are Canons Ashby, Northamptonshire; Cragside, Northumbria; Gawthorpe, Lan- cashire; Hughenden Manor, Bucking- hamshire; Montacute, Somerset; Standen, West Sussex, and Wimpole Hall, Cam- bridgeshire. I can only assume that Mr Furse has not been to see for himself the manner in which children are catered for at places like Speke Hall, Merseyside, Kingston Lacy, Dorset, or Morden Hall in London.

It is hard to understand how it would help the heritage or the private owner if places such as these were no longer eligible 'I keep getting these shooting pains.' for repair grants because the Trust owns them, or had been left to rot because it had

failed to take them on.