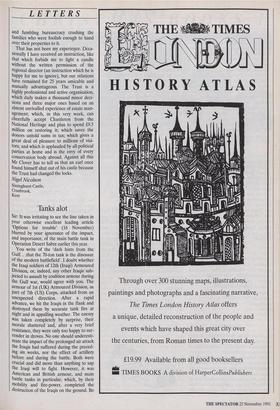 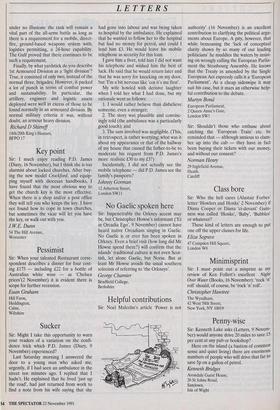 Sir: It was irritating to see the line taken in Your otherwise excellent leading article 'Options for trouble' (16 November) blurred by your ignorance of the impact, and importance, of the main battle tank in Operation Desert Sabre earlier this year.

You write of the 'dark hints from the Gulf. . that the 70-ton tank is the dinosaur of the modern battlefield'. I doubt whether the Iraqi soldiers of 12th (Iraqi) Armoured Division, or, indeed, any other Iraqis sub- jected to assault by coalition armour during the Gulf war, would agree with you. The armour of 1st (UK) Armoured Division, as part of 7th (US) Corps, attacked from an unexpected direction. After a rapid advance, we hit the Iraqis in the flank and destroyed them by accurate tank fire at night and in appalling weather. The enemy was taken completely by surprise, their morale shattered and, after a very brief resistance, they were only too happy to sur- render in droves. No one should underesti- mate the impact of the prolonged air attack the Iraqis had suffered during the preced- ing six weeks, nor the effect of artillery before and during the battle. Both were crucial and did more than anything to sap the Iraqi will to fight. However, it was American and British armour, and main battle tanks in particular, which, by their mobility and fire-power, completed the destruction of the Iraqis on the ground. Be

under no illusions: the tank will remain a vital part of the all-arms battle as long as there is a requirement for a mobile, direct- fire, ground-based weapons system with, logistics permitting, a 24-hour capability. The Gulf proved that there continues to be such a requirement.

Finally, by what yardstick do you describe 1st Armoured Division as a 'light division'? True, it consisted of only two, instead of the normal three, brigades. However, it packed a lot of punch in terms of combat power and sustainability. In particular, the artillery, engineer and logistic assets deployed were well in excess of those to be found normally in an armoured division. By normal military criteria it was, without doubt, an armour heavy division.