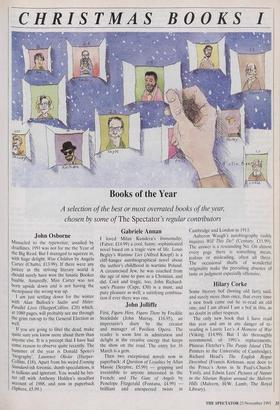 Books of the Year

A selection of the best or most overrated books of the year, chosen by some of The Spectator's regular contributors

Manacled to the typewriter, assailed by deadlines, 1991 was not for me the Year of the Big Read. But I managed to squeeze in, With huge delight, Wise Children by Angela Carter (Chatto, £13.99). If there were any Justice in the striving literary world it Should surely have won the lunatic Booker bauble. Assuredly, Miss Carter was not born upside down and is not having the menopause the wrong way up.

I am just settling down for the winter With Alan Bullock's Stalin and Hitler: Parallel Lives (HarperCollins, £20) which, at 1080 pages, will probably see me through the grim run-up to the General Election as well.

If you are going to libel the dead, make quite sure you know more about them than anyone else. It is a precept that I have had some reason to observe quite recently. The bummer of the year is Donald Spoto's biography', Laurence Olivier (Harper- Collins, £18). Apart from his weird Evening Standard-ish forensic, dumb speculations, it is tedious and ignorant. You would be bet- ter off with Anthony Holden's steadfast account of 1988, and now in paperback (Sphere, £5.99.)