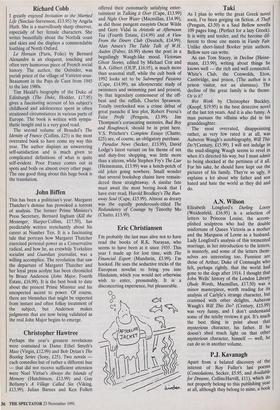 Perhaps the year's greatest revelations were contained in Dame Ethel Smyth's Mass (Virgin, £12.99) and Bob Dylan's The Bootleg Series (Sony, £25). Two novels — each comedies but of rather a different hue — that did not receive sufficient attention were Noel Virtue's Always the Islands of Memory (Hutchinson, £13.99) and Guy Bellamy's A Village Called Sin (Viking, £13.99). Julian Barnes and Ken Follett offered their customarily satisfying enter- tainment in Talking it Over (Cape, £13.99) and Night Over Water (Macmillan, /14.99), as did those pungent essayists Oscar Wilde and Gore Vidal in Aristotle at Afternoon Tea (Fourth Estate, £14.99) and A View From the Diners Club (Deutsch, £14.99). Alan Ansen's The Table Talk of W.H. Auden (Faber, £6.99) shows the poet in a beguilingly Waugh-like mood. Victorian Ghost Stories, edited by Michael Cox and R.A. Gilbert (OUP, /16.95), is much more than seasonal stuff, while the cult book of 1992 looks set to be Submerged Passions (Cape, £14.99), an idiosyncratic study of swimmers and swimming past and present, by that legendary connoisseur of the off- beat and the raffish, Charles Sprawson. Totally overlooked was a crime debut of great panache if less plot, Robert Fversz's False Profit (Penguin, £3.99). Jim Thompson's coruscating memoirs, Bad Boy and Roughneck, should be in print here. V.S. Pritchett's Complete Essays (Chatto, £25) are, of course, an obligatory purchase.

Paradise News (Seeker, £13.99), David Lodge's latest variant on his theme of sex and duty-free shopping, was little more than a sitcom, while Stephen Fry's The Liar (Heinemann, £13.99) was a hotch-potch of old jokes going nowhere. Small wonder that several bookshop chains have remain- dered these straightaway. A similar fate must await the most boring book that I have ever read, Harold Brodkey's The Run- away Soul (Cape, £15.99). Almost as dreary was the equally ponderously-titled The Redundancy of Courage by Timothy Mo (Chatto, £13.99).