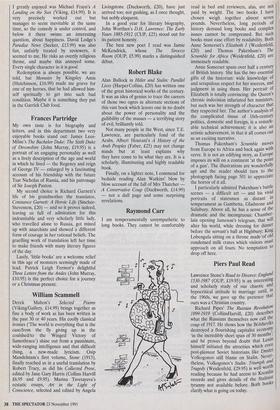 Lawrence Stone's Road to Divorce: England 1530-1987 (OUP, £19.95) is an interesting and scholarly study of our chaotic and hypocritical attitude to marriage until, In the 1960s, we gave up the pretence that ours was a Christian country. Richard Pipes' The Russian Revolution 1899-1919 (CollinsHarvill, £20) describes what the Russians themselves now call the coup of 1917. He shows how the Bolsheviks destroyed a flourishing capitalist economy 'in the incredibly short span of 30 months. ; and he proves beyond doubt that Lenin himself initiated the atrocities which ever! post-glasnost Soviet historians like Dmitri Volkogonov still blame on Stalin. Never- theless, Volkogonov's Stalin: Triumph and Tragedy (Weidenfeld, £29.95) is well worth reading because he had access to ICrelnIr records and gives details of the Stalinist tyranny not available before. Both books clarify what is going on today.