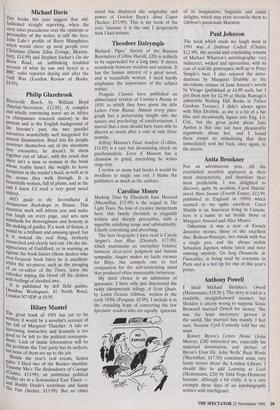 Richard Pipes' history of the Russian Revolution (Collins Harvill, £20) is unlikely to be superseded for a long time. It moves seamlessly between incident and analysis. It has the human interest of a great novel, and is beautifully written. I need hardly emphasise the importance of the subject matter.

Penguin Classics have published an abbreviated version of Custine's Russia in 1839, to which they have given the title Letters From Russia. Almost every para- graph has a penetrating insight into the nature and psychology of totalitarianism: I marvel that a man should have been able to discern so much after a visit of only three months.

Jeffrey Masson's Final Analysis (Collins, £14.95) is a racy but devastating attack on psychoanalysis. Even if Masson has a chainsaw to grind, everything he writes rings true.

I review so many bad books it would be invidious to single one out. I blame the publishers as much as the authors.