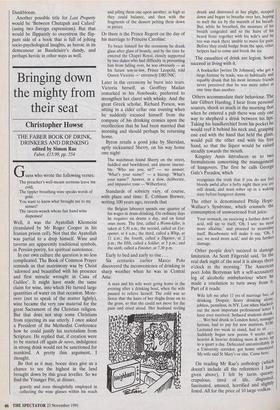 Bringing down the mighty from their seat

You want to know what brought me to my senses?

Well, it was the Ayatollah Khomeini (translated by Mr Roger Cooper in his Iranian prison cell). Not that the Ayatollah was partial to a drop himself. Wine and taverns are apparently traditional symbols, in Persian poetry, for spiritual sustenance.

In our own culture the question is no less complicated. The Book of Common Prayer reminds us that matrimony was by Christ 'adorned and beautified with his presence and first miracle wrought in Cana of Galilee'. It might have made the same claim for wine, into which He turned large quantities of water on that occasion. More- over (not to speak of the matter lightly), wine became the very raw material for the great Sacrament of the Christian religion. But that does not stop some Christians from rejecting its use utterly. I once asked a President of the Methodist Conference how he could justify his teetotalism from Scripture. He replied that, if creation were to be started off again de novo, indulgence in strong drink would not be sanctioned for mankind. A pretty thin argument, I thought.

Be that as it may, booze does give us a chance to see the highest in the land brought down by this great leveller. So we find the Younger Pitt, at dinner,

gravely and even thoughtfully employed in collecting the wine glasses within his reach and piling them one upon another, as high as they could balance, and then with the fragments of the dessert pelting them down in pieces.

Or there is the Prince Regent on the day of his marriage to Princess Caroline:

To brace himself for the ceremony he drank glass after glass of brandy, and by the time he entered the Chapel Royal, closely supported by two dukes who had difficulty in preventing him from falling over, he was obviously — as his future son-in-law, Prince Leopold, told Queen Victoria —` extremely DRUNK'.

Later in the ceremony he burst into tears. Victoria herself, as Geoffrey Madan remarked in his Notebooks, preferred to strengthen her claret with whisky. And the great Greek scholar, Richard Porson, was sitting in a cider cellar one evening when he suddenly excused himself from the company of his drinking cronies upon the recollection that he had been married that morning and should perhaps be returning home.

Byron retails a good joke by Sheridan, aptly nicknamed Sherry, on his way home one night:

Standards of sobriety I.4.ry, of course, with place and time. E. Cobham Brewer, writing 100 years ago, records that

Six centuries earlier Marco Polo discovered the inconvenience of drinking in sharp weather when he was in Central Asia:

A man and his wife were going home in the evening after a drinking bout, when the wife paused to relieve herself. The cold was so fierce that the hairs of her thighs froze on to the grass, so that she could not move for the pain and cried aloud. Her husband reeling

drunk and distressed at her plight, stooped down and began to breathe over her, hoping to melt the ice by the warmth of his breath. But, while he breathed, the moisture of his breath congealed and so the hairs of his beard froze together with his wife's and he too was stuck there unable to move for pain. Before they could budge from the spot, other helpers had to come and break the ice.

The casualties of drink are legion. Some succeed in living with it.

A bookseller [writes Dr Johnson], who got a large fortune by trade, was so habitually and equably drunk that his most intimate friends never perceived that he was more sober at one time than another.

Others accommodate their behaviour. The late Gilbert Harding, I hear from personal sources, shook so much in the morning that when he entered a pub there was only one way to shepherd a drink between his lips. Taking his handkerchief from his pocket he would reef it behind his neck and, grasping one end with the hand that held the glass, would pull the other end with his free hand, so that the liquor would be raised steadily towards the mouth.

Kingsley Amis introduces us to two formulations concerning the management of hangovers. The first he calls George Gale's Paradox, which

recognises the truth that if you do not feel bloody awful after a hefty night then you are still drunk, and must sober up in a waking state before hangover dawns.

Other people don't succeed in damage

limitation. As Scott Fitgerald said, 'In the real dark night of the soul it is always three o'clock in the morning.' The American poet John Berryman left a self-accusatorY log of alcoholic misbehaviour when he made a resolution to turn away from I. Part of it reads:

out the most important professional letter I have ever received. Seduced students drunk- ... Wet bed drunk in London hotel, manager furious, had to pay for new mattress, $100. Lectured too weak to stand, had to Sit • • Suddenly began new poems 9 weeks ago, heavier & heavier drinking more & more, up to a quart a day. Defecated uncontrollably in a University corridor, got home unnoticed. My wife said St Mary's or else. Came here. Onreading Mr Rae's anthology (Which doesn't include all the references I have given above), I felt by turns queasY, crapulous, tired of life, disgusted, fascinated, amused, horrified and slightly foxed. All for the price of 10 large vodkas.