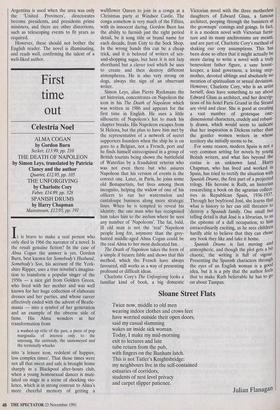 t is brave to make a real person who only died in 1966 the narrator of a novel. Is the result genuine fiction? In the case of Alma Cogan the answer is yes. Gordon Burn, best known for Somebody's Husband, Somebody's Son, his account of the York- shire Ripper, uses a true novelist's imagina- tion to transform a popular singer of the 1950s — a nice girl from Golders Green, who lived with her mother and was well known for her huge collection of elaborate dresses and her parties, and whose career effectively ended with the advent of Beatle- mania — into a symbol of her generation and an example of the obverse side of fame. His Alma wonders at her transformation from

a washed-up relic of the past, a piece of pop marginalia of interest only to the unyoung, the untrendy, the unmoneyed and the terminally whacko

into 'a leisure icon, redolent of happier, less complex times'. That those times were not all that sweet and safe is brought home sharply in a Blackpool after-hours club, when a young homosexual dancer is muti- lated on stage in a scene of shocking vio- lence, which is in strong contrast to Alma's more cheerful memory of getting a wallflower Queen to join in a conga at a Christmas party at Windsor Castle. The conga somehow is very much of the Fifties, with its innocent daring. Gordon Burn has the ability to furnish just the right period detail, be it song title or brand name for each decade, from Coty to the Sock Shop. In the wrong hands this can be a cheap trick, and it is beloved of writers of sex- and-shopping sagas, but here it is not lazy shorthand but a clever tool which he uses to create and then destroy different atmospheres. He is also very strong on dogs, always the sign of an observant writer.

Simon Leys, alias Pierre Ryckmans the art historian, concentrates on Napoleon the icon in his The Death of Napoleon which was written in 1986 and appears for the first time in English. He uses a little silhouette of Napoleon's hat to mark his chapter breaks. His Napoleon escapes from St Helena, but the plan to have him met by the representative of a network of secret supporters founders when the ship he is on goes to a Belgian, not a French, port and he finds himself unrecognised in a group of British tourists being shown the battlefield of Waterloo by a fraudulent veteran who was not even there but who assures Napoleon that his version of events is the correct one. Later, in Paris, he joins some old Bonapartists, but lives among them incognito, helping the widow of one of his officers to run her watermelon and cantaloupe business along more strategic lines. When he is tempted to reveal his identity, the one man who has recognised him takes him to the asylum where he sees any number of 'Napoleons'. The fat, bald, ill old man is not the 'real' Napoleon people long for, anymore than the grey- haired middle-aged Alma Cogan could be the real Alma to her most dedicated fan.

The Death of Napoleon takes the form of a simple if bizarre fable and shows that this method, which the French have always favoured, still works as a way of presenting profound or difficult ideas.

Charlotte Cory's The Unforgiving looks a familiar kind of book, a big domestic Victorian novel with the three motherless daughters of Edward Glass, a famous architect, peeping through the banisters at the grownups' comings and goings. In fact, it is a modern novel with Victorian furni- ture and its many anchronisms are meant, and are part of, Charlotte Cory's method of shaking our cosy assumptions. This has been done so often that it might actually be more daring to write a novel with a truly benevolent father figure, a sane house- keeper, a kind governess, a loving step- mother, devoted siblings and absolutely no mention of spiritualism or sexual deviation. However, Charlotte Cory, who is an artist herself, does have something to say about Edward Glass as architect, and her descrip- tions of his hotel Paris Grand in the Strand are vivid and clear. She is good at creating a vast number of grotesque one- dimensional characters, crudely and robust- ly drawn, which would seem to indicate that her inspiration is Dickens rather than the gentler women writers in whose territory she initially seems to be.

For some reason, modern Spain is not a very common setting for novels by young British writers, and what lies beyond the costas is an unknown land. Harry Chapman, who has lived and worked in Spain, has tried to rectify the situation with Spanish Drums, the first part of a projected trilogy. His heroine is Ruth, an historian researching a book on the agrarian collect- ives in Republican Spain, 1936-1937. Through her boyfriend Jose, she learns that what is history to her can still threaten to destroy a Spanish family. One small but telling detail is that Jose is a librarian, to us the epitome of a dull occupation, to him extraordinarily exciting, as he sees children hardly able to believe that they can chose any book they like and take it home. Spanish Drums is fast moving and atmospheric, and though the plot gets a hit chaotic, the writing is full of vigour. Presenting the Spanish characters through the eyes of an English woman is a good idea, but it is a pity that the author feels that to make Ruth believable he has to go on about Tampax.