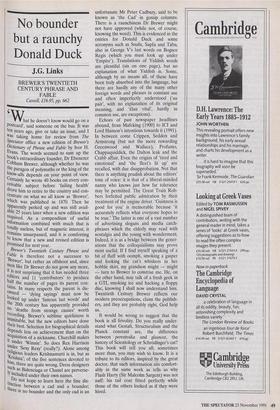 No bounder but a raunchy Donald Duck

at he doesn't know would go on a

Wh postcard', said someone on the bus. It was ten years ago, give or take an issue, and I was taking home for review from The Spectator office a new edition of Brewer's Dictionary of Phrase and Fable by Ivor H. Evans. The words seemed to sum up the book's extraordinary founder, Dr Ebenezer Cobham Brewer, although whether he was the paragon of polymaths or the king of the know-alls depends on your point of view. Certainly he wrote 40 books on every con- ceivable subject before 'failing health' drove him to retire to the country and con- centrate on what we all know as 'Brewer', Which was published in 1870. Then he 4Pparently perked up and was still avail- able 25 years later when a new edition was r.ecluired. As a compendium of useful Information combined with much that is totally useless, but of magnetic interest, it remains unsurpassed, and it is comforting to know that a new and revised edition is Promised for next year. Brewer's Twentieth Century Phrase and .fable is therefore not a successor to Rrewer', but rather an offshoot and, since !hen like Dr Brewer do not grow any more, It is not surprising that it has needed three editors and 11 'contributors' to produce half the number of pages its parent con- t4Ills. In many respects the parent is dis- owned — 'dying sayings' must now be looked up under 'famous last words' and the 20th century has apparently provided Ito 'deaths from strange causes' worth r.e.cording. Brewer's sublime quirkiness is Illimitable, but the new editors have done their best. Selection for biographical details dePends less on achievement than on the "cquisition of a nickname. Churchill makes It under Winnie'. So does Rex Harrison under 'Sexy Rexy' (really?). Alone among leligious leaders Krishnamurti is in, but as hiCr, ishna'; of the five sentences devoted to "Irll, three are quite wrong. Dress designers Ileh as Balenciaga or Chanel are perverse- IY included under their own names. ,, Do not hope to learn here the fine dis- !Inchon between a cad and a bounder; 'litre is no bounder and the only cad is an

unfortunate Mr Peter Cadbury, said to be known as 'the Cad' in gossip columns. There is a raunchiness Dr Brewer might not have approved (while not, of course, knowing the word). This is evidenced in the entries for Donald Duck and some acronyms such as Snafu, Sapfu and Tabu, also in George V's last words on Bognor Regis (which you must look up under 'Empire'). Translations of Yiddish words are plentiful (six on one page), but no explanation of what Yiddish is. Some, although by no means all, of these have been truly absorbed into the language, but there are hardly any of the many other foreign words and phrases in constant use and often imperfectly understood ('au pair', with no explanation of its original meaning, and 'élan vital', hardly in common use, are exceptions).

Echoes of past newspaper headlines abound, from Mafeking (1900) to ICI and Lord Hanson's intentions towards it (1991). In between come Crippen, Seddon and Armstrong (but not the more rewarding Greenwood and Wallace), Profumo, Chappaquiddick, the Dalton leak and the Crabb affair. Even the origins of 'tired and emotional' and 'the fleet's lit up' are recalled, with due disapprobation. Not that there is anything prudish about the editors' tone of voice: it is that of a liberal-minded nanny who knows just how far tolerance may be permitted. The Great Train Rob- bers forfeited public admiration by their treatment of the engine driver. 'Guinness is good for you' is memorable because 'it accurately reflects what everyone hopes to be true.' The latter is one of a vast number of advertising slogans and media catch- phrases which the elderly may read with nostalgia and the young with wonderment. Indeed, it is as a bridge between the gener- ations that the colloquialisms may prove most useful. III find myself speaking of a bit of fluff with oomph, smoking a gasper and looking the cat's whiskers in her hobble skirt, my grandson might — might — turn to Brewer to construe me. He, on the other hand, may talk of a fresh geek in a GTI, smoking ice and hacking a floppy disc, knowing I shall now understand him. Twentieth Century Brewer reflects our modern preoccupations, claim the publish- ers, and they are probably right, God help us.

It would be wrong to suggest that the book is all frivolity. Do you really under- stand what Gestalt, Structuralism and the Planck constant are, the difference between perestroika and glasnost, the history of Scientology or SchrOdinger's cat? This book will tell you all, sometimes more than, you may wish to know. It is a tribute to its editors, inspired by the great doctor, that such information sits comfort- ably in the same work as tells us why Flash Harry (Sir Malcolm Sargent) was not naff: his tail coat fitted perfectly while those of the others looked as if they were hired.