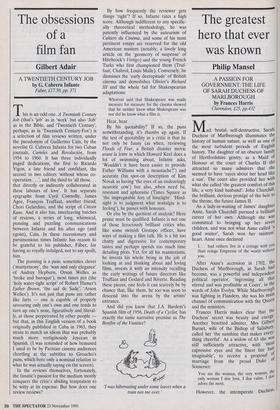 The obsessions of a film fan

A TWENTIETH CENTURY JOB by G. Cabrera Infante Faber, L17.50, pp. 371 This is an odd one. A Twentieth Century Job (that's 'job' as in 'work' but also 'Job' as in the Bible, and 'Twentieth Century', perhaps, as in 'Twentieth Century-Fox') is a selection of film reviews written, under the pseudonym of Guillermo Cain, by the novelist G. Cabrera Infante for two Cuban journals, Carteles and Revolucion, from 1954 to 1960. It has three individually paged dedications, the first to Ricardo Vigon, a late friend and confidant, the second to two editors 'without whose co- operation ...', and the third to 'all those. . . that directly or indirectly collaborated in these labours of love'. It has separate epigraphs from Cyril Connolly, James Agee, Francois Truffaut, another friend, Chori Gelardino, and the script of Citizen Kane. And it also has, interleaving batches of reviews, a series of long, whimsical, punning and puzzling communications between Infante and his alter ego (and egoist), Cain. In these recessionary and parsimonious times Infante has reason to be grateful to his publisher, Faber, for having so royally indulged, not to say spoilt, him.

The punning is a pain: sometintes clever ('martyrmony', the 'wan and only elegance' of Audrey Hepburn, Orson Welles as 'broke and baroque'), most times pot (the 'holy water-tight script' of Robert Hamer's Father Brown, 'the sad de Sade', 'Arson Welles). It's not just that puns are rather like farts — one is capable of properly savouring only one's own and one tends to turn up one's nose, figuratively and,literal- ly, at those perpetrated by other people — but that, in this English version of a book originally published in Cuba in 1963, they strain to match an idiom that was probably much more vertiginously Joycean in Spanish. (I was reminded of how bemused I used to be by Parisian cinema audiences chortling at the subtitles to Groucho's puns, which bore only a nominal relation to what he was actually saying on the screen).

In the reviews themselves, fortunately, the fanatic's passion for the medium mostly conquers the critic's abiding temptation to be witty at its expense. But how does one review reviews?

By how frequently the reviewer gets things 'right'? If so, Infante rates a high score. Although indifferent to any specific- ally theoretical methodology, he was patently influenced by the auteurism of Cahiers du Cinema, and some of his most pertinent essays are reserved for the old American masters (notably, a lovely long article on the 'geometry of suspense' of Hitchcock's Vertigo) and the young French Turks who first championed them (Truf- faut, Chabrol, Louis Ma11e). Conversely, he dismisses the 'early decrepitude' of British cinema and demolishes Olivier's Richard III and the whole fad for Shakespearian adaptations:

By his quotability? If so, the puns notwithstanding, it's thumbs up again. If the test of quotability in a critic is that he not only be funny (as when, reviewing Floods of Fear, a British disaster movie avant la lettre in which Howard Keel does a lot of swimming about, Infante asks, 'Wouldn't it have been easier to provide Esther Williams with a moustache?') and accurate (his spot-on description of Kim Novak as having 'the eyes of an endearingly neurotic cow') but also, when need be, resonant and aphoristic (Times Square as 'the impregnable fort of limelight'. 'Hind- sight is to judgment what nostalgia is to feeling'), he passes with honours.

Or else by the quotient of analysis? Here praise must be qualified. Infante is not one of those ferociously brilliant critics who, like some swinish Gestapo officer, have ways of making a film talk. He is a bit too chatty and digressive for contemporary tastes and perhaps spends too much time detailing plots. Yet, for all his mannerisms, he invests his whole being in the job of looking at and thinking about and loving films, invests it with an intensity recalling the early writings of future directors like Truffaut and Godard and Rivette. Reading these pieces, one feels it can scarcely be by chance that, like them, he too was soon to descend into the arena by the artists' entrance.

And did you know that J.A. Bardem's Spanish film of 1956, Death of a Cyclist, has exactly the same narrative premise as The Bonfire of the Vanities?

'I was hibernating under some leaves when a train ran me over.'