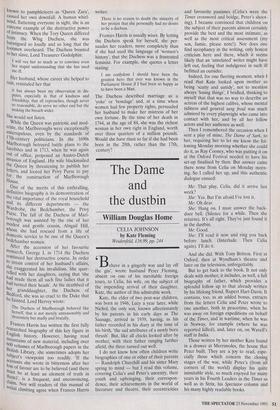 The Dame and the dustbin

CELIA JOHNSON by Kate Fleming Weidenfeld, £16.99, pp. 244 Behave in a gingerly way and lay off the gin', wrote husband Peter .Fleming, absent on one of his inevitable foreign tours, to Celia, his wife, on the subject of the impending arrival of their daughter, Kate, the author of this admirable work.

Kate, the elder of two post-war children, was born in 1946, Lucy a year later, while Nichol, the only son, known affectionately by his parents in his early days as The Sausage, arrived in 1939, having, as his father recorded in his diary at the time of his birth, 'the sad attributes of a newly born thrush'. But, like all chicks looked after by mother, with their father ranging further afield, the three turned out well.

I do not know how often children write biographies of one or other of their parents — Randolph Churchill and his sister Mary spring to mind — but I read this volume, covering Celia's and Peter's ancestry, their youth and upbringing, their correspon- dence, their achievements in the world of literature and theatre, their eccentricities and favourite pastimes (Celia's were the Times crossword and bridge, Peter's shoot- ing), I became convinced that children on the subject of their parents almost certainly provide the best and the most intimate, as well as the most critical assessment (my son, Jamie, please note!). Nor does one find sycophancy in the writing, only honest criticism here and there, which it seems likely that an 'unrelated' writer might have left out, feeling that indulgence in such ill befitted an outsider.

Indeed, for one fleeting moment, when I read that Kate looked upon mother as being `scatty and untidy', not to mention always 'losing things', I bridled, thinking to myself that that was no way to describe an actress of the highest calibre, whose mental tidiness and general sang froid was much admired by every playwright who came into contact with her, and by all her fellow actors and her audience as well.

Then I remembered the occasion when I sent a play of mine, The Dame of Sark, to her, requiring her to let me know the fol- lowing Monday morning whether she could do it, as Ray Cooney, who was putting it on at the Oxford Festival needed to have his set-up finalised by then. But answer came there none from Celia on Monday morn- ing. So I called her up, and this authentic dialogue ensued: Me: That play, Celia, did it arrive last week?

She: Hang on. I must answer the back- door bell. (Silence for a while. Then she returns). It's all right. They've just found it in the dustbin.

She: I'll read it now and ring you back before lunch. (Interlude. Then Celia again). I'll do it.

And she did. With Tony Britton. First at Oxford, then at Wyndham's theatre and later on the television, unforgettably.

But to get back to the book. It not only deals with mother; it includes, as well, a full biography of father, which provides a splendid follow up to that already written by his lifelong friend, Rupert Hart-Davis. It contains, too, as an added bonus, extracts from the letters Celia and Peter wrote to one another, both in peacetime, when he was away on foreign expeditions on behalf of the Times, and in wartime, when he was in Norway, for example (where he was reported killed), and, later on, on Wavell's staff in India.

Those written by her mother Kate found in a drawer at Merrimoles, the house that Peter built. They are a joy to read, espe- cially those which concern the closing stages of the war, while Peter's (from all corners of the world) display his quite inimitable style, so much enjoyed for many years in his Fourth Leaders in the Times as well as in Strix, his Spectator column and his many highly readable books.