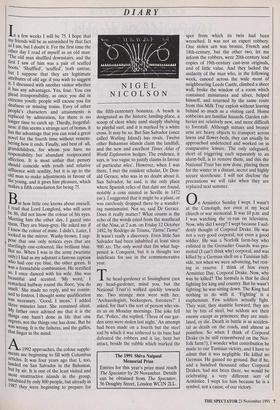 NIGEL NICOLSON In a few weeks I will be 75, I hope that mY friends will be as astonished by that fact as I am, but I doubt it. For the first time the Other day I read of myself as an old man: The old man shuffled downstairs, and the first I saw of him was a pair of scuffed boots."Shuffled', 'scuffed', both untrue, but I suppose that they are legitimate attributes of old age if you wish to suggest it. I discussed with another visitor whether it has any advantages. Yes, four. You can Plead irresponsibility, as once you did in extreme youth: people will excuse you for deafness or missing trains. Envy of other people's characters and attainments is replaced by admiration, for there is no longer time to catch up. Thirdly, forgetful- ness: if this seems a strange sort of bonus, it has the advantage that you can read a great novel for the fourth time without remem- bering how it ends. Finally, and best of all, grandchildren, for whom you have no responsibility but abundant reciprocated affection. It is most unfair that penury Should coincide with youth and relative affluence with senility, but it is up to the Old man to make adjustments in favour of the young, and it gives him pleasure, which makes a fifth consolation for being 75.

Blut how little one knows about oneself. I read that Lord Longford, who will soon be 86, did not know the colour of his eyes. Meeting him the other day, I gazed into them. They are bluey-grey. He asked me if I knew the colour of mine. I didn't. Later, I looked in the mirror. Washy-brown. I sup- Pose that one only notices eyes that are startlingly one-coloured, like brilliant blue. But no. When I was in the army (wartime Only) I had as my adjutant a famous captain who had one eye blue, the other green. It was a formidable combination. He terrified us. I once danced with his wife. She was beautiful and scented. 'My word,' I remarked halfway round the floor, 'you do smell.' She made no reply, and we contin- ued to foxtrot. I thought some qualification was necessary. 'Good, I mean,' I added three minutes later. She remained silent. My father once advised me that it is the things one hasn't done in life that one regrets, not the things one has done. But he was wrong. It is the failures, and the gaffes, that linger in the mind.

As 1992 approaches, the colour supple- ments are beginning to fill with Columbus articles. It was four years ago that I, too, landed on San Salvador in the Bahamas, but by air. It is one of the least visited and most unattractive islands in the group, inhabited by only 800 people, but already in 1987 they were beginning to prepare for the fifth-centenary bonanza. A beach is designated as the historic landing-place, a scoop of clear white sand steeply shelving to playful surf, and it is marked by a white cross. It may be so. But San Salvador (once called Watling Island) has rivals. Twelve other Bahamian islands claim the landfall, and the new and excellent Times Atlas of World Exploration hedges. The evidence, it says, is 'too vague to justify claims in favour of particular isles'. However, when I was there, I met the resident scholar, Dr Don- ald Gerace, who was in no doubt about it, San Salvador, he said, is the only place where Spanish relics of that date are found, notably a coin minted in Seville in 1472 (sic). I suggested that it might be a plant, or was carelessly dropped there by a wander- ing numismatist. Not so, said Dr Gerace. Does it really matter? What counts is the echo of the words cried from the masthead of the Nina, at 2 a.m. on Friday 12 October 1492, by Rodrigo de Triana, 'Tierra! Tierra!' It wasn't really a discovery. Even little San Salvador had been inhabited at least since 900 AD. The only word that fits what hap- pened is Conquest, but it is thought too indelicate for use in the commemorative year.

he head-gardener at Sissinghurst (not my head-gardener, mind you, but the National Trust's) walked quickly towards me. Two strange men were with her. 'Archaeologist's, beekeepers, foresters?' I asked, for that's the sort of person who vis- its us on Monday mornings. The joke fell flat. 'Police,' she replied. 'Three of our gar- den urns were stolen last night.' An attempt had been made on a fourth but the steel rod by which it was tethered to its base had defeated the robbers and it lay, bent but intact, beside the rubble which marked the

spot from which its twin had been wrenched. It was not an expert robbery. One stolen urn was bronze, French and 18th-century, but the other two, let me inform the robbers, were 20th-century lead copies of 19th-century cast-iron originals, and of little value. And they lacked the audacity of the man who, in the following week, canoed across the wide moat of neighbouring Leeds Castle, climbed a sheer wall, broke the window of a room which contained miniatures and silver, helped himself, and returned by the same route from this Milk Tray exploit without leaving behind so much as a visiting card. Home robberies are familiar hazards. Garden rob- beries are relatively new, and more difficult to forestall. Although statues and bronze urns are heavy objects to transport across lawns and flower-beds, they can usually be approached undetected and worked on in comparative leisure. The only safeguard, short of triggering each separately to an alarm-bell, is to remove them, and this the National Trust has now done, placing them for the winter in a distant, secret and highly secure storehouse. I will not disclose the precautions we will take when they are replaced next summer.

On Armistice Sunday I wept. I wasn't at the Cenotaph, nor even at my local church or war memorial. It was 10 p.m. and I was watching the re-run on television. Now, why. did I weep? I wept because I sud- denly thought of Corporal Drake. He was not a very good corporal, not even a good soldier. He was a Norfolk farm-boy who enlisted in the Grenadier Guards, was pro- moted (I can't think why) corporal, and was killed by a German shell on a Tunisian hill- side, not when we were advancing, but rest- ing in reserve. I think of him every Armistice Day. Corporal Drake. Now, why was he killed? The formula is that he died fighting for king and country. But he wasn't fighting: he was sitting down. The King had nothing to do with it. 'Fighting' is a euphemism. Few soldiers actually fight. They wait; they stumble forward; they are hit by bits of steel, but seldom see their enemy except as prisoners; they are muti- lated, or die. Death in battle is as acciden- tal as death on the roads, and almost as pointless. So when I think of Corporal Drake (is he still remembered on the Nor- folk farm?), I wonder what contribution he made to our Tunisian victory, and I have to admit that it was negligible. He killed no German. He gained no ground. But if he, and a hundred thousand other Corporal Drakes, had not been there, we would be celebrating a very different sort of Armistice. I wept for him because he is a symbol, not a cause, of our victory.