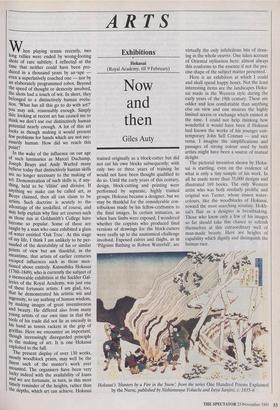 When playing tennis recently, two long rallies were ended by wrong-footing Shots of rare subtlety. I reflected at the time that neither could have been pro- duced in a thousand years by an .ape even a superlatively coached one — nor by an elaborately programmed robot. Beyond the speed of thought or dexterity involved, the shots had a touch of wit. In short, they belonged to a distinctively human evolu- tion, 'What has all this go to do with art?' You may ask, reasonably enough. Simply this: looking at recent art has caused me to think we don't use our distinctively human Potential nearly enough. A lot of this art looks as though making it would present few problems for hands which are not nec- essarily human. How did we reach this Point?

In the wake of the influence on our age of such luminaries as Marcel Duchamp, Joseph Beuys and Andy Warhol many believe today that distinctively human skills are no longer necessary to the making of art. Demonstration of such skills is, if any- thing, held to be 'elitist' and divisive. If anything we make can be called art, as Beuys claimed, then all can claim to be artists. Such doctrine is acutely to the advantage of the unskilled, of course, and may help explain why fine art courses such as those run at Goldsmith's College have become so popular. Some of these are taught by a man who once exhibited a glass of water entitled 'Oak Tree'. At this stage of my life, I think I am unlikely to be per- suaded of the desirability of his or similar Points of view but am thankful, in the meantime, that artists of earlier centuries escaped influences such as those men- tioned above entirely. Katsushika Hokusai (1760-1849), who is currently the subject of a memorable exhibition at the Sackler Gal- leries of the Royal Academy, was just one of these fortunate artists. I am glad, too, that he demonstrated his artistic wit and ingenuity, to say nothing of human wisdom, by making images of great inventiveness and beauty. He differed also from many Young artists of our own time in that the tools of his trade did not lie as uneasily in his hand as tennis rackets in the grip of gorillas. Here we encounter an important, though increasingly disregarded principle in the making of art. It is one Hokusai exploited to the full.

The present display of over 130 works, mostly woodblock prints, may well be the finest such of the master's work ever mounted. The organisers have been very lucky indeed with the availability of loans and we are fortunate, in turn, in this most timely reminder of the heights, rather than the depths, which art can achieve. Hokusai

trained originally as a block-cutter but did not cut his own blocks subsequently; with only two or three years of training he would not have been thought qualified to do so. Until the early years of this century, design, block-cutting and printing were performed by separate, highly trained groups. Hokusai became a designer, but we may be thankful for the considerable con- tributions made by his fellow-craftsmen to the final images. In certain instances, as when bare limbs were exposed, I wondered whether the copyists who produced final versions of drawings for the block-cutters were really up to the anatomical challenge involved. Exposed calves and thighs, as in 'Pilgrims Bathing in Roben Waterfall', are virtually the only infelicitous bits of draw- ing in the whole oeuvre. One takes account of Oriental stylisation here: almost always this conforms to the essence if not the pre- cise shape of the subject matter presented.

Here is an exhibition at which I could and shall spend happy hours. Not the least interesting items are the landscapes Hoku- sai made in the Western style during the early years of the 19th century. These are odder and less comfortable than anything else on view and one mourns the highly limited access or exchange which existed at the time. I could not help thinking how wonderful it would have been if Hokusai had known the works of his younger con- temporary John Sell Cotman — and vice versa. I imagine the simplifications and passages of strong colour used by both artists might have been a source of mutual delight.

The pictorial invention shown by Hoku- sai is startling, even on the evidence of what is only a tiny sample of his work. In all he made more than 35,000 designs and illustrated 169 books. The only Western artist who was both similarly prolific and original was Turner, whose tiniest water- colours, like the woodblocks of Hokusai, reward the most searching scrutiny. Holch- sai's flair as a designer is breathtaking. Those who know only a few of his images so far should take this chance to refresh themselves at this extraordinary well of man-made beauty. Here are heights of capability which dignify and distinguish the human race.