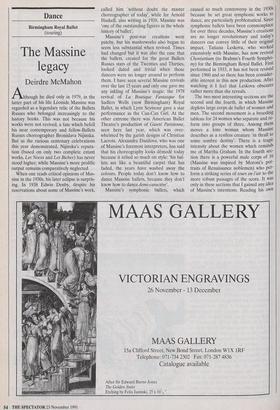 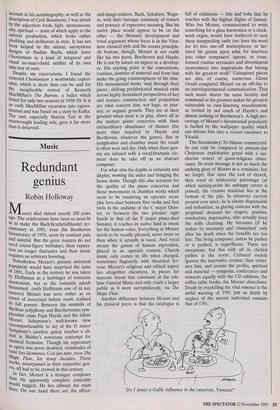 Athough he died only in 1979, in the latter part of his life Leonide Massine was regarded as a legendary relic of the Ballets Russes who belonged increasingly to the history books. This was not because his works were not revived, a fate which befell his near contemporary and fellow-Ballets Russes choreographer Bronislava Nijinska. But as the various centenary celebrations this year demonstrated, Nijinska's reputa- tion (based on only two complete extant works, Les Noces and Les Biches) has never stood higher, while Massine's more prolific output remains comparatively neglected.

When one reads critical opinions of Mas- sine in the 1930s, his later eclipse is surpris- ing. In 1938 Edwin Denby, despite his reservations about some of Massine's work, called him 'without doubt the master choreographer of today', while for Arnold Haskell, also writing in 1938, Massine was 'one of the outstanding figures in the whole history of ballet'.

Massine's post-war creations were patchy, but his masterworks also began to seem less substantial when revived. Times had changed but it was also the case that the ballets, created for the great Ballets Russes stars of the Twenties and Thirties, looked dated and trivial when those dancers were no longer around to perform them. I have seen several Massine revivals over the last 15 years and only one gave me any inkling of Massine's magic: the 1978 revival of La Boutique Fantasque for Sadlers Wells (now Birmingham) Royal Ballet, in which Lynn Seymour gave a star performance as the Can-Can Girl. At the other extreme there was American Ballet Theatre's production of Gaiete Parisienne, seen here last year, which was over- whelmed by the garish designs of Christian Lacroix. Alexandra Danilova, who was one of Massine's foremost interpreters, has said that his choreography looks &mode today because it relied so much on style: 'his bal- lets are like a beautiful carpet that has faded, the years have washed away the colours. People today don't know how to dance Massine ballets, because they don't know how to dance demi-caractere'.

caused so much controversy in the 1930s because he set great symphonic works to dance, are particularly problematical. Since symphonic ballets have been commonplace for over three decades, Massine's creations are no longer revolutionary and today's dancers can convey little of their original impact. Tatiana Leskova, who worked extensively with Massine, has now revived Choreartium (to Brahms's Fourth Sympho- ny) for the Birmingham Royal Ballet. First performed in 1933, it has not been revived since 1960 and so there has been consider- able interest in this new production. After watching it I feel that Leskova obscures rather more than she reveals.

The two most interesting sections are the second and the fourth, in which Massine deploys large corps de ballet of women and men. The second movement is a brooding tableau for 24 women who separate and re- form into groups of three. Among them moves a lone woman whom Massine describes as a restless creature 'in thrall to some sombre destiny'. There is a tragic intensity about the women which reminds me of Martha Graham. In the fourth sec- tion there is a powerful male corps of 16 (Massine was inspired by Moroni's por- traits of Renaissance noblemen) who per- form a striking series of tours en l'air to the more robust passages of the score. It was only in these sections that I gained any idea of Massine's intentions. Reading his ovin

account in his autobiography, as well as the description of Cyril Beaumont, I was struck by the adjectives fresh, light, spontaneous, airy, spiritual — none of which apply to the current production, which looks rather Plodding and deliberate in style. It has not been helped by the mimsy, anonymous designs of Nadine Baylis, which leave Choreartium in a kind of temporal and visual no-man's-land, neither of its own time nor of ours.

Despite my reservations, I found the restored Choreartiurn a worthwhile experi- ence, which is more than can be said for the inexplicable revival of Kenneth MacMillan's The Burrow, a ballet which lasted for only two seasons in 1958-59. It is an early MacMillan excursion into expres- sionism and was based on a story by Kafka. The cast, especially Marion Tait in the overwrought leading role, gave it far more than it deserved.