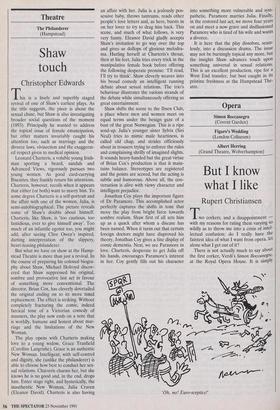 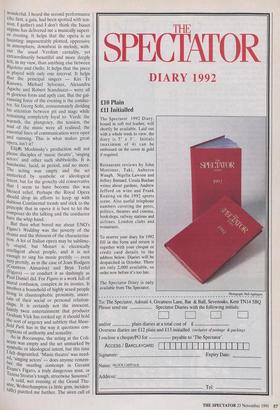 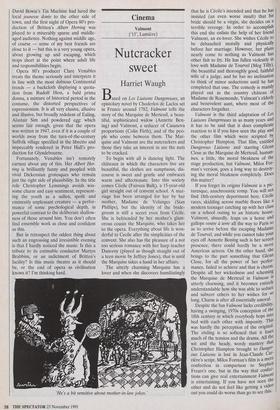 Two corkers, and a disappointment — with my reasons for rating them varying so wildly as to throw me into a crisis of intel- lectual confusion: do I really have the faintest idea of what I want from opera, let alone what I get out of it? There is not actually much to say about the first corker, Verdi's Simon Boccanegra, at the Royal Opera House. It is simply

Wonderful. I heard the second performance (the first, a gala, had been spotted with ten- sion, I gather) and I don't think the Isaacs regime has delivered me a musically superi- or evening. It helps that the opera is so haunting: impenetrably plotted, oppressive in atmosphere, downbeat in melody, with- out the usual Verdian carnality, yet extraordinarily beautiful and more deeply felt, in my view, than anything else between Rigoletto and Otello. It helps that the piece is played with only one interval. It helps that the principal singers — Kin i Te Kanawa, Michael Sylvester, Alexandru Agache and Robert Scandiuzzi— were all in glorious form and aptly cast. But the gal- vanising force of the evening is the conduc- tor, Sir Georg Solti, consummately dividing his attention between pit and stage while remaining completely loyal to Verdi: the warmth, the plangency, the tension, the soul of the music were all realised; the essential lines of communication were open and running. This is what makes great opera, isn't it?

Elijah Moshinsky's production will not Please disciples of 'music theatre', 'singing actors' and other such shibboleths. It is handsome, lucid, in period, and no more. The acting was empty and the set Unmarked by symbolic or ideological intent, but for the grouchy old conservative that I seem to have become this was blessed relief. Perhaps the Royal Opera should drop its efforts to keep up with dubious Continental trends and stick to the Principle that in opera it is best to let the composer do the talking and the conductor have the whip hand. But then what bored me about ENO's Figaro' Wedding was the poverty of the drama and the thinness of the characterisa- tion. A lot of Italian opera may be sublime- 13, stupid, but Mozart is electrically intelligent about people, and it is not enough to sing his music prettily — even very prettily, as in the case of Joan Rodgers (Countess Almaviva) and Bryn Terfel (Figaro) — or conduct it as dashingly as Paul Daniel did. For Figaro is a work full of In. oral confusion, complex in its ironies. It involves a household of highly sexed people living in claustrophobic proximity, uncer- tain of their social or personal relation-

ships. It is certainly not the innocent,

faintly twee entertainment that producer Graham Vick has cooked up: it should hold the sort of urgency and subtlety that Mans- field .Park has in the way it questions con- ceptions of authority and sexuality. As in Boccanegra, the acting at the Coli- seum was empty and the set unmarked by sYtnholic or ideological intent, but this time I felt disgruntled. 'Music theatre' was need- ed, 'singing actors' — does anyone remem- Der the snarling contempt in Geraint Figaro, a truly dangerous man, or leresa Stratas's tough, streetwise Susanna? A cold, wet evening at the Grand The- atre, Wolverhampton (a little gem, inciden-

J) puzzled me further. The siren call of David Bowie's Tin Machine had lured the local jeunesse doree to the other side of town, and the first night of Opera 80's pro- duction of Britten's Albert Herring was played to a miserably sparse and middle- aged audience. Nothing against middle age, of course — some of my best friends are close to it — but this is a very young opera, about growing up and escaping, which stops short at the point where adult life and responsibilities begin.

Opera 80's producer Clare Venables treats the theme seriously and interprets it in line with the most dubious Continental trends — a backcloth displaying a quota- tion from Rudolf Hess, a bald prima donna, a mixture of historical period in the costume, the distorted perspectives of expressionism. It is all very elusive, allusive and illusive, but broadly redolent of Ealing, Alastair Sim and powdered egg: which seems fair enough, given that the opera was written in 1947, even if it is a couple of worlds away from the turn-of-the-century Suffolk village specified in the libretto and impeccably rendered in Peter Hall's pro- duction for Glyndebourne.

Fortunately, Venables isn't remotely earnest about any of this. Her Albert Her- ring is brilliantly funny and peopled with vivid Dickensian grotesques who remain just the right side of plausibility. In the title role Christopher Lemmings avoids win- some charm and easy sentiment, represent- ing the youth as a sullen, spoilt and eminently unpleasant creature — a perfor- mance of some psychological depth, in powerful contrast to the deliberate shallow- ness of those around him. You don't often find ensemble work as close and confident as this.

But in retrospect the oddest thing about such an engrossing and irresistible evening is that I hardly noticed the music. Is this a tribute to its estimable conductor Martyn Brabbins, or an indictment of Britten's facility? Is this music theatre as it should be, or the end of opera as civilisation knows it? I'm thinking hard.