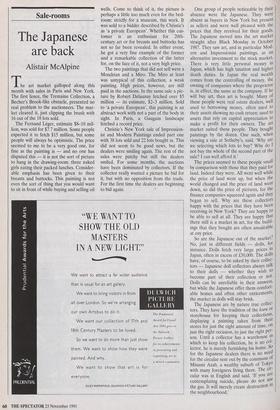 The Japanese are back

The art market galloped along this month with sales in Paris and New York. The first fence, the Tremaine Collection, a Becher's Brook-like obstacle, presented no real problem to the auctioneers. The mar- ket cleared it, just clipping the brush with 16 out of the 18 lots sold.

The Fernand Leger, estimate $8-10 mil- lion, was sold for $7.7 million. Some people expected it to fetch $15 million, but some people will always be optimistic. The price seemed to me to be a very good one, for fine as the painting is — and no one has disputed this — it is not the sort of picture to hang in the drawing-room: three naked girls eating their packed lunches. Consider- able emphasis has been given to their breasts and buttocks. This painting is not even the sort of thing that you would want to sit in front of while buying and selling oil wells. Come to think of it, the picture is perhaps a little too much even for the bed- room: strictly for a museum, this work. It was sold to a bidder described by Christie's as 'a private European'. Whether this cus- tomer is an enthusiast for 20th- century art or for breasts and buttocks has not so far been revealed. In either event, he got a very fine example of the former and a remarkable collection of the latter for, on the face of it, not a very high price.

The two paintings that did not sell were a Mondrian and a Miro. The Miro at least was untypical of this collection, a weak painting. High prices, however, are still paid in the auctions. In the same sale a pic- ture by Robert Delaunay fetched over $5 million — its estimate, $2-3 million. Sold to 'a private European', this painting is an abstract work with not a part of the body in sight. In Paris, a Gauguin landscape fetched a record price.

Christie's New York sale of Impression- ist and Modern Paintings ended part one with 38 lots sold and 22 lots bought in. This did not seem to be good news, but the dealers were smiling again. The rest of the sales were patchy but still the dealers smiled. For some months, the auctions have been dominated by collectors. If the collector really wanted a picture he bid for it, but with no opposition from the trade. For the first time the dealers are beginning to bid again.

One group of people noticeable by their absence were the Japanese. They were absent as buyers in New York but present as sellers and were well pleased with the prices that they received for their goods. The Japanese moved into the art market straight after Black Monday in October 1987. They saw art, and in particular Mod- ern and Impressionist paintings, as an alternative investment to the stock market. There is very little personal money in Japan, which has high taxation and higher death duties. In Japan the real wealth comes from the controlling of money, the owning of companies where the proprietor is, in effect, the same as the company. If he will buy art, then art is bought. Many of these people were real estate dealers, well used to borrowing money, often used to their assets showing no cash return; used to assets that rely on capital appreciation to make a profit for their owners. The art market suited these people. They bought paintings by the dozen. One such, when viewing a sale at Sotheby's, said, 'Why are we selecting which lots to buy? Why do I not buy the whole of the second part of the sale? I can well afford it.'

The prices seemed to these people small by comparison with those that they paid for land. Indeed they were. All went well while the price of land went up, but when the world changed and the price of land went down, so did the price of pictures, for the finance companies squeezed again and they began to sell. Why are these collectors happy with the prices that they have been receiving in New York? They are happy to be able to sell at all. They are happy that there still is a market in art, for the build- ings that they bought are often unsaleable at any price.

So are the Japanese out of the market? No, just in different fields — dolls, for• instance. Dolls fetch very large prices in Japan, often in excess of £50,000. The dolls have, of course, to be asked by their collec- tors — Japanese doll collectors always talk to their dolls — whether they wish to become part of their collection or not. Dolls can be unreliable in their answers, but while the Japanese offer them comfort- able homes and often other enticements, the market in dolls will stay brisk. The Japanese are by nature true collec- tors. They have the tradition of the kura or storehouse for keeping their collections., displaying a painting taken from their stores for just the right amount of time, on just the right occasion, to just the right per son. Until a collector has a warehouse in which to keep his collection, he is no col- lector, he is merely furnishing his home. So for the Japanese dealers there is no nced for the circular sent out by the commune of Minami Azab, a wealthy suburb of Tokyo with many foreigners living there. The cir- cular was in English and said, 'If you are contemplating suicide, please do not use the gas. It will merely create destruction In the neighbourhood.'