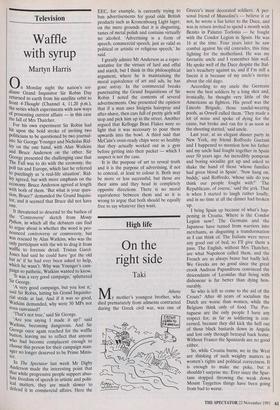 Qn Monday night the nation's soi- thsant Grand Inquisitor Sir Robin Day returned to earth from his satellite orbit to front 4-Thought (Channel 4, 11.20 p.m.), the series which experiments with new ways of presenting current affairs — in this case the fall of Mrs Thatcher.

For his own experiment Sir Robin had hit upon the bold stroke of inviting two Politicians to be questioned by two journal- ists: Sir George Younger and Nicholas Rid- ley on the one hand, with Alan Watkins and Bruce Anderson on the other. Sir George presented the challenging case that The Fall was to do with the economy, the poll tax and Europe, which last he referred to puzzlingly as 'a real-life situation'. Rid- ley agreed, but with more emphasis on the economy. Bruce Anderson agreed at length With both of them. 'But what is your ques- tion, Bruce?' demanded the Grand Inquisi- tor, and it seemed that Bruce did not have one.

It threatened to descend to the bathos of the 'Controversy' sketch from Monty Python, in which all the debaters can find to argue about is whether the word is pro- nounced controversy or controversy, but was rescued by Alan Watkins, who was the only participant with the wit to drag it from Waffle to forensic detail. Tristan Garel- Jones had said he could have 'got the old bat in' if he had ever been asked to help, Which he wasn't. Why was Younger's cam- Paign so pathetic, Watkins wanted to know.

It was a very good campaign,' spluttered Sir George. 'A very good campaign, but you lost it,' said Sir Robin, hitting his Grand Inquisito- rial stride at last. And if it was so good, Watkins demanded, why were 50 MPs not even canvassed?

Are you saying 1 made it up?' said Watkins, becoming dangerous. And Sir George once again reached for the waffle button, leaving me to reflect that anyone who had become complacent enough to Choose this person for their campaign man- ager no longer deserved to be Prime Minis- ter.

In The Spectator last week Mr Digby Anderson made the interesting point that that while progressive people support abso- lute freedom of speech in artistic and polit- ical matters, they are much slower to defend it in commercial affairs. Here the

EEC, for example, is currently trying to ban advertisements for good olde British products such as Kronenbourg Light lager, on the mere grounds that it is disgusting, tastes of metal polish and contains virtually no alcohol. 'Advertising is a form of speech, commercial speech, just as valid as political or artistic or religious speech,' he said.

I greatly admire Mr Anderson as a repre- sentative for the virtues of lard and offal and starch, but I think in this philosophical argument, where he is maintaining the moral equivalence of art and ads, he has gone astray. In the commercial breaks punctuating the Grand Inquisitions of Sir Robin I noted the contents of several advertisements. One presented the opinion that if a man uses Insignia hairspray and after-shave, then cars full of pretty girls will stop and pick him up in the street. Another argued that Kelloggs Bran Flakes were so light that it was necessary to pour them upwards into the bowl. A third said that McCain's oven-ready chips were so healthy that they actually worked out in a gym before getting into their packet — which I suspect is not the case.

It is the purpose of art to reveal truth and it is the purpose of advertising, if not to conceal, at least to colour it. Both may be more or less successful, but those are their aims and they head in completely opposite directions. There is no moral equivalence between them and so it is wrong to argue that both should be equally free to say whatever they want.