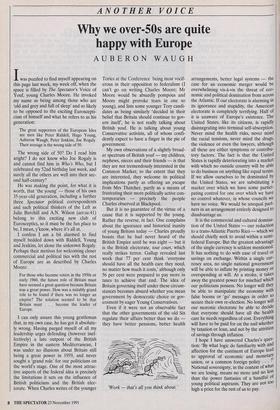 Why we over-50s are quite happy with Europe

Iwas puzzled to find myself appearing on this page last week, my week off, when the space is filled by The Spectator's Voice of Youf, young Charles Moore. He invoked my name as being among those who are 'old and grey and full of sleep' and so likely to be opposed to the exciting Euroscepti- cism of himself and what he refers to as his generation:

The great supporters of the European Idea are men like Peter Riddell, Hugo Young, Auberon Waugh, Peter Jenkins, Joe Rogaly. Their average is the wrong side of 50.

The wrong side of 50? Do I read him aright? I do not know who Joe Rogaly is and cannot find him in Who's Who, but I celebrated my 52nd birthday last week, and surely all the others are well into their sec- ond half-century?

He was making the point, for what it is worth, that 'the young' — those of his own 35-year-old generation, including a further three Spectator political correspondents and such political thinkers of the Left as Julie Burchill and A.N. Wilson (aet:su:41) belong to this exciting new club of Eurosceptics, so it must be the fun place to be, I mean, y'know, where it's all at.

I confess I am a bit alarmed to find myself bedded down with Riddell, Young and Jenkins, let alone the unknown Rogaly. Perhaps their motives for welcoming closer commercial and political ties with the rest of Europe are as described by Charles Moore:

For those who became voters in the 1950s or early 1960, the future role of Britain must have seemed a great question because Britain was a great power. How was a suitably grand role to be found if there was no longer an empire? The solution seemed to be that Britain must . . . become the leader of Europe.

I can only assure this young gentleman that, in my own case, he has got it absolute- ly wrong. Having purged myself of all my leadership urges defending (however inef- fectively) a late outpost of the British Empire in the eastern Mediterranean, I was under no illusions about Britain still being a great power in 1959, and never sought a 'grand role' for our politicians on the world's stage. One of the most attrac- tive aspects of the federal idea is precisely the limitations it sets on the influence of British politicians and the British elec- torate. When Charles writes of the younger Tories at the Conference being most vocif- erous in their opposition to federalism (I can't go on writing Charles Moore; Mr Moore would be absurdly pompous and Moore might provoke tears in one so young), and lists some younger Tory candi- dates as being similarly 'decided in their belief that Britain should continue to gov- ern itself', he is not really talking about British youf. He is talking about young Conservative activists, all of whom confi- dently expect to have a finger in the pie of government.

My own observations of a slightly broad- er spectrum of British youf — my children, nephews, nieces and their friends — is that they are not tremendously interested in the Common Market; to the extent that they are interested, they welcome its political implications partly as offering an ,escape from Mrs Thatcher, partly as a means of frustrating their more politically active con- temporaries — precisely the people Charles observed at Blackpool.

But it is no guarantee of the virtue of a cause that it is supported by the young. Rather the reverse, in fact. One complains about the ignorance and historical inanity of young Britons today — Charles proudly boasts that he had never heard of the British Empire until he was eight — but it is the British electorate, tout court, which really strikes terror. Gallup revealed last week that 77 per cent think 'everyone should have all the health care they need, no matter how much it costs,' although only 56 per cent were prepared to pay more in taxes to achieve that end. The idea of Britain governing itself under these circum- stances becomes absurd whether you mean government by democratic choice or gov- ernment by eager Young Conservatives.

Even if it were not an observable fact that the other governments of the old Six regulate their affairs better than we do — they have better pensions, better health 'Work — that's all you think about.' arrangements, better legal systems — the case for an economic merger would be overwhelming vis-a-vis the threat of eco- nomic and political domination from across the Atlantic. If our electorate is alarming in its ignorance and stupidity, the American electorate is completely terrifying. Half of it is unaware of Europe's existence. The United States, like its citizens, is rapidly disintegrating into terminal self-absorption. Never mind the health risks, never mind the racial tensions, never mind the drugs, the violence or even the lawyers, although all these are either symptoms or contribu- tory factors. The fact is that the United States is rapidly deteriorating into a market with which no outside country will be able to do business on anything like equal terms. If we allow ourselves to be dominated by the United States, we are substituting 3 market over which we have some partici- pating control for one over which we have no control whatever, in whose councils we have no voice. We would be unequal part- ners in an arrangement entirely designed to disadvantage us.

It is the commercial and cultural domina- tion of the United States — our reduction to a trans-Atlantic Puerto Rico — which we should chiefly seek to avoid within a semi federal Europe. But the greatest advantage of the single currency is seldom mentioned. It has nothing to do with ease of travel or savings on exchange. Within a single cur- rency area, no single national government will be able to inflate by printing money or overspending at will. At a stroke, it takes away the greatest power for mischief which our politicians possess. No longer will theY be able to manipulate the economy with false booms or 'go' messages in order to secure their own re-election. No longer will our moronic electorate be able to decide that everyone should have all the health care he needs regardless of cost. Everything will have to be paid for on the nail whether by taxation or loan, and not by the attrition of savings through inflation.

I hope I have answered Charles's ques- tion: `By what logic do familiarity with and affection for the continent of Europe lead to approval of economic and monetarY, union, or a common foreign policy. • • ? National sovereignty, in the context of what we are losing, means no more and no less than the power fantasies of a handful of young political aspirants. They are not ton high a price for the rest of us to pay.