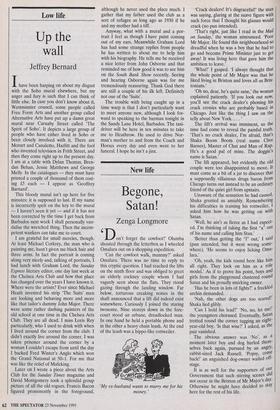 Don't forget the cowfoot!' Olumba shouted through the letterbox as I wheeled Omalara out on a shopping expedition.

'Can the cowfoot walk, mummy?' asked Omalara. There was no time to reply to this cryptic question. I had reached the lifts on the ninth floor and was obliged to greet an elderly cockney couple whom I had vaguely seen about the flats. They stood gazing through the landing window. Far below, torturous creaking noises in the shaft announced that a lift did indeed exist somewhere. Curiously I joined the staring twosome. Nine storeys down in the fore- court stood an urbane, dreadlocked man. In one hand he held a portable phone and in the other a heavy chain leash. At the end of the leash was a hippo-like rottweiler.

'My ex-husband wants to marry me for his money.' 'Crack dealers! It's disgraceful!' the man was saying, glaring at the suave figure with such force that l thought his glasses would crack (no pun intended). 'That's right, just like I read in the Mail on Sunday,' the woman announced. 'Poor Mr Major. He found this neighbourhood so dreadful when he was a boy that he had to go and become Prime Minister just to get away! It was living here that gave him the ambition to leave.'

'What!' I gasped. 'I always thought that the whole point of Mr Major was that he liked living in Brixton and loves all us Brix- tonians.'

'Oh no, dear, he's quite sane,' the woman explained patiently. 'If you look out now, you'll see the crack dealer's phoning his crack cronies who are probably based in Chicago. Just like the thing I saw on the telly about New York. . . . '

The lift's arrival was imminent, so the time had come to reveal the painful truth. 'That's no crack dealer, I'm afraid, that's Shaka Boom Boom (real name Clive Barnes), Master of Chat and Man of Rap. He's a good pal of mine. The doggie's name is Satan.'

The lift appeared, but evidently the old couple were too disappointed to move. It must come as a bit of a jar to discover that a supposedly villainous drugs baron from Chicago turns out instead to be an ordinary friend of the quiet girl from upstairs. Unaware of the sensation he had caused, Shaka greeted us amiably. Remembering his difficulties in training his rottweiler, I asked him how he was getting on with Satan.

'Well, he ain't as fierce as I had expect- ed. I'm thinking of taking the first "a" out of his name and calling him Stan.' 'Better than getting the "1" out,' I said (pun intended, but it went wrong some- where). 'He seems to enjoy licking Onia- lara.'

'Oh, yeah, the kids round here like him all right. They look on him as a role model.' As if to prove his point, boys and girls from the playground clustered round Satan and his proudly smirking owner. 'Has he been in lots of fights?' a freckled urchin demanded.

'Nah, the other dogs are too scared!' Shaka lied glibly. 'Can I hold his lead?"No, no, let me' the youngsters chorused. Eventually, Satan trotted round the corner tugging an eight- year-old boy. 'Is that wise?' I asked, as the pair vanished.

The obvious answer was 'No', as a moment later boy and dog hurled them- selves back again, pursued by an angry, rabbit-sized Jack Russell. 'Popsy, come back!' an anguished dog-owner wailed off- stage. It is as well for the supporters of onc Government that such stirring scenes did not occur in the Brixton of Mr Major's day. Otherwise he might have decided to stay here for the rest of his life.