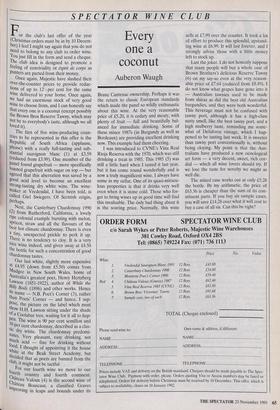 Every one a coconut

For the club's last offer of the year (Christmas orders must be in by 10 Decem- ber) I feel I might say again that you do not need to belong to any club to order wine. You just fill in the form and send a cheque. The club idea is designed to promote a feeling of conviviality or esprit de corps as Punters are parted from their money.

Once again, Majestic have slashed their over-the-counter prices to provide reduc- tions of up to 122 per cent for the same wine delivered to your home. Once again, Nye had an enormous stock of very good wine to choose from, and I can honestly say that every one is a coconut (except possibly the Brown Bros Reserve Tawny, which may not be to everybody's taste, although we all loved it).

The first of five wine-producing coun- tries to be represented in this offer is the Republic of South Africa (applause, Please) with a really full-tasting and sub- stantial sauvignon blanc (1) at £3.59 (reduced from £3.99). One member of the Panel found grapefruit — more specifically toasted grapefruit with sugar on top — but agreed that this aberration was saved by a good acid level to become an excellent

Maker at Vredendal, I have been told, is called Giel Swiegers. Of Scottish origin, Perhaps.

Next, the Canterbury Chardonnay 1990 (2) from Rutherford, California, a lovely ripe colonial example bursting with melon, apricot, straw and all the flavours of the best hot climate chardonnay. There is even a tiny, unexpected prickle to perk it up. There is no tendency to cloy. It is a very nice wine indeed, and given away at £4.50 the bottle for such a concentration of good Chardonnay tastes. Our last white, slightly more expensive at £4.95 (down from £5.50) comes from Mudgee in New South Wales, home of Australia's greatest poet, Henry Hertzberg Lawson (1851-1922), author of While the Billy Boils (1896) and other works. Hence its name — N.B. Poet's Corner (3), rather than Poets' Corner — and hence, I sup- Pose, the picture on the label which must sil,row H.H. Lawson sitting under the shade cn a Coolabar tree, waiting for it all to hap- Pen. The wine is 90 per cent semillon and 1° Per cent chardonnay, described as a clas- sic dry white. The chardonnay predomi- nates. Very pleasant, easy drinking, not Much acid — fine for drinking without food. I thought of appointing it the house White at the Beak Street Academy, but decided that as poets are banned from the club, it might not be tactful. , f Por our fourth wine we move to our °"rth country and fourth continent.

bateau Valoux (4) is the second wine of -:. bateau Bouscaut, a classified Graves improving in leaps and bounds under its Brane Cantenac ownership. Perhaps it was the return to classic European standards which made the panel so wildly enthusastic about this wine. At the very reasonable price of £5.20, it is cedary and meaty, with plenty of fruit — full and beautifully bal- anced for immediate drinking. Some of these minor 1987s (in Burgundy as well as Bordeaux) arc providing excellent drinking now. This example had them cheering. I was introduced to CVNE's Vina Real Rioja Reserva with the 1970, which was still drinking a treat in 1985. This 1985 (5) was still a little hard when I tasted it last year, but it has come round wonderfully and is now a truly magnificent wine. I always have some in my cellar. One of its quasi-miracu- lous properties is that it drinks very well even when it is stone cold. Those who for- get to bring wines up in good time will find this invaluable. The only bad thing about it is the soaring price. Normally, this wine sells at £7.99 over the counter. It took a lot of effort to produce this splendid, upstand- ing wine at £6.99. It will last forever, and I strongly advise those with a little money left to stock up.

Last the joker. I do not honestly suppose that many people will buy a whole case of Brown Brothers's delicious Reserve Tawny (6) on my say-so even at the very reason- able price of £7.64 (reduced from £8.49). I do not know what grapes have gone into it — Australian tawnies used to be made from shiraz as did the best old Australian burgundies, and they were both wonderful. This beverage must not be confused with tawny port, although it has a high-class nutty smell, like the best tawny port, and a high mulberry taste, reminding me some- what of Delaforce vintage, which I hap- pened to be tasting last week. It is sweeter than tawny port conventionally is, without being cloying. My point is that the Aus- tralians have produced a new oenological art form — a very decent, sweet, rich cor- dial — which all wine lovers should try. If we lose the taste for novelty we might as well die.

The mixed case works out at only £5.28 the bottle. By my arithmetic, the price of £63.36 is cheaper than the sum of its con- stituent parts. If you buy six sample cases, you will save £14.28 over what it will cost to buy a case Of all six. Can this be right?