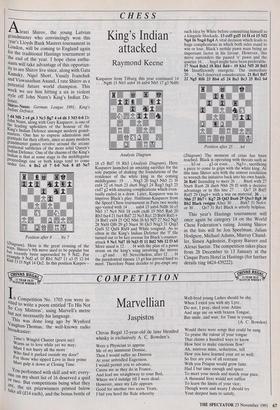 Alexei Shirov, the young Latvian grandmaster who convincingly won this :,ear's Lloyds Bank Masters tournament in London, will be coming to England again for the traditional Hastings tournament at the end of the year. I hope chess enthu- siasts will take advantage of this opportun- ity to see Shirov live since, along with Gata Kamsky, Nigel Short, Vassily Ivanchuk and Viswanathan Anand, I rate Shirov as a potential future world champion. This week we see him hitting a six in violent

1 d4 Nf6 2 c4 g6 3 Nc3 Bg7 4 e4 d6 5 Nf3 0-0 Dr John Nunn, along with Gary Kasparov, is one of the leading upholders of the honour of the king's Indian Defence amongst modern grand- masters. One has to express admiration and gratitude for their efforts, since so many modern grandmaster games revolve around the arcane positional subtleties of the more solid Queen's Indian Defence. One of the charms of the King's Indian is that at some stage in the middlegame Proceedings one or both kings tend to come under fire. 6 Be2 e5 7 0-0 Nc6 8 d5 Ne7

This year's Hastings tournament will once again be category 14 on the World Chess Federation's rating. Joining Shirov in the lists will be Jon Speelman, Julian Hodgson, Michael Adams, Murray Chand- ler, Simen Agdestein, Evgeny Bareev and Alexei Suetin. The competition takes place from 28 December to 13 January at the Cinque Ports Hotel in Hastings (for further details ring 0424-439222).