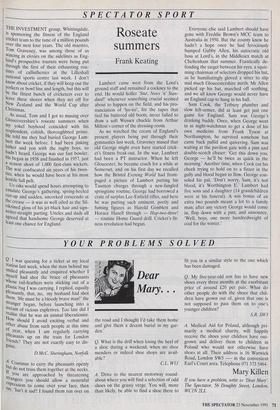 Q. I was queuing for a ticket at my local station last week, when the man behind me smiled pleasantly and enquired whether I myself had shot the brace of pheasants Whose tail-feathers were sticking out of a Plastic bag I was carrying. I replied, equally Pleasantly, that, no, my husband had shot them. 'He must be a bloody brave man!' the stranger began, before launching into a stream of vicious expletives. Too late did I realise that he was an animal liberationist. 'low should I avoid exciting verbal and Other abuse from such people at this time Of year, when I am regularly carrying pheasants up on the train for London riends? They are not exactly easy to dis- guise.

D.McC. Sheringham, Norfolk Continue to carry the pheasants openly but do not truss them together at the necks. If you are approached by threatening strangers you should allow a mournful expression to come over your face, then say, Isn't it sad? I found them run over on

the road and I thought I'd take them home and give them a decent burial in my gar- den.'

Q. What is the drill when losing the heel of a shoe during a weekend, when no shoe menders or indeed shoe shops are avail- able?

C.L. WI I A. Drive to the nearest motorway round- about where you will find a selection of odd shoes on the grassy verge. You will, more than likely, be able to find a shoe there to fit you in a similar style to the one which has been damaged.

Q. My five-year-old son has to have new shoes every three Months at the exorbitant price of around £20 per pair. What do other people do with the shoes that chil- dren have grown out of, given that one is not supposed to pass them on to one's younger children?

S.R. SW3 A. Medical Aid for Poland, although pri- marily a medical charity, will happily receive the shoes your children have out- grown and deliver them to children in Poland who would not otherwise have shoes at all. Their address is 16 Warwick Road, London SW5 — in the convenient Earl's Court area. Telephone 071 373 5464.

If you have a problem, write to 'Dear Mary'. The Spectator, 56 Doughty Street, London, WC1N 2LL