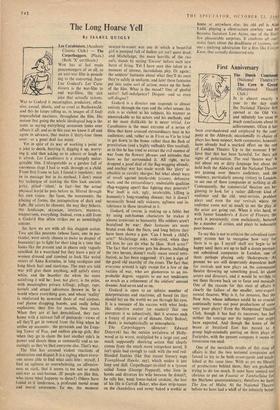 WAR has at last made peacemongers of us all, so

an anti-war film is preach-

biniers is the war-film to end war-films, the sick joke that actually sickens. War to Godard is meaningless, predatory, offen- sive, casual, idiotic, and as cruel as Buchenwald; and this he keeps telling us, in images of (I find) unparalleled nastiness, throughout the film. His notion that going the whole ideological hog is the same as saying everything seventeen times over affects it all: and as in this case we know it all and agree in advance, that makes it thirty-four times over --or a great deal too many.

Yet in spite a its way of working a point or a joke to death, burying it, digging it up, worry- ing it, and then asking us to admire or laugh at it afresh, Les Carabiniers is a strangely unfor- gettable film. Unforgettable as a garden full of enormous slugs I had to walk through as a child. From first frame to last, I found it repulsive: not in its message but in its method. I don't mean his technique of making the film look ancient, jerky. pitted—`silent,' in fact—but the actual physical world he puts before us, filtered through his own vision : the faces, the movements, the placing of forms, the juxtaposition of dark and light, the actors he chooses, the way they behave, the landscape, skyscape, interiors, manners, mannerisms, everything. Indeed, even a still from a Godard film often strikes me as unwittingly sinister.

So, here we are with all this sluggish action. Two ape-like peasants (whose faces, one in par- ticular, were surely chosen to make us despair of humanity) go to fight for their king in a time that looks like the present and in places only vaguely specified. ln i wasteland hut they leave a pair of women dressed and combed to look like weird sisters of Anna Karenina, in long cardigans and long black hair and stockings. The men are told war will give them anything, will satisfy every whim, and the beastlier the whim the more satisfying it will be: loot, not glory, is the prize, with meaningless private killings, pillage, rape, tortide and sexual adventure thrown in. In a world where everything goes, and whose 'reality' is reinforced by newsreel Shots of real corpses, real planes dropping bombs, and really lethal explosions, they live for months, then years. When they are at last demobilised, they race home with .a suitcase full of postcards—views of all they'll get in reward from the king when he settles up accounts: the pyramids and the Lean- ing Tower of Pisa, and endless pin-up girls. But when they go to claim the loot another side's in power and shoots them as summarily and as un- caringly as they've Shot everyone else. That's war.

The film has aroused violent reactions of admiration and disgust. It is a ragbag where every- one seems able to find what suits him: myself, I find an ugliness so overwhelming, an offensive- ness so stark, that it seems to me not so much anti-war as anti-human. (If people are like this, who cares what happens to them?) Others have found in it tenderness, a profound moral sense and moral awareness. To me, the moment nearest-to-vomit was one in which a beautiful girl is pumped full of bullets yet isn't quite dead, and Michelange, the more horrific of the two oafs, stands by saying 'Encore' before each new burst of firing. Yet I have seen this taken as a moment of intense, incredulous pity. Or again: the soldiers' fantasies about what they'll do once they're safely in uniform, and later these fantasies put into some sort of action, make up the body of the film. What is the mood? One of gleeful satire? Self-indulgence? Disgust----and so even self-disgOst?

Godard is a director one responds to almost entirely through the eyes and the other senses; his style is as violent as his subjects, his manner as unmistakable as his actors and his methods, and at his most dislikable he is never trivial. Les Carabiniers is the most extreme of a series of films that have aroused extraordinary heat in his audiences; and, rather as in Vivre sa Vie he tried to get down to the bones rather than the flesh of prostitution (and a highly unfleshly film resulted), so in.this he has tried to extract the evil essence of war from the flowery phrases and attitudes that have so far surrounded it. All right, we've dropped a good deal of the flag-wagging already, and nuclear war has made words like 'glory' as obsolete as cavalry charges; but what about wars of revolt against intolerable tyranny, defensive wars, and the extraordinary, undeniable qualities (flag-wagging apart) that fighting may generate? War itself is sick, ugly, intolerable, killing is humanity's long-standing disease; but it doesn't necessarily breed only sickness, ugliness and in- tolerance in those involved in it.

Godard, of course, is making up a fable; but by using sub-human characters he makes it almost irrelevant to humanity. His soldiers aren't brutalised by war: their fantasies are more brutal even than the facts, and long before they have been shown a gun. 'Can I break a child's arm?' Michelange asks, wide-eyed, when they tell him he can do what he likes. 'Both arms?' The fact that everyone gets his deserts, including the two heroes, doesn't really mean moral retri- bution, as has been suggested: it's just a sign of the good old anarchy of the times. The fact that everyone around is ugly except for a few of the victims of war, who arc glamorous to an im- probable degree, suggests to me not tenderness so much as a refinement of the soldiers' sensual dreams. And so on and so on.

Godard is open to an infinite number of interpretations and reactions, all based (as they should be) on the world we see through his eyes. It is a measure of his success with what looks like objective matter (or matters) that one interprets it so subjectively, that it arouses such a frenzy of praise or of distaste. Only Bufiuel, I think, is metaphysically as atmospheric.

The Carpetbaggers (director : Edward Dmytryk) has the outsize awfulness of Holly- wood at its worst, multiplied by a large cast and much supposedly shocking action that clearly comes from the much more outspoken novel. It isn't quite bad enough to rank with the real red- blooded funnies (like that recent literary saga Youngblood Hawke, say), which makes it just long and dull. Carpetbagger-in-chief is a tycoon called Jonas (George Peppard), who lives in hotels and divorces his wife because he doesn't, he tells her, want home-baked cookies; the lust

of his life is Carroll Baker, who does strip-teases on the chandeliers and never baked a cookie at home or anywhere else; his old pal is Ala.(' Ladd. playing a silent-screen cowboy, and MI business factotum Lew Ayres, one of the film's few pleasurable surprises. It confirms all one's worst fears about the deadliness of tycoons. and one's undying admiration for a film like

Kane, that actually disinterred one.