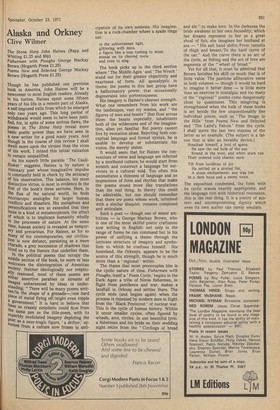 The Stone Harp John Haines (Rapp and Whiting £1.25 and 80p) Fishermen with Ploughs George Mackay Brown (Hogarth Press E1.25) Poems New and Selected George Mackay Brown (Hogarth Press E1.25) Though he has published one previous book in America, John Haines will be a newcomer to most English readers. Already in his forties. Haines spent some fifteen Years of his life in a remote part of Alaska, a self-imposed exile from which he emerged Only two years ago. This long period of Withdrawal would seem to have been justified, for, in spite of some serious flaws, the Poems in The Stone Harp reveal more basic poetic power than we have seen in a new writer for a good many years. And though in the course of this review I shall dwell more upon the virtues than the vices of his work, I intend this initial valuation to remain unqualified.

As his superb little parable 'The Cauliflower' suggests, Haines is by nature a visionary poet whose imaginative impulse Is constantly held in check by the accuracy Of his observation. This balance, his most distinctive virtue, is most in evidence in the first of the book's three sections. Here, in the flux of the natural world, he finds Microscopic analogies for larger human conflicts and disasters. His metaphors and Personifications are so extended that they issue in a kind of metamorphosis, the effect of Which is to implicate humanity wholly al the processes of nature. At the same time, human society is revealed as temporary and precarious. For Haines, as for so anY of his contemporaries, our civilization is now defunct, persisting as a mere charade, a grey succession of shadows that blind us to the Nature that underlies them.

,In the political poems that occupy the Middle section of the book, he more or less Welcomes the disintegration of American society. Neither ideologically nor sceptic reasoned, most of these poems are !Ither assertive parables or streams of Irnages unharnessed by ideas or understanding. "There will be many poems written/in the shape of a grenade—/one hard 1:1ece of metal flying off/might even topple government." It is hard to believe that ones so crassly simplistic could flow from tshe same pen as the title-poem, with its _ooperbly modulated imagery depicting the P et as a near-tragic figure, 'a drifter,' upro oted from a culture now frozen in anti cipation of its own nemesis. His imagination is a rock-chamber where a spade rings out :

in the subterranean light, glittering with mica, a figure like a tree turning to stone stands on its charred roots and tries to sing.

The book picks up in the third section where 'The Middle Ages ' and The Wreck' stand out for their greater objectivity and exactness of form. All apocalyptic in theme, the poems in this last group have a hallucinatory power, that occasionally degenerates into portentousness. His imagery is Haines's clearest strength. What one remembers from his work are the landscapes, vast icy wastes, and "the figures of men and beasts "that float across them: the beasts especially, inhabitants both of the wilderness and of the imagination, alien yet familiar. But poetry cannot live by evocation alone. Rejecting both conceptual language and formal syntax, he is unable to develop or substantiate his vision. He merely states.

It would seem that for Haines the conventions of verse and language are infected by a moribund culture; he would start from scratch and construct a language for survivors in a cultural void. Too often this necessitates a thinness of language and an imprecision of form and rhythm that make the poems sound more like translations than the real thing. In theory this could be admirable, but one should remember that there are poets whose work, informed with a similar disquiet, remains composed and articulate.

Such a poet — though one of minor ambitions — is George Mackay Brown, who is one of the most skilful poetic craftsmen now writing in English: not only in the range of forms he can command but in his power of unifying a theme through the intricate structure of imagery and symbolism to which he confines himself. His homeland, the Orkneys, appears to be the source of this strength, though he is much more than a ' regional ' writer.

The theme that most preoccupies him is the cyclic nature of time. Fishermen with Ploughs, itself a 'Poem Cycle,' begins in the Dark Ages: a tribe of Norse fishermen, in flight from pestilence and war, makes a landfall in Orkney and settles there. The cycle ends (and begins again) when the process is repeated by modern men in flight from the 'Black Pentecost' of nuclear war. This is the cycle of human history. Within it occur smaller cycles, often figured by wheels, arcs, circles. In one beautiful lyric, a fisherman and his bride on their wedding night retire from the " Circlings of bread and ale" to make love. In the darkness the bride awakens to her own fecundity, which her dreams represent to her as a great shoal of fish; she imagines her husband at sea — " His salt hand shifts/From tumults of thigh and breast/To the hard curve of the oar." And the curve there is an arc of the cycle, as fishing and the act of love are segments of the "wheel of bread."

Yet for all that, it must be admitted that Brown lavishes his skill on much that is of little value. The pastiche alliterative verse in both volumes — though it would be hard to imagine it better done — is little more than an exercise in nostalgia; and too many of the " regional " poems come dangerously close to quaintness. This misgiving is strengthened when the bulk of these books is set beside the few unquestionably fine individual pieces, such as 'The Image in the Hills' from Poems New and Selected and 'The Laird's Falcon' from the cycle. I shall quote the last two stanzas of the latter as an example. (The subject is a falcon that is also an heraldic device.)

Steadfast himself, a lord, of space, He saw the red hulk of the sun Strand in the west, and white stars run Their ordered cold chaotic race: Till from lucidities of ice He settled on a storied fist, A stone enchantment, and was lost In a dark hood and a sweet voice.

The exposition condensed, the form with its cyclic stanza exactly appropriate, and the language rich with historical resonance, this is the real thing. It is a poetry of austere and uncompromising dignity which even its own author can rarely emulate.