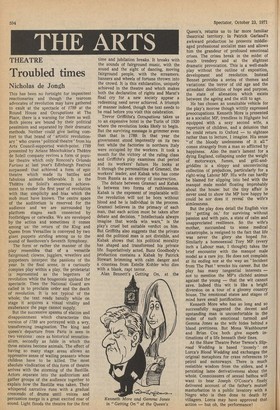 This has been no fortnight for impenitent reactionaries and though the tearoom advocates of revolution may have gathered to exult at the spectacle of 1789 at the Round House and Occupations at The Place, there is a warning for them as well. Both pieces are bound by their political pessimism and separated by their dramatic methods. Neither could give lasting comfort to that brand of ' artistic revolutionary' who craves ' political theatre ' from his Arts Council-supported watch-point. 1789 presented by Ariane Mnochukine's Theatre de Soleil company revives a form of popular theatre which only Ronconi's Orlando Furioso at last year's Edinburgh Festival surpassed: that achieved a form of epic theatre which made its battles and fabulous animals believable. It is the Theatre du Soleil's enormous achievement to render the first year of revolution with that simplicity and bias which the mob must have known. The centre space of the auditorium is reserved for the audience and we are surrounded by platform stages each connected by footbridges or catwalks. We are enveloped by the action and sometimes it comes among us: the return of the King and Queen from Versailles is conveyed by two giant puppets striding among us to the sound of Beethoven's Seventh Symphony.

The form or rather the manner of the play resembles that of a versatile fairground; clowns, jugglers, wrestlers and puppeteers interpret the passions of the year. In the final scene, in a curiously complex play within a play, the proletariat is represented as the begetters of revolution while the bougeoisie applaud the spectacle, Then the National Guard are called in to proclaim order and the death of revolution. It is not typical of the whole; the text reads banally while on stage it acquires a visual vitality and exuberance the page cannot supply.

But the successive spasms of elation and disappointment which characterize this version of 1789 are portrayed with a wry, transforming imagination. The king and queen's departure from Paris is seen in two versions : once as historical sensation alism, secondly as fable in which the three estates become animals. The effect of having so many stage areas allows an oppressive sense of wailing peasants whose children have to be killed. The most absolute vindication of this form of theatre arrives with the storming of the Bastille. Actors separate into the auditorium and gather groups of the audience together to explain how the Bastille was taken. Their whispered narrative runs with a gradual crescendo of drums until voices and percussion merge in a great excited roar of sound. Light floods the theatre for the first time and jubilation breaks. It breaks with the sounds of fairground music, with the sound and the sight of dancing, moving fairground people, with the streamers, banners and wheels of fortune thrown into the crowd. It is this exhilaration, uniquely achieved in the theatre and which makes both the declaration of rights and Marat's final cry for a new society appear a redeeming need never achieved. A triumph of manner indeed, though the text needs to be read before you visit this celebration.

Trevor Griffiths's Occupations takes us to an expensive hotel in the Turin of 1920 where the revolution looks likely to begin. But the surviving message is grimmer even than that in 1789. In that year the government stood impotently on its two feet while the factories in northern Italy were occupied by the workers. It took a month for the victory of the ruling class and Griffiths's play examines that period and its workers' failure. He looks at it through the personalities of Gramsci, the workers' leader, and Kabak who has come from Russia as an envoy of insurrection.

The debate between Gramsci and Kabak is between two forms of ruthlessness. Kabak is the exponent of implacable will: the revolution will not be born without Wood and he is individual in the process. Gramsci believes in the primacy of each man, that each action must be taken after debate and decision. "Intellectuals always imagine that words win wars," is the play's cruel but suitable verdict on him. But Griffiths also suggests that the private and the political man is not divisible, and Kabak shows that his political morality has shaped and transformed his private life. Superlatively acted, Buzz Goodbody's production contains a Kabak by Patrick Stewart brimming with calm danger and a countess from Estelle Kohler who dies with a blank, rapt terror.

Alan Bennett's Getting On, at the Queen's, returns us to far more familiar theatrical territory. In Patrick Garland's awkward production he presents middleaged professional socialist man and allows him the grandeur of profound emotional crises. The crises break in the midst of much trendery and at the slightest dramatic provocation. This is a well-made play without the outline of exposition, development and resolution. Instead Bennet provides a series of themes and variations: the terror of old age and the attendant dereliction of hope and purpose, the state of alienation which exists between the ageing and the still to age.

He has chosen an unsuitable vehicle for the play's morose though wittily expressed preoccupations. Kenneth More is presented as a socialist MP, trendless in Highgate but equipped with a sexy second wife, a repertoire of children, and a delusion that he could return to Oxford — to sightsee rather than to lecture, I imagine. His sense "of the bloody uselessness of it all" comes strangely from a man so afflicted by happiness. Also the man's lament for a dying England, collapsing under the weight of motorways, fumes, and grill-andgriddles is a sloppy and unconvincing collection of prejudices, particularly for a right-wing Labour MP. His wife can hardly be blamed for slipping into bed with the manqué male model floating improbably about the house: but the tiny affair is never used to show the MP how happy he could be nor does it reveal the wife's aimlessness.

But the play does detail the English vice for getting on,' for surviving without passion and with pain, a state of calm and unappreciated resilience. So the wife's mother, succumbed to some medical catastrophe, is resigned to the fact that life was never the glory she hoped for. Similarly a homosexual Tory MP (every inch a Labour man, I thought) takes the brief encounter with the manqué male model as a rare joy. He does not complain at its ending nor at the way an 'Incident from The Past' wrecks his career. But the play has many tangential interests — not to mention the MP's cliched animus against the young — that the wit cannot save. Indeed this wit is like a bright diversion on a tour of a gloomy country house. The emotional states and stages of mind have small justification.

Kenneth More who has so long and so successfully suggested the decent and upstanding man is uncomfortable in the midst of such emotional turmoil and Gemma Jones as the wife hides behind a bland prettiness. But Mona Washbourne and Brian Cox both give superb intimations of a life beneath their lines.