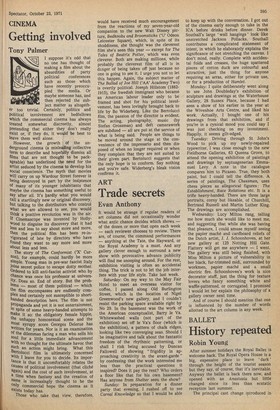 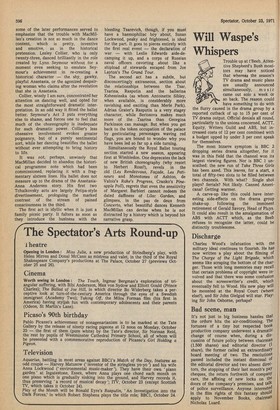 After summer holidays the Royal Ballet is welcome back. The Royal Opera House is a big, expensive place to leave ' dark ' through the height of the tourist season but they say, of course, that it's inevitable. Anyway the ballet is back there now, and opened with an Anastasia but little changed since its less than ecstatic reception last summer.

The principal cast change introduced in some of the later performances served to emphasize that the trouble with MacMillan's creation is not so much in the dance content, which is pretty, inventive and emotive, as in the historical pretension. Lesley Collier, who is only twenty-three, danced brilliantly in the role created by Lynn Seymour without for a moment even seeking to emulate Seymour's achievement in re-creating a historical character — the shy, gawky, playful Anastasia, or the agonized despairing woman who claims after the revolution that she is Anastasia.

Collier, wisely I am sure, concentrated her attention on dancing well, and opted for the most straightforward dramatic interpretation. In an odd way it fitted the ballet better. Seymour's Act 3 puts everything else to shame, and forces one to feel that much of the choreography is inadequate for such dramatic power. Collier's less obsessive involvement evokes greater poignancy, but of a purely sentimental sort, while her dancing beautifies the ballet without ever attempting to bring history to life.

It was not, perhaps, unwisely that MacMillan decided to abandon the historical programme note which had been commissioned, replacing it with a fragmentary sixteen lines. His ballet does not measure up to the drama of the AnastasiaAnna Andersen story. His first two Tchaikovsky acts are largely Petipa-style divertissement, prologuing the marked contrast of the stream of pained consciousness in the third.

The first act is idyllic when it is just a family picnic party. It falters as soon as they introduce the business with the bleeding Tsarevich, though, if you must have a haemophiliac boy about, Susan Lockwood, peaky and frightened, is ideal for the part. It goes to pieces entirely with the first real event — the declaration of war — with Leslie Edwards aide-decamping it up, and a corps of Russian naval officers cavorting about like a shipload of stewards escaped from Joe Layton's The Grand Tour.

The second act has a subtle, but disconcertingly extraneous, section about the relationships between the Tsar, Tsarina, Rasputin and the ballerina Kshessinska (as whom Antoinette Sibley, when available, is considerably more ravishing and exciting than Merle Park). Adrian Grater's Rasputin is a very stagey character, while Beriosova makes much more of the Tsarina than Georgina Parkinson can manage. But when you get back to the token occupation of the palace by gesticulating personages waving red flags, you are bound to wonder why you have been led so far up a side turning.

Simultaneously the Royal Ballet touring section started a new season, appearing first at Wimbledon. One deprecates the lack of new British choreography (why resort to Herbert Ross?), revels in the old (Les Rendezvous, Facade, Les Patineurs and Monotones of Ashton, de Valois's Rake's Progress, Cranko's Pineapple Poll), regrets that even the sensitivity of Margaret Barbieri cannot redeem the dated daffiness of Lilac Garden, and glimpses, in the pas de deux from Concerto, what beautiful dances Kenneth MacMillan can devise when he is not distracted by a history which is beyond his narrative grasp.