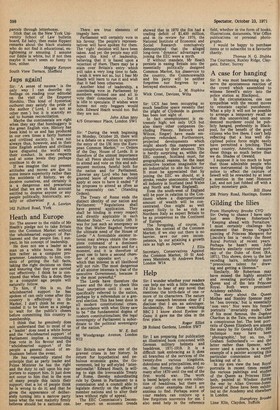 Page 22, 23 October 1971 — Sir: UCS has been occupying so much headline space recently
Close

Sir: UCS has been occupying so much headline space recently

that the plight of Clydeside in general has been lost sight of.

In fact unemployment is extremely high; not only UCS but also many other companies (including Plessey, Babcock and Wilcox, Singer) have made employees redundant. Furthermore, projected developments which might absorb this manpower are conspicuous by their absence. This is hardly surprising as, within the EEC context, Scotland must, for geographical reasons, be the least attractive location imaginable for an industrialist to site his factory. It must be appreciated that by joining the EEC we should, at a stroke, render uneconomic virtually all industry in Scotland (and Wales and North and West England).

Even the south-west of England will be poor in relation to the Continent where a disproportionate amount of wealth will be concentrated. One might as well expect Sicily to be as rich as Northern Italy as expect Britain to be as prosperous as the Continent of Europe. The foregoing, of course, is within the context of the Common Market; if we stay out there is no barrier, save our own incompetence, to our attaining a growth rate as high as Japan's. J. Ellis Secretary, Conservatives Against the Common Market, 10 St Andrews Mansions, St Andrews Road, London W14