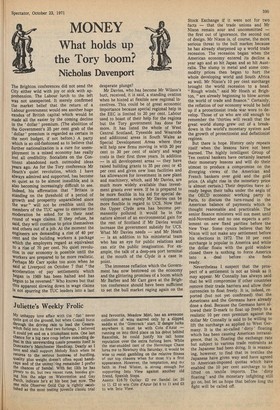 What holds up the Tory boom?

The Brighton conferences did not send the City either wild with joy or sick with apprehension. The Labour lurch to the left was not unexpected. It merely confirmed the market belief that the return of a Labour government would see another huge exodus of British capital which would be made all the easier by the coming decline in the ' dollar ' premium. (The abolition of the Government's 25 per cent grab of the ' dollar ' premium is regarded as certain in the next budget, if not before.) A party Which is so old-fashioned as to believe that further nationalization is a cure for unemployment in a mixed economy has really lost all credibility. Socialists on the Continent abandoned such outmoded ideas Years ago. As for the Tory conference Mr Heath's quiet revolution, which I have always admired and supported, has become so quiet as to be almost inaudible, and is also becoming increasingly difficult to see. Indeed, his affirmation that "Britain is standing on the threshold of a period of growth and prosperity unparalleled since the war" will not be credible until the members of the TUC agree to exercise the moderation he asked for in their next round of wage claims. If they refuse, he said, they will continue to price themselves and others out of a job. At the moment the engineers are demanding a rise of 40 per cent and the building workers a package Which the employers regard as equivalent to a rise of 70 per cent. No quiet revolution in our economy is possible until the Workers are prepared to be more realistic. Perhaps Mr Carr spoke too soon when he said at Liverpool on October 7 that "the acceleration of pay settlements which began in 1969 has been halted and has begun to be reversed." Who knows but that this apparent slowing down in wage claims is not spurring the TUC leaders into a last desperate plunge?

Mr Davies, who has become Mr Wilson's butt, received, it is said, a standing ovation when he hinted at flexible new regional incentives. This could be of great economic importance because special regional help in the EEC is limited to 20 per cent. Labour used to boast of their help for the regions but the Tory government has done far more. It has listed the whole of West Central Scotland, Tyneside and Wearside and additional areas in South Wales as Special Development Areas where they will help new firms moving in with 20 per cent to 30 per cent of salary and wage costs in their first three years. In addition — in all development areas — they have raised building grants to 35 per cent or 45 per cent and given new loan facilities and tax allowances for investment in new plant and machinery, which, said Mr Davies, are much more widely available than investment grants ever were. If he is prepared to be more flexible in his aid for special development areas surely Mr Davies can be more flexible in regard to UCS. Now that the Upper Clyde area has become permanently polluted it would be in the nature almost of an environmental gain for the rest of Scotland if Mr Davies would increase the government subsidy for UCS. What Mr Davies needs — and Mr Heath — is an addition to his ministerial team who has an eye for public relations and can stir the public imagination. For example, the talk of a deep-sea port terminal at the mouth of the Clyde is a case in point.

The immense reflation which the Government has now bestowed on the economy and the glittering promises of a boom which Mr Barber and Mr Carr gave at the Brighton conference should have been sufficient to set the bull market raging again on the Stock Exchange if it were not for two facts — that the trade unions and Mr Nixon remain sour and uncommitted — the first out of ignorance, the second out of design. Mr Nixon is, of course, the more serious threat to the bull market because he has already sharpened up a world trade recession. The recession began when the American economy entered its decline a year ago and so hit Japan and so hit Australia. The slump in metal and some commodity prices then began to hurt the whole developing world and South Africa as well. Mr Nixon's 10 per cent surcharge brought the world recession to a head. "Rough winds," said Mr Heath at Brighton, "are already beginning to blow across the world of trade and finance." Certainly, the reflation of our economy would be held up if a protectionist trade War were to develop. Those of us who are old enough to remember the 'thirties will recall that the great world slump grew out of a breakdown in the world's monetary system and the growth of protectionist and deflationist regions.

But there is hope. History only repeats itself when the lessons have not been learned. The highly intelligent Group of Ten central bankers have certainly learned their monetary lessons and will do their utmost to produce a compromise on the diverging views of the American and French bankers over gold and the gold price. (A slight rise in the monetary price is almost certain.) Their deputies have already begun their talks under the aegis of the OECD economic working party in Paris, to discuss the turn-round in the American balance of payments which is thought reasonable and practicable. The senior finance ministers will not meet until mid-November and no one expects a settlement on new fixed parities before the New Year. Some cynics believe that Mr Nixon will not make any settlement before his elections in 1972, The 10 per cent surcharge is popular in America and while the dollar floats with the gold window closed there is nothing to force America

into a deal before she feels ready.

Nevertheless I suspect that the prospect of a settlement is not as bleak as it may appear. Mr Connally has always said that he will compromise if other countries remove their trade barriers and allow their currencies to float freely. It is, indeed, reported (but not yet confirmed) that the Americans and the Germans have already done a deal. Because the Germans have allowed their D-mark to float up freely to a realistic 10 per cent premium against the dollar Mr Connally is said to be willing to lift the surcharge as applied to West Germany. It is the so-called ' dirty ' floating which has been causing American intransigence, that is, floating the exchange rate but subject to various trade restraints as the Japanese had been doing. It is reassuring, however, to find that in textiles the Japanese have given way and have agreed to American-imposed quotas which have enabled the 10 per cent surcharge to be lifted on textile imports. The 'dirty floating' and the monetary infighting still go on, but let us hope that before long the fight will be called off.