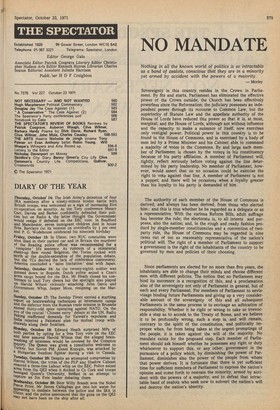 Nothing in all the known world of politics is so intractable as a band of zealots, conscious that they are in a minority yet armed by accident with the powers of a majority.

— Morley Sovereignty in this country resides in the Crown in Parliament. By fits and starts, Parliament has eliminated the effective power of the Crown outside; the Church has been effectively powerless since the Reformation; the judiciary possesses an independent power through its recourse to Common Law, but the superiority of Statute Law and the appellate authority of the House of Lords have reduced this power so that it is, at most, marginal; and the House of Lords, although not without influence and the capacity to make a nuisance of itself, now exercises only vestigial power. Political power in this country is to be found in the House of Commons, and is exercised by a body of men led by a Prime Minister and his Cabinet able to command a majority of votes in the Commons. By and large each member of Parliament is chosen by the voters in his constituency because of his party affiliation. A member of Parliament will, rightly, reflect seriously before voting against the line determined by his party leadership. No member of Parliament, however, would assert that on no occasion could he exercise the right to vote against that line, A member of Parliament is not a puppet; and there will be occasions when a loyalty greater than his loyalty to his party is demanded of him.

The authority of each member of the House of Commons is derived, and always has been derived, from those who elected him: and this is true whether he be regarded as a delegate or as a representative, With the various Reform Bills, adult suffrage has become the rule; the electorate is, to all intents and purposes, also the nation; and, in the rough and ready fashion producd by single-member constituencies and a convention of twoparty rule, the House of Commons may be regarded in nine cases out of ten as reasonably representative of the nation's political will. The right of a member of Parliament to support a government is the right of the inhabitants of the country to be governed by men and policies of their choosing.

Since parliaments are elected for no more than five years, the inhabitants are able to change their minds and choose different men with different policies. The notion that no Parliament may bind its successor is a recognition of this, and a proclamation also of the sovereignty not only of Parliament in general, but of each and every Parliament. For members of Parliament to envisvisage binding future Parliaments and giving up a very considerable amount of the sovereignty of this and all subsequent Parliaments in the same process is to envisage an adbication of responsibility. Whether it be right or wrong to take so irrevocable a step as to accede to the Treaty of Rome, and we believe it to be profoundly wrong, such a step is, and will remain, contrary to the spirit of the constitution, and politically improper when, far from being taken at the urgent promptings of the people, it is taken against the will of the majority. No mandate exists for the proposed step. Each member of Parliament should ask himself whether he possesses any right or duty whatsoever to support this, or any other, government in the pursuance of a policy which, by diminishing the power of Parliament, diminishes also the power of the people from wham that power derives. It is fortunate that there is yet sufficient time for sufficient members of Parliament to express the nation's opinion and come forth to restrain the minority, armed by accident with the powers of a majority, and to defeat that intrac• table band of zealots who seek now to subvert the nation's will and destroy the nation's identity.