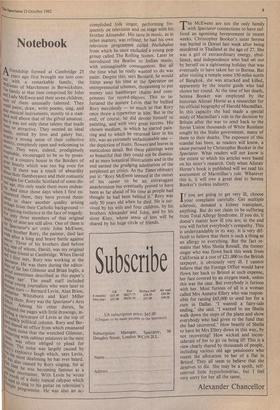 Afriendship formed at Cambridge 23 , Years ago first brought me into con- tact with a remarkable family, the McEwens of Marchmont in Berwickshire. 1is family at that time comprised Sir John and Lady Lady McEwen and their seven children, -ucll of them unusually talented. They could paint, draw, write poems, sing, and Play musical instruments, mostly to a stan- dard well above that of the gifted amateur. thin it was not only these talents that made Lein. so attractive. They seemed an ideal ti'LlitY, united by love and gaiety but, keisPite a strong sense of their collective ntehlititY, completely open and welcoming to 11-Iers. They were, indeed, prodigiously si°sPitable, encouraged to be so by poses- °I1 of a country house in the Borders of heat beauty which was too big even for If there was a touch of absurdity 'rut their flamboyance and their romantic k°stalgia for Catholic Scotland of some dis- ink age, this only made them more endear- og. And since those days when I first en- seitintered them, they have proved them- Derv,es to their another quality arising naPs from Catholic background — ian_s in t;;11 piring resilience in the face of tragedy. fkrnI.Pnly three members of that original the my

of nine are still alive. One of them is

Spectator's art critic John McEwen, ;2, se brother Rory, the painter, died last t: after a long and brave battle against hinicer. Three of his brothers died before and00e of whom, David, was my original anci"l'en friend at Cambridge. When David Spep: first met, Rory was working at the slikator. He was there during the editor- Deris of Sir Ian Gilmour and Brian Inglis, a `goid°c1 sometimes described as this paper's kve;.ilen age'. The small staff included becc;q1 Young journalists who were later to kathrti:, stars — Bernard Levin, Alan Brien, itao Whitehorn and Karl Miller 6Iiing them. Rory was the Spectator's Arts tleco°1-. Among his other duties, he thIciirated the pages with little drawings, in- Irs lOg a caricature of Levin at the top of Iveekl Gard shared Political column. Rory and Ber- so tn "aired an office from which emanated colvetich noise that the wretched Gilmour, ioolnrring with cabinet ministers in the next tileric Was often obliged to plead for korye: The noise was largely caused by Wks ti! explosive laugh which, says Levin, t walle most deafening he has ever heard. that also caused by Rory singing, for at asap me he was becoming famous as a the ,..ar entertainer. With Levin he wrote h words e ot a daily topical calypso which l'otrcl to sing to his guitar on television's 18ht Programme. He was also an ac- complished folk singer, performing fre- quently on television and on stage with his brother Alexander. His taste in music, as in other matters, was refined; he had his own television programme called Hullabaloo from which he once excluded a young pop group called The Rolling Stones. Later he introduced the Beatles to Indian music, with unimaginable consequences. But all the time what he really wanted to do was paint. Despite this, says Bernard, he would fritter away his time at the Spectator on entrepreneurial schemes, threatening to put money into hamburger chains and com- ponents for record-players. This so in- furiated the austere Levin that he bullied Rory mercilessly — so much so that Rory once threw a typewriter at him. But in the end, of course, he did devote himself to painting, and with very great success. His chosen medium, in which he started pain- ting and to which he returned later in his life, was an extremely unfashionable one the depiction of fruits, flowers and leaves in meticulous detail. But these paintings were so beautiful that they could not be dismiss- ed as mere botanical illustrations and in the end earned the grudging admiration of the perplexed art critics. As the Times obituary put it: 'Rory McEwen seemed at the outset of his career to be an extravagant anachronism but eventually proved to have been as far ahead of his time as people had thought he had been behind it.' Rory was only 50 years old when he died. He is sur- vived by his wife and four children, by his brothers Alexander and John, and by his sister Kisty, whose sense of loss will be shared by his huge circle of friends. rr he McEwens are not the only family 1 with Spectator connections to have suf- fered an agonising bereavement in recent

weeks. Christopher Booker's sister Serena was buried in Dorset last week after being murdered in Thailand at the age of 27. She

was a girl of extraordinary energy, ebul- lience, and independence who had set out by herself on a sightseeing holiday that was eventually to have taken her to Burma. But after visiting a temple some 150 miles north of Bangkok, she was attacked and killed, apparently by the tourist guide who had shown her round. At the time of her death, Serena Booker was employed by the historian Alistair Horne as a researcher for his official biography of Harold Macmillan. In this capacity she had made a special study of Macmillan's role in the decision by Britain after the war to send back to the Soviet Union thousands of White Russians sought by the Stalin government, many of them to their deaths. The exposure of this scandal has been, as readers will know, a cause pursued by Christopher Booker in the Spectator. What readers will not know is the extent to which his articles were based on his sister's research. Only when Alistair Home's book is published will we read his assessment of Macmillan's role. Whatever this is, it will owe a great deal to Serena Booker's tireless industry.

Ifyou are going to get very ill, choose your complaint carefully. Get multiple sclerosis, demand a kidney transplant, anything. But do not claim to be suffering from Total Allergy Syndrome. If you do, it doesn't matter how ill you are; in the end you will forfeit everybody's sympathy. This is understandable in its way. It is very dif- ficult to believe that there is such a thing as an allergy to everything. But the fact re- mains that Miss Sheila Rossall, the former singer who was flown back this week from California at a cost of £21,000 to the British taxpayer, is obviously very ill. I cannot believe that the Foreign Office would have flown her back to Bristol at such expense, her face covered by an oxygen mask, unless this was the case. But everybody is furious with her. Most furious of all is a woman called Mrs Annette Ellery who was respon- sible for raising £65,000 to send her for a cure in Dallas. 'I wanted a fairy-tale ending,' she said. 'I wanted to see Sheila walk down the steps of the plane and show everybody who had given to the fund that she had recovered.' How beastly of Sheila to have let Mrs Ellery down in this way, by not recovering! How wicked and incon- siderate of her to go on being ill! This is a view clearly shared by thousands of people, including various old age pensioners who resent the allocation to her of a flat in Bristol. They all seem to believe that she deserves to die. She may be a spoilt, self- centred little hypochondriac, but I feel very sorry for her all the same.