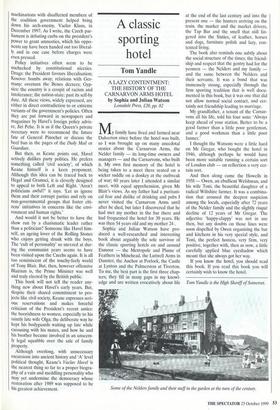 A LAZY CONTENTMENT: THE HISTORY OF THE CARNARVON ARMS HOTEL by Sophia and Julian Watson Lonsdale Press, £20, pp. 82

My family have lived and farmed near Dulverton since before the hotel was built, so I was brought up on many anecdotal stories about the Carnarvon Arms, the Nelder family — its long-time owners and managers — and the Carnarvons, who built it. My own first memory of the hotel is being taken to a meet there seated on a wicker saddle on a donkey at the outbreak of war; 60 years later I attended a similar meet, with equal apprehension, given Mr Blair's views. As my father had a puritani- cal fear and dislike of drinking and pubs I never visited the Carnarvon Arms until after he died, but later I discovered that he had met my mother in the bar there and had frequented the hotel for 30 years. He was then 54 years old and my mother 24 .

Sophia and Julian Watson have pro- duced a well-researched and interesting book about arguably the sole survivor of the classic sporting hotels on and around Exmoor — the Metropole and Plume of Feathers in Minehead, the Luttrell Arms in Dunster, the Anchor at Porlock, the Castle at Lynton and the Palmerston at Tiverton. To me, the best part is the first three chap- ters; they fill in many gaps in my knowl edge and are written evocatively about life at the end of the last century and into the present one — the hunters arriving on the train, the market and the market drivers, the Tap Bar and the smell that still lin- gered into the Sixties, of leather, horses and dogs, furniture polish and lazy, con- tented living.

The book also reminds one subtly about the social structure of the times, the friend- ship and respect that the gentry had for the yeomen — the Nelders and my family and the same between the Nelders and their servants. It was a bond that was immensely strong, especially through the firm sporting tradition that is well docu- mented in this book, but it was one that did not allow normal social contact, and cer- tainly not friendship leading to marriage.

I thought the Watsons were a little hard on Mr Gregar, who bought the hotel in 1946, although perhaps he would have been more suitable running a certain sort of London club — on reflection a very cer- tain sort.

And then along came the Howells in 1958 — Owen, an ebullient Welshman, and his wife Toni, the beautiful daughter of a radical Wiltshire farmer. It was a combina- tion that aroused the deepest suspicion among the locals, especially after 72 years of the Nelder family and the slightly risque decline of 12 years of Mr Gregar. The adjective 'happy-clappy' was not in use then, but any doubts on those lines were soon dispelled by Owen organising the bar and kitchens in his very special style, and Toni, the perfect hostess, very firm, very positive, together with, then as now, a little carefully applied blue eyeshadow which meant that she always got her way.

Tom Yandle is the High Shenff of Somerset.

Some of the Nelders family and their staff in the garden at the turn of the century.