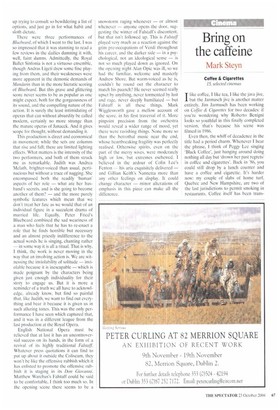 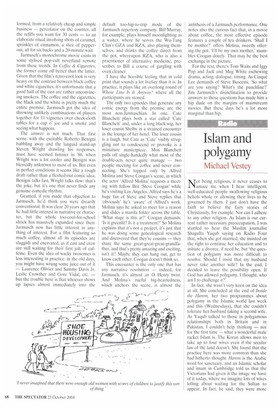 Bring on the caffeine

T like coffee, I like tea, [like the java jive, 1 but the Jarmusch jive is another matter entirely. Jim Jarmusch has been working on Coffee & Cigarettes for two decades: if you're wondering why Roberto Benigni looks so youthful in this finally completed version, that's because his scene was filmed in 1986.

Even then, the whiff of decadence in the title had a period charm. Whenever I hear the phrase, I think of Peggy Lee singing 'Black Coffee', just hanging around doing nothing all day but 'drown her past regrets/ in coffee and cigarettes'. Back in '86, you could still drop by a lunch counter and have a coffee and cigarette. It's harder now: my couple of slabs of home turf, Quebec and New Hampshire, are two of the last jurisdictions to permit smoking in restaurants, Coffee itself has been trans formed, from a relatively cheap and simple business — percolator on the counter, all the refills you want for 30 cents — to an elaborate ritual involving shots of caramel, sprinkles of cinnamon, a slice of pepperoni, all for six bucks and a 20-minute wait.

Jarmusch's monochrome movie exists in some stylised pop-cult neverland remote from these trends. In Coffee & Cigarettes, the former come off better than the latter. Given that the film's retro-cool look is very heavy on the contrast between black coffee and white cigarettes, it's unfortunate that a good half of the cast are rather unconvincing smokers. The coffee and the cigarettes, the black and the white is pretty much the entire premise. Jarmusch got the idea of throwing unlikely combinations of players together for 11 vignettes over check-cloth tables for a cup o' joe and a smoke and seeing what happens.

The answer is not much. That first scene, with the excitable Roberto Benigni babbling away and the languid stand-up Steven Wright drawling his responses, must have seemed funnier in '86, when Wright was a lot cooler and Benigni was blessedly unknown to most of us. But even in perfect conditions it seems like a rough draft rather than a fleshed-out comic idea. Benigni talks fast, Wright talks slow: that's the joke, but it's one that never finds any genuine comedic rhythm.

Granted, if you made that objection to Jarmusch, he'd think you were drearily conventional. It was clear 20 years ago that he had little interest in narrative or character, but the whole too-cool-for-school shtick has massively expanded since then: Jarmusch now has little interest in anything of interest. For a film featuring so much coffee, almost all its episodes are sluggish and enervated, as if cast and crew are still waiting for their first jolt of caffeine. Even the idea of wacky twosomes is less interesting in practice: in the old days, you might have wrung some juice out of it — Laurence Olivier and Sammy Davis Jr, Leslie Crowther and Gore Vidal, etc. — but the trouble here is that whoever shows up lapses almost immediately into the default too-hip-to-trip mode of the Jarmusch repertory company. Bill Murray, for example, plays himself moonlighting as a waiter, where he serves the Wu-Tang Clan's GZA and RZA, also playing themselves, and drinks the coffee direct from the pot, whereupon RZA, who is also a practitioner of alternative medicine, prescribes to Bill a course of gargling with oven cleaner.

I have the horrible feeling that in cold print that sounds a lot livelier than it is. In practice, it plays like an overlong round of Whose Line Is It Anyway? where all the participants are stoned.

The only two episodes that generate any comic energy from the premise are the most non-Jarmuschian. In one, Cate Blanchett plays both a star called 'Cate Blanchett' and, under a long black wig, her loser cousin Shelby in a strained encounter in the lounge of her hotel. The loser cousin is a laugh, but Cate as 'Cate' visibly struggling not to condescend or provoke is a miniature masterpiece. Miss Blanchett pulls off single-handedly what most of the double-acts never quite manage — two people meeting for coffee and never connecting. She's topped only by Alfred Molina and Steve Coogan's scene, in which the actor 'Alfred Molina' requests a meeting with fellow Brit 'Steve Coogan' while he's visiting Los Angeles. Alfred says he's a huge fan of Steve and Steve replies that `obviously' he's 'aware' of Alfred's work. Molina says he asked to meet for a reason and slides a manila folder across the table. 'What stage is this at?' Coogan demands. 'Is it greenlit? Is it a treatment?' So Molina explains that it's not a project, it's just that he was doing some genealogical research and discovered that they're cousins — they share the same great-great-great-grandfather, and that's pretty amazing and exciting, isn't it? Maybe they can hang out, get to know each other. Coogan doesn't think so.

This encounter is the only one that has any narrative resolution — indeed, for Jarmusch, it's almost an 0 Henry twist. And Molina's rueful big-heartedness, which anchors the scene, is almost the antithesis of a Jarmusch performance. One notes also the curious fact that, in a movie about coffee, the most effective episode features a couple of tea drinkers. 'Shall I be mother?' offers Molina, sweetly offering the pot. 'I'll be my own mother,' mumbles Coogan dourly. That may be the best exchange in the picture.

For the rest, there's Tom Waits and Iggy Pop and Jack and Meg White eschewing drama, acting, dialogue, timing. As Cinque Lee demands of Steve Buscemi, 'So what are you saying? What's the punchline?' Jim Jarmusch's disinclination to provide answers to those questions has made him a hip dude on the margins of mainstream movies. But these days he's a lot more marginal than hip.