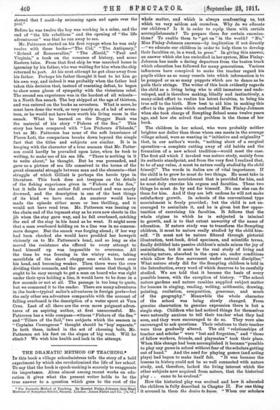 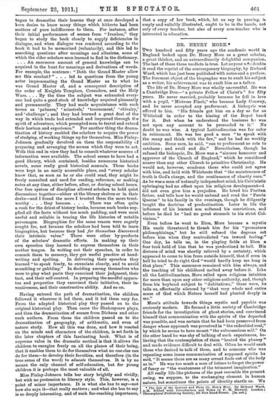 THE DRAMATIC METHOD OF TEACHING.*

TN this book a village schoolmistress tells the story of a bold experiment by which she revolutionized the life of her school. To say that the book is epoch-making is scarcely to exaggerate its importance. Alone almost among recent works on edu- cation it gives what the present writer holds to be the true answer to a question which goes to the root of the • The Dramatic Method of Teaching. By Harriet Finlay-Johnson (late Head Mistress of Sompting School, Sussex). London James Nisbet and Co. [Is. Cd.] whole matter, and which is always confronting as, but which we very seldom ask ourselves. Why do we educate our children ? Is it in order to equip them with certain accomplishments P To prepare them for certain examina- tions? To enable them to " get on " in the world ? " No," Miss Finlay-Johnson answers—by implication if not directly —" we educate our children in order to help them to develop their faculties or, in a word, to grow." In giving this answer, an answer which she has embodied in her system, Miss Finlay- Johnson has made a daring departure from the beaten track which education has followed for many generations. Various influences have conspired to make the teacher regard his pupils either as so many vessels into which information is to be pumped or as so many puppets which are to dance as lie pulls their strings. The writer of this book evidently regards the child as a living being who is still immature and unde- veloped, and is therefore making, blindly and instinctively, a many-sided effort to realize his latent faculties, to bring his true self to the birth. How best to aid him in making this effort is the problem which confronted Miss Finlay-Johnson when she took charge of Sompting School some twelve years ago, and how she solved that problem is the theme of her book.

The children in her school, who were probably neither brighter nor duller than those whom one meets in the average village school, were so wanting in "initiative and originality" that, in our author's words, " nothing short of a surgical operation—a complete cutting away of old habits and the formation of a new school tradition—would meet the case. The first aid which I invoked was nature study, mainly from its esthetic standpoint, and from the very first I realized that, to be of any value, A must be nature really studied by the child himself." The words in italics are of vital importance. If the child is to grow he must do two things. He must take in and assimilate the nourishment that is provided for him, and he must duly exercise his organs and faculties. These two things be must do by and for himself. No one else can do them for him. And if they are left undone he will not make satisfactory growth. In schools of the conventional type nourishment is freely provided ; but the child is not en- couraged to assimilate it, and be is given but few oppor- tunities of exercising his faculties. It follows that the whole regime to which he is subjected is inimical to growth, and is to that extent unworthy of the name of education. If nature study was to transform the Sompting children, it must be nature really studied by the child him- self. "It must not be nature filtered through pictorial illustration, text-book, dried specimen, and scientific terms, finally dribbled into passive children's minds minus the joy of assimilation, but it must be the real study of living and working nature, absorbed in the open air, under conditions which allow for free movement under natural discipline." What nature study did for the Sompting children is told in the Introduction, every word of which deserves to be carefully studied. We are told that it became the basis of every possible lesson, with the exception of history. " The school nature gardens and nature rambles supplied subject matter for lessons in singing, reading, writing, arithmetic, drawing, painting, recitation, composition, grammar, and much of the geography." Meanwhile the whole character of the school was being slowly changed. From genuine observation to genuine expression there is but a single step. Children who had noticed things for themselves were naturally anxious to tell their teacher what they had seen, and they were encouraged to do so. They were also encouraged to ask questions. Their relations to their teacher were thus gradually altered. The old " relationships of teacher and scholar" were "lost and forgotten," and "those of fellow workers, friends, and playmates" took their place. When this change had been accomplished it became "possible to play any game in school without fear of the scholars getting out of band." And the need for playing games (and acting plays) had begun to make itself felt. " It was because the lessons in history could not be so well connected with nature study, and, therefore, lacked the living interest which the other subjects now acquired from nature, that the historical play . . came to be evolved."

How the historical play was evolved and how it educated the children is fully described in Chapter II. For one thing it aroused in them the desire to know. " When our scholars began to dramatize their lessons they at once developed a keen desire to know many things which hitherto had been matters of pure indifference to them. For instance, after their initial performance of scenes from "Ivanhoe," they began to study the book closely to supply deficiencies in dialogue, and when dialogue was rendered according to the book it had to be memorized (voluntarily), and this led to searching questions after meanings and allusions, some of which the elder scholars soon learned to find in the dictionary.

. . . An enormous amount of general knowledge can be acquired in the hunt for meanings and derivations of words. For example, the sentence : " Doth the Grand Master allow me this combat? " . . . led to questions from the young actor impersonating the Grand Master as to what he was Grand Master of, and a consequent description of the order of Knights Templars, Crusaders, and the Holy Wars. . . . By the time the subject was exhausted every- one had quite a good stock of knowledge acquired pleasantly and permanently. They had made acquaintance with such terms as 'palmers,' minstrels,' `tournament,' chivalry,' and challenge' ; and they had learned a great deal of the way in which trade had extended and improved through tie spirit of adventure, which prompted men to travel and extend their horizon and experience." For another thing the drama- tization of history enabled the scholars to acquire the power of studying, of working things up for themselves. Miss Finlay- Johnson gradually devolved on them the responsibility cf preparing and arranging the scenes which they were to act. With this end in view they had to consult whatever sources of information were available. The school seems to have had a good library, which contained, besides numerous historical novels, some really good historical manuals. These books were kept in an easily accessible place, and "every scholar knew that, as soon as he or she could read, they might be freely consulted and used for reading, reference, or making notes at any time, either before, after, or during school hours. Our free system of discipline allowed scholars to hold quiet discussions together—either at the library shelves or in their desks—and I found the more I trusted them the more trust- worthy . . . they became. . . . There was often quite a rush for the driest of history books, because such books sup- plied all the facts without too much padding, and were most useful and reliable in tracing the life histories of notable personages. Biographies for the same reason were eagerly sought for, not because the scholars had been told to learn biographies, but because they had for themselves discovered their intrinsic value." There were other by-products of the scholars' dramatic efforts. In making up their own speeches they learned to express themselves in their mother tongue. In writing out their speeches, in order to commit them to memory, they got useful practice at hand- writing and spelling. In delivering their speeches they learned " to speak freely, to enunciate clearly, and to avoid mumbling or gabbling." In deciding among themselves who were to play what parts they exercised their judgment, their tact, and their self-control. In preparing the needful appara- tus and properties they exercised their initiative, their in- ventiveness, and their constructive ability. And so on.

Having entered the path of dramatization, the children followed it wherever it led them, and it led them very far. From the adapted historical play they passed on to the original historical play. Then came the Shakespeare plays, and then the dramatization of scenes from Dickens and other such authors. From these the children passed on to the dramatization of geography, of arithmetic, and even of nature study. How all this was done, and how it reacted on the minds and characters of the children, is set forth in the later chapters of this fascinating book. What is of supreme value in the dramatic method is that it allows the children to energize freely on all the planes of their being, that it enables them to do for themselves what no one else can do for them—to develop their faculties, and therefore (in the true sense of the word) to educate themselves. It is by no means the only channel of self-education, but for young children it is perhaps the most valuable of all.

Miss Finlay-Johnson tells her story brightly and vividly, but with no pretension to literary style. This, however, is a point of minor importance. It is what she has to say—not how she says it—that really matters ; and what she has to say is so deeply interesting, and of such far-reaching importance, that a copy of her book, which, let us say in passing, is amply and suitably illustrated, ought to be in the hands, not only of every teacher, but also of every non-teacher who is interested in education.